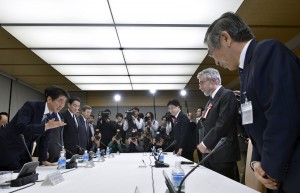 With the Kumamoto earthquakes in mid-April causing unforeseen changes to political and financial schedules, the biggest focus of attention is on the consumption tax increase (from 8% to 10%) planned for April 2017. With countless statements being made on when or even if it should be implemented, special adviser to the Cabinet and former Ministry of Finance bureaucrat Etsuro Honda argues for freezing the hike: “Until the Japanese economy has completely escaped deflation and a stable inflation rate of approximately 2% can be maintained, the consumption tax must not be raised.” (Photo: Pool/ Reuters/ AFLO)

The reason he advocates freezing is due to the unanticipated drop-off in consumer spending. With consumer spending for the third quarter in 2015 (October to December) decreasing by 0.5% compared to the same time the previous year, Honda points out “The decline in spending is wide ranging, from durable goods such as automobiles and home electronics to semi-durable goods such as clothes and shoes, and cannot be explained simply as the effect of a warm winter.” Saying that an obvious reason is the consumption tax increase (from 5% to 8%) in April 2014, he states “Japan’s economy showing no signs of recovery since the decline in consumer confidence is a critical issue.” He also argues that “A lesson we must learn from the consumption tax hike two years ago is that due to the long-term deflation, the income structure and consumption behavior of people in Japan has changed significantly.”

At the first meeting of the Japanese government’s International Finance and Economic Assessment Council on March 16, Colombia University professor Joseph Stiglitz said that the economy in 2015 was the worst it had been since the 2008 financial crisis, but that it “will be even weaker in 2016.” Given this, Honda comments on the consumption tax hike: “A delay until a specific time means it is possible consumers will just think ‘There will be another tax hike next year anyways,’ and so try to be frugal and refrain from spending.” He even goes so far as to declare “I hope Prime Minister Abe will make the decision to freeze the tax hike, without making it a only a delay of one or two years, as soon as possible in order to send the public the message that they do not have to worry.”

At the same time, on the topic of future economic management Honda says “Increasing the real GDP is the responsibility of the government, increasing the inflation rate is the Bank of Japan’s responsibility,” and emphasizes that “If the government and the Bank of Japan do not work together on economic growth, reaching the goal of a nominal GDP of 600 trillion yen will be impossible.”

・Taro Yayama, “The hubris and delusions about Kakuei Tanaka,” Voice, May issue

With this year marking 23 years since the death of former Prime Minister Kakuei Tanaka (in office from 1972-1974) and 40 years since his arrest for the Lockheed scandal, a new “Kakuei boom” has been sweeping the publishing industry. Political analyst Taro Yayama argues against this Kakuei boom: “In Shintaro Ishihara’s recent book Tensai, I was shocked to see him praising Kakuei Tanaka as a great politician. Tanaka was a great politician clothed in corruption.”

Generally, Tanaka is remembered for promoting the “Plan for Remodeling the Japanese Archipelago” and contributing to “balanced national land development” in his home prefecture of Niigata and other areas with public infrastructure projects for highways, a Shinkansen line, and airports. However, Yayama disagrees with this view: “Ishihara is of the opinion that Kaku-san worked on developing national land based on a concept of what Japan would be like today, but I cannot believe Tanaka was such an idealist.” He argues that the true nature of Tanaka’s politics was plutocratic: “Tanaka gained power by proclaiming the importance of public works projects to gather money, which he then used to gain more followers, and it is not surprising that he lost power when he did.”

Author and former governor of Tokyo Shintaro Ishihara, whose recent first-person account of the life of Kakuei Tanaka, Tensai, sold 450,000 copies, writes himself that he was “The very first to attack Kakuei Tanaka for his money politics.”

However, regarding the former prime minister, Ishihara states “There is no question that it is Kakuei Tanaka who built the Japan of today.... No other politician had nearly as much vision as Kaku-san,” in a complete reversal of his opinion. He explains his reasons by writing “Thinking back on it now, plutocracy had been at the core of the LDP for years.... In order for someone who was in no way part of the establishment to...become prime minister, the fact is he had no choice but to apply the principles of money politics.”

University of Tokyo professor emeritus Takashi Mikuriya states that “Building infrastructure to help consolidate economic growth, such as highways, the Shinkansen, and regional airports, was the greatest success of Tanaka’s administration,” but also comments that the recent Kakuei boom is a reflection of the lack of effective Japanese politicians today. Looking back, Kakuei Tanaka’s former secretary Akira Asaka says “When discussing the negatives of the Tanaka administration, the Lockheed scandal and plutocracy are always criticized. However, I believe that the fact he did not groom a successor, laying out a path for them to follow, is an even greater sin to commit as a politician.”