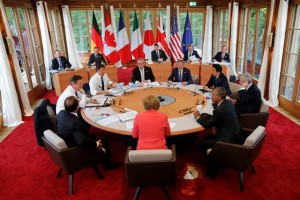 ・Makoto Iokibe, “Returning to the roots of international cooperation and the free market,” Gaiko, May issue

The G7 Summit will be held in Ise-Shima, Mie on May 26 and 27. Prefectural University of Kumamoto president and scholar of international politics Dr. Makoto Iokibe provides his analysis that with global issues such as the increasingly uncertain global economy and repeated terrorist attacks, “A situation has developed in which greater importance is being placed on the role of the G7 as a ‘protector of order.’” He also states that the Ise-Shima Summit will work towards international stability based on international cooperation through the United Nations and free market systems such as the IMF and GATT. (Photo: AP/ AFLO)

This will be the 42nd summit, and this will be the sixth time it is held in Japan, eight years since it was last held here. Iokibe mentions the historical importance of these summits to Japan, writing that “Despite Japan declaring its ‘three principles for foreign policy’ (created in 1957: focus on United Nations, Japan as a member of Asia, and cooperation with the free world) it had remained focused on bilateral relations with the USA. The summits gave Japan an opportunity to acquire a global perspective by including Europe in their perspective.”

However, his analysis of trends in the G20, including nations such as China and India who have been increasing their influence since the global financial crisis in 2008, is that “The positions and sources of dissatisfaction of these countries differ with those of developed countries, and there is no sense of responsibility to attempt to create a consensus of opinions and help stabilize international order.” In fact, he even stated that the G20 is “in danger of moving towards overturning the status quo and breaking down order.”

This will be Prime Minister Shinzo Abe’s fifth G7 Summit. Iokibe states that “having a stable government with a strong power base is a major plus for foreign policy,” but points out weaknesses along with strengths. Some strengths he lists include strengthening the Japan-USA axis, visiting 63 countries and regions, and working on joint projects. Iokibe says these examples show how Abe has “worked on building relations with countries other than G7 members.”

For weaknesses, he mentions the progress of Abenomics and its aggressive monetary easing, fiscal stimulus, and easing of regulations. Iokibe warns “But the economy is now in a difficult situation. If it is pushed too hard, it may stumble.”

・Yasumasa Nagamine, Tetsuya Jitsu and Masayuki Tadakoro (Discussion), “Turning Japan’s experience, as one of the first countries to deal with certain problems, into a shared asset,” Gaiko, May issue

Deputy Minister for Foreign Affairs Yasumasa Nagamine, who acts as a sherpa to prepare for the G7 summit, commented broadly on topics for the Ise-Shima Summit. Regarding the role of the G7, considering its basic premise as “a collection of democratic nations,” he emphasized its desired role as “Working on coordinated policies, establishing guidelines for solving problems, acting independently, and providing a map to international society for actions to take.”

On the topic of the relationship between the G7 and G20, he said “there is no need to consider them as being in opposition” and “policy coordination in this area (international economics, including trade) is mainly carried out by the G20,” but since emerging nations’ economies have entered a period of adjustment he noted that “With this environment where the G7 may take the lead again when it comes to the economy, in recent years there has been a trend towards reevaluating the value and role of the G7.”

Keio University professor Dr. Masayuki Tadokoro said the themes he would like to focus on are “finance, refugees, democracy, and the South China Sea,” and pointed out the danger that “with the ongoing deflation worldwide, exchange rates may become a political problem.” In response, Nagamine stated “Abenomics quickly moved forward with a combination of the three factors of monetary policy, fiscal policy, and structural policy, and is leading the discussion,” and so his opinion was that the issue of the exchange rate would not become a political problem.

Regarding the refugee crisis, Nagamine said that although “Japan is only directly accepting a small number of refugees... Aid has been actively provided to countries near Syria as a central part of Japan’s policy on the Middle East. This is also true of the countries in the Balkan Peninsula, which are part of the ‘route’ the refugees are taking through Europe.” He explained Japan’s stance towards the refugee crisis as “interpreting the global context and discussing a broad menu of options.”

Nagamine listed three themes Japan has set for itself: promotion of high-quality infrastructure, international health initiatives, and “a society in which women shine.” He argued that initiatives should be implemented to help fill the yearly trillion dollar gap in supply and demand for international infrastructure. Saying that international health is “an area that Japan has focused on in particular at previous summits,” he stated his belief that the country would expand even more effort on the state of international health funds and public health risks, as well as promoting widespread adoption of healthcare services based on the concept of universal health coverage for everyone from newborns to seniors.

Scholar of international politics and University of Tokyo professor emeritus Dr. Shinichi Kitaoka notes the importance of the “human security” policies Japan has been promoting for many years. He emphasizes that “Over four million people have been driven from their country (Syrian refugees). Even if Japan cannot accept a large number of refugees, many people will sympathize with the idea of sheltering those who are vulnerable.”

He also states that “Continued efforts such as these will help demonstrate Japan’s importance to the world. Occupying ‘an honored place in an international society’ is even mentioned in the preamble to the Constitution of Japan.”