The security environment surrounding Japan is tenser than ever, and growing more unstable. Kyoto University Professor Emeritus Terumasa Nakanishi is raising the alarm over the Japanese government’s current perception of China, stating “...at this time, it is important to calmly reassess China, and take a perspective that reflects reality.”

Regarding reports in February that the UN Security Council is moving to strengthen sanctions on North Korea after its fourth nuclear test, Nakanishi writes that he was surprised at reports saying “’The Japanese government was originally optimistic about being able to quickly obtain cooperation from the Chinese government,’” and states “...this perception of China is outdated.” After mentioning that the elites of the USA had been stuck with the idea that if they helped China it would eventually democratize and become peaceful, Nakanishi provides his analysis that “American influence is a large part of the reason that Japan has yet to acquire an accurate perspective of China.” He also states that the USA’s perception of China has begun changing, and warns “Currently, the USA wants Japan to cooperate in taking action against China, but it is time to seriously consider the risk of the USA pulling the rug out from under Japan.”

On the topic of what the future perception of China should be, and how China should be dealt with, Nakanishi argued “...it is necessary to shift from foreign policy based on the slogan of ‘universal values’ to more realistic foreign policy.” He also states that in order for Japan to pursue its national interests in a multipolar world after the passing of the American hegemony “... foreign policy will need to include ‘assertiveness’ and ‘keen awareness to hedge risks.’ There are some issues, such as territorial disputes, where no leeway can be given. For other national interests, it will be necessary to build a truly strategic relationship with China, appropriate to the new era.”

・Yoshihiro Makino, “Kim Jong-un: The day of a dangerous outburst is near,” Bungeishunju, April issue

How will the issue of North Korea, the biggest source of uncertainty in East Asia, play out? Asahi Shimbun’s Seoul Bureau Chief Yoshihiro Makino provides his analysis of Kim Jong-Un’s personality, and the intent behind his actions such as “Arbitrarily carrying out a fourth nuclear test, and then launching a long-range ballistic missile before the UN Security Council even adopted the resolution for sanctions has made China and Russia, some of North Korea’s only allies, lose face. Or executing the top-ranking military leader despite increasing military tensions with Japan, South Korea, and the USA.”

Makino writes that Kim Jong-Un is definitely afraid of the threat posed by South Korea and the USA, and “the only thing he is concerned with is maintaining the status quo and his own position,” possibly due to his father Kim Jong-Il’s telling him “how to control the military” before he died. Having analyzed a report by the American government, he writes that their results found Kim Jong-Un was “dangerous, violent, unpredictable, and had delusions of grandeur.” Makino also mentions the opinion of a South Korean official that “’...he might not be stupid, but he is unaware of the international situation,’” and that his actions can be understood as “While constantly presenting himself as ‘being great,’ the gap with reality stresses him, and so he grows angry with those who do not respect him, and executes them.”

Under the regime of Kim Jong-Un, North Korea has been taking disquieting actions. Makino argues that “...in order to solve the North Korea nuclear issue, cooperation with the governments of China and the USA is indispensable.” However, it is also true that there is little progress in discussions to bring together the interests of the USA, which is focused on the denuclearization of North Korea, and China, which wants to maintain the status quo in North Korea. In response to increased tensions with North Korea, until now the USA has been the one to put the brakes on its ally South Korea. This time, however, “...they’ve become so focused on competing with China that they are keeping their foot on the gas with tensions in the Korean Peninsula.... Now, China is the only one who can put on the brakes.” Regarding the Japanese government’s insistence that “... ‘We will not close the door on dialogue’” even in this situation, Makino is critical: “This insistence may seem like the right thing to do, but it must be said that it is an extremely ignorant stance to take towards North Korea.”

・Yutaka Matsuo, “When the language barrier is gone, will you be able to compete globally,” Chuokoron, April issue 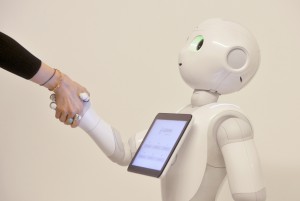 In March this year, the world was shocked by news that a world-class Go player lost to AlphaGo, a computer program. With humans already having lost to computer programs in other games such as shogi and chess, Go was considered the last redoubt of humanity. The world is in the midst of a new artificial intelligence (AI) boom. (Photo: AP/ AFLO)

Tokyo University School of Engineering Specially Appointed Associate Professor Yutaka Matsuo says this is the third AI boom, and that “This boom might lead to rapid progress for artificial intelligence.” He explains that this is due to the development of deep learning technology, which uses large quantities of data to, for example, drastically improve image recognition. “Computers have finally gained this ability that was thought to be difficult for something that isn’t human. Based on this ability for ‘recognition,’ there is the possibility of the roles computers fulfill expanding exponentially. If development progresses smoothly, within the next few years or decades AI technology might begin to be used throughout the world in a number of areas, and have a major economic impact.”

Matsuo argues that by incorporating more advanced AI in fields where machinery and robotics are already widely used such as agriculture, construction/architecture, and healthcare, “...it will be possible to gather data from actual workplaces, and contribute to improved efficiency.” He also explained his opinion that, as a country known for its manufacturing, Japan “...should be able to compete globally by combining its high-quality industrial products with AI. This is an opportunity Japan cannot afford to miss.”

Matsuo also writes that AI is growing closer to learning languages, and there is the possibility that the language barrier that has proven so difficult for Japanese people may vanish. “...Japan has many products and unique social systems that have received praise from around the world, but there is also no counting how much has been overlooked due to the issue of language. Without a language barrier, these unknown Japanese products may become the focus of attention and end up as leaders in the world marketplace.”

In a similar vein, Industrial Growth Platform, Inc. Representative Director and CEO Kazuhiko Toyama states that “AI moving into the physical world has the potential to completely change the structure of industry.” However, in order for AI to be applied to robotics engineering, autonomous driving, or automated factories, advancements need to be made in hardware as well. He brings up the example of reports that Google and Ford would be cooperating on autonomous driving, and argues “Japan is a world leader when it comes to mechanical engineering for hardware. If it can combine the world’s top mechanical engineering and information industry, Japan can remain competitive.”

Toyama mentions Japan’s strict regulations as an issue for further development of AI. Although AI develops by encountering vast quantities of data out in the real world, regulations for areas such as healthcare, nursing, and public transportation are particularly strict, and so it is currently difficult to carry out real-world experiments. “...attempts to automate these industries end up conflicting with existing business models. However, AI is being applied in societies throughout the world, and a safe autonomous car may be developed while we carefully debate these issues.... The interests of corporations and governments do not always align.... The decision of what to do as a country must be made soon.”