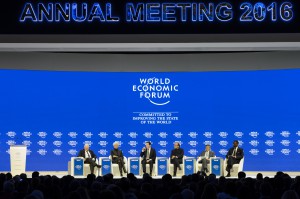 The global economy has been worsening noticeably since the beginning of 2016. Modern China scholar Toshiya Tsugami writes that the reason for this is “The BRICs bubble that started in 2003 has collapsed.” He then analyzes the state of the economy of China, a central figure in BRICs that is often blamed as the root cause for the worsening of the world economy. (Photo: AP/ AFLO)

Tsugami begins by stating that “Neither ‘the Chinese economy will soon bottom out’ nor ‘China will implement a major stimulus package’ are true.” The reason being, the urgent problem facing the Chinese economy is whether it can escape from the aftereffects of the investment bubble brought about by “the delusion that ‘China’s economic miracle will keep going,’” and much like Japan after its bubble collapsed, and the USA after the collapse of the IT bubble and the sub-prime loan bubble, a recovery in the short term does not seem likely.

His view of China’s economy is that “...it is not slowing down uniformly, with uniformly dim prospects; it is a mosaic pattern of light and dark.... Choosing where and what part of the Chinese economy to focus on may be important now.” Tsugami describes the challenges that must be overcome as “Developing the new economy, and downsizing the old economy with its excess debt, infrastructure, and workers, in order to shift production factors such as labor.” While the growth of the new economy, such as IT companies, has progressed relatively far, he says that the downsizing of the old economy such as heavy industry isn’t keeping pace.

Another issue troubling the Chinese government according to Tsugami is “speculation on a devalued yuan,” which he explains “This is happening because Chinese people who think ‘the yuan is going to get weaker’ change their yuan into foreign currency at every opportunity they get, and Chinese companies that have borrowed foreign currency are desperately redeeming those loans as soon as possible.” If the drastic decrease in foreign currency reserves this has caused continues, he points out that “... before the renminbi collapses, there will be a global currency and financial crisis.” Tsugami warns of the danger of the current situation: “Even though China now has a major impact on the global economy, there are no international standards in place for governance of this new age.”

・Hideo Tamura, “Helping the Chinese economy at the point of collapse: the Ministry of Finance’s cardinal sin,” Seiron, April issue

Speaking on China’s capital outflow at the World Economic Forum in January, Bank of Japan Governor Haruhiko Kuroda, after first stating that “This is my personal view, and it may not be shared by the Chinese authorities,” suggested that “capital controls could be useful to manage the exchange rate.” Sankei Shimbun Special Reporter Hideo Tamura harshly criticized this statement, writing that “... this is tantamount to lending a hand to President Xi Jinping, who is focused on trying to maintain the current regime.” Since capital controls by China would run counter to the condition the International Monetary Fund (IMF) set for the inclusion of the renminbi as a Special Drawing Rights (SDR) currency as of October 2016, of deregulating the financial market, the IMF cannot publicly endorse this option. On the other hand, “Considering the fact that the renminbi market rate can affect stock markets worldwide, encouraging Xi Jinping to increase capital controls and stabilize the yuan market matches the interests of the IMF.” However, Tamura argues that capital controls would be Xi Jinping’s administration “forcefully restricting the freedom of information necessary to ensure free market trading,” and through other Asian countries which rely heavily on trade with China it would make possible “an acceleration of external expansion without the worries of a yuan collapse.” He states that arguing for increased capital controls and delaying financial deregulation “... not only isn’t to Japan’s benefit, but would have the opposite effect.”

・Ryoji Musha, “Payment for the most excessive investment in history has begun,” Voice, April issue

Musha Research President Ryoji Musha, an economist, argues that the current situation of falling stock prices, a weak currency, and capital outflow is the same set of three conditions that caused the 1997 Asian financial crisis, and that capital controls are necessary to stabilize global financial markets. His analysis is that “... if the current capital outflow continues, China will run out of foreign currency in less than a year.” Comparing the situation with the “Japan Disease,” when Japan’s nominal GDP remained flat for 20 years after the collapse of the bubble, his view is that “... It is necessary to consider the possibility that China will be facing a crisis significantly worse than being afflicted with ‘Japan Disease.’” Musha approves of BOJ Governor Kuroda’s proposal for China to implement capital controls, and considering reports that negotiations are underway to reinstate the currency swap agreement between the BOJ and Bank of China that expired in 2013, stated that “This gives an indication that preparations for the BOJ to provide support are proceeding behind the scenes. There is an urgent need to create a contingency plan to avoid an international financial crisis starting in China. There are significant expectations of the role that will be played by Kuroda’s BOJ.”

On the topic of the current situation of developed economies, including Japan, Okina starts by explaining “the relationship between the market interest rate and ‘the actual interest rate brought about by full employment (natural interest rate).’” According to him, due to factors such as the declining population, stagnation of technological progress, growing inequality of income distribution, and increasing savings rate, a long-term decline in the natural interest rate is becoming a global trend. Remarking on the BOJ’s policies so far considering this situation, Okina comments “... the BOJ, based on the unrealistic goal of reaching 2% inflation within two years, tried to reach their target quickly by adopting a qualitative and quantitative easing framework involving buying government bonds on a large scale. With additional easing, the amount of bonds being purchased was further increased to 80 trillion yen a year, shortening its longevity.”

He also believes the implementation of a negative interest rate will cause issues, writing “... negative interest on bonds may appear at first glance to indicate the trust investors have in Japanese government bonds, causing the delusion that the government can issue bonds and reap the benefits of that interest based on investor trust.” Okina mentions that these factors can negatively impact proper financial administration, warning “... they could impede initiatives for financial reform.” He also states that “... once again, they have tried to increase the policy’s impact by deceiving the market,” which led to market instability. Okina concludes by saying that instead of repeatedly making surprises, it is urgent that “... the government and private actors work together to determine how to stop the decline of the natural interest rate.”

Nihon University Professor Kazuo Mizuno writes that this situation, with commodity prices and growth rate not increasing even with the BOJ having gone as far as implementing a negative interest rate as part of efforts to increase monetary easing, is not just a developed economy stagnating, but emblematic of the limits of capitalism as a system. He explains that receiving interest became legitimized around the 13th century, leading to the concept that “currency becomes capital” (=it is not just a rock) but now 800 years later the interest rates of developed countries are on a downward trend, with extremely low interest rates continuing over the long term in Japan as well. “In other words, the money that is being exchanged has returned to being ‘rocks.’ Now, with the implementation of a negative interest rate, the return on a ten-year government bond has become temporarily negative for the first time in Japan. Even the ‘rocks’ have started to be chipped away at.”

Mizuno describes the BOJ’s introduction of negative interest rates as “a surprise strategy, the third round of Kuroda’s bazooka.” He criticized this strategy as having missed its target, with its failure to stop the trend of a high-value yen and low stock prices. He says the biggest issue with the negative interest rate policy is the loss of Japanese citizens’ assets, with the ten-year bonds in particular having a negative return meaning “... there are no more safe assets,” and argues that the impact on citizens’ lives may spread further.

He writes that the circumstances that led to this situation are that the age of growth for advanced countries including Japan has ended, as well as the growth of China and other BRICs countries not going as well as hoped, and provides his analysis that “This shows that the system of capitalism was not a method to make most of humanity into the middle class.” Based on this, he argues that Japan needs to “... work to redistribute income and eliminate inequality.”

There are also positive opinions of the negative interest rate. Regarding the implementation of a negative interest rate, Meiji University Professor Yasuyuki Iida comments that it is strongly reminiscent of “a minor adjustment to correct and improve the effectiveness of the quantitative easing that had been proceeding in a distorted fashion since before Kuroda became governor.” In his opinion, “... it is nothing but a supplement to the quantitative and qualitative monetary easing policies already implemented.” While saying that its effects “remain limited,” he approves of how the implementation of negative interest rates has “allowed even greater freedom” for the BOJ’s monetary policies. In addition, he also emphasizes that it contributed to gaining “trust in continuity” that policies will continue until sufficient results have occurred. Iida also argues that if the BOJ and Japan’s national government share targets for an increase in wage growth and nominal growth rate, not just increased commodity prices, than “... if the market trusts that the government is doing all it can with fiscal policies to escape deflation, and the BOJ is doing the same with monetary policies, then Japan will soon be free from deflation.”