The Shock of the American Presidential Race/ The SMAP Commotion

■  The Shock of the American Presidential Race

・Yoshiki Hidaka, “The Trumpification of the USA,” Voice, March issue 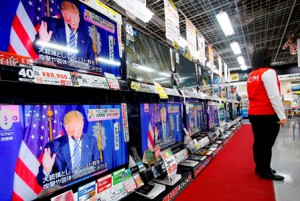 The American presidential primaries are drawing attention from around the world. The leading Democratic candidate is former Secretary of State Hilary Clinton, while the leading Republican candidate is real-estate mogul and reality TV host Donald Trump. With her experience as a politician, Clinton is no surprise, but the success of Trump has been met with shock, and there is growing concern about the impact of Trump’s popularity on international politics. (Photo: AP/AFLO)

Hudson Institute senior fellow Yoshiki Hidaka states that Trump’s popularity is only possible due to “the Obama administration distorting American politics, so the nation is no longer functioning as an organization.” He also mentioned that the core of the problem lies with the Republican Party, for which this should have been an opportunity to regain power, having collapsed into chaos: “The 2016 presidential election could have been the right time to restore normality to the abnormal situation brought about by President Obama. But as things stand, it seems the abnormality of American politics will become worse than it was for the seven years of the Obama administration.”

Hidaka is concerned that the confusion surrounding the next president will have a negative impact on the already turbulent global situation. “2016 was supposed to be an important year for the presidential election to calm the division and confusion in American politics, and clarify the country’s position and strategy. However, this presidential election is driving the USA to greater confusion and division. At this rate, America will no longer be able to fulfill its role as the world’s leader, and conflicts around the world will run the risk of worsening even further.”

・Takashi Odajima, “The truth about Japanese people as seen in the SMAP commotion,” Shincho 45, March issue

In January 2016, all of Japan was riveted by reports that SMAP, one of Japan’s most popular boy bands, was going to split up or leave their agency Johnny & Associates. In the end, they did neither, and the commotion ended with the five band members apologizing on television. Although it is true the group has been extremely popular since their debut 25 years ago, why was this story the focus of so much attention?

In the article “The truth about Japanese people as seen in the SMAP commotion” in the March issue of Shincho 45, columnist Takashi Odajima provides his analysis that the extremely “pre-modern” control that agencies exercise over their artists is a demonstration of “the relationship between organizations and individuals in Japanese society.” Regarding the televised apology, he wrote that “The SMAP members were not trying to explain anything. They did not prepare their statements of their own will. They were not announcing a decision, nor were they stating their future plans. Although they repeatedly made comments apologizing to fans, fans were not the target of their apology.” He indicated how the apology was essentially nothing more than a punishment for SMAP, and emphasized the bizarreness of the situation.

In the article “Mary, the despot who destroyed SMAP” in the March issue of Bungeishunju, journalist Ryutaro Nakamura writes that in principle, the management of the agency should have apologized, as it was an internal issue, and that “the fact that no one mentions that, with the entire industry yielding to those with the most power, just goes to show how serious the situation is.” He indicates that there is a problem with the major media outlets, who no longer question Johnny & Associates due to the control the agency has over the mass media with its many popular entertainers.