Outlook for International Affairs in 2016 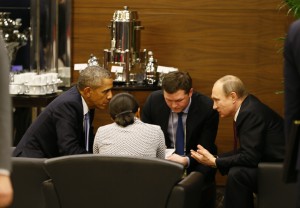 Meiji University Specially Appointed Professor Masayuki Yamauchi says “The post-Cold War era has ended, and there has been a shift to a new Cold War-style conflict structure, the Second Cold War.” Stating that “the conflict with Turkey and strengthening of relations with Iran is increasing tensions between the USA and Russia,” he provides his analysis that the historic turning points were “Putin-led 2008 invasion of Georgia (Russo-Georgian War), and the 2014 annexation of Crimea and war in eastern Ukraine.”

Ritsumeikan University Visiting Professor Kunihiko Miyake agrees with Yamauchi, saying “It is clear that the post-Cold War era has ended, and a major power shift is in progress.” However, he also gives his opinion that “With the growing trend towards nationalism and xenophobia, I believe we are returning to the power politics of the pre-World War I era, with clashing nationalistic ideologies.” Considering this state of international affairs, he suggests the policy Japan should take as the host country for this year’s G7 Summit: “As a major global power shift occurs, the strategy Japan should take to survive is to join with the winning side which shares universal values.”

Saying “Japanese foreign policy has a tendency to place too much emphasis on principles and ideals,” Yamauchi comments on the “failures of foreign policy” such as with the issue over the UNESCO Memory of the World Register, and indicates that “There was not strong enough understanding of cultural diplomacy as the front line for Japanese national interests, such as security and historical perceptions.” Furthermore, he also warns that Japanese citizens tend to be optimistic even when there are growing threats to security, and that “We also have to face the danger of terrorism actually happening here as it did in France, and the risk of other countries infringing on our sovereignty.”

■ Imperialism and the Importance of Universal Values

In the article “Prepare for the return of imperialism” in the February issue of Voice, Kunihiko Miyake, along with author and former Ministry of Foreign Affairs Chief Analyst Masaru Sato, define this state of international affairs as “imperialism.” Sato says of the repeated Islamic terrorist attacks in Europe that “ISIS is seriously intending on building a unified Islamic empire ruled by a caliph, following the laws of the one true god Allah. They have started a world war of Islamist revolution against the Western states.

Miyake also states that one of the factors the destabilization of the Middle East that gave birth to ISIS is the non-interventionist policy of the Obama administration. As a result of withdrawing most American combat troops out of Afghanistan and Iraq, “...the instability in the Middle East caused by the collapse of despotic governments is becoming the new constant.” In this chaos Miyake theorizes that “...the Middle Eastern empires of the past have been reborn. Iran, Turkey and Russia are all displaying imperialistic tendencies. This may end with Iran or Turkey making [those areas in the Middle East embroiled in conflict] into part of their empires.”

Regarding Japan’s future position on the world stage, Miyake argues: “In the new paradigm, universal values will definitely be emphasized. Therefore, we have to polish our traditional concepts in a way that they can be explained to the world as universal values. That will enable Japan to survive in international society.” He concluded by saying this would likely cause dramatic changes in Japan’s relationships with China and South Korea.