Outlook for Domestic Japanese Politics and the Economy in 2016

・Yasuyuki Iida, “Don’t repeat the mistake of 2014 with the next consumption tax increase,” Voice, February issue

The biggest event of domestic Japanese politics for 2016 is the Upper House election planned for July. With half of the 242 Upper House seats up for re-election, the focus will be on whether or not the pro-constitutional reform parties including the Liberal Democratic Party and the Komeito end the election with over two-thirds (162) of the seats. The ruling coalition already has over two-thirds of the Lower House seats, and if they reach that number in the Upper House as well then a national referendum on constitutional reforms will begin to seem more likely. Even if the LDP and Komeito win by the same margin as the last election in 2013 (76 seats) they will not reach a two-thirds majority, but if they are joined by the two other constitutional reformist parties, the Party for Japanese Kokoro (formerly the Party for Future Generations) and Initiatives from Osaka, they could reach their target.

There is also a lot of interest in whether a Lower House election will be held alongside the Upper House election. In an article titled “Will the Upper House election end with the two-thirds necessary for constitutional reform?” in the February issue of Bungeishunju, University of Tokyo professor Izuru Makihara and National Graduate Institute for Policy Studies (GRIPS) professor Harukata Takenaka suggest “it’s possible,” while Hitotsubashi University professor Koji Nakakita argues “it is not very likely.” Nakakita’s reasons include how the most recent Lower House election was determined to be in a state of unconstitutionality due to vote disparity, and how there is no good justification to dissolve the Lower House. Makihara gives his analysis on this subject: “Having succeeded in passing the security bill package, I believe Prime Minister Abe has lost sight of what he should be doing. Constitutional reform might be the only potential justification he has left.” Takenaka gives a contrasting opinion: “The dissolution and general election in 2014 proved that Prime Minister Abe prioritizes the timing being right to win an election more than he does having reasonable justification.”

Regarding the Democratic Party of Japan, the top opposition party, Nakakita states “As the possibility of a change in government grows ever smaller, the situation has become grim.... Unfortunately, the DPJ hasn’t even managed to properly handle the fallout from the failures they made when in power.” He mentions that this instability of the DPJ increases the likelihood of holding both Lower and Upper House elections on the same day. 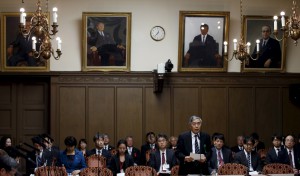 The future of the Japanese economy continues to be a focus of attention. Bank of Japan Governor Haruhiko Kuroda introduced “unprecedented” quantitative and qualitative monetary easing with the goal of increasing inflation by 2%, but three years on that goal has still not been reached. In an article titled “BOJ Governor, when will Japan emerge from deflation?” in the February issue of Bungeishunju, Kuroda says that “in that way, it is still a work in progress.” He explains that the inflation rate changed from negative to positive in the fall of 2013 (based on core CPI not counting raw foods, which are easily influenced by factors such as the weather), and that “In fact, the foundations of commodity prices have significantly improved.” While mentioning that the drop in oil prices is a major obstacle to achieving the inflation goal, Kuroda also says that “Eventually the price of oil will stop dropping and stabilize, or even rebound and increase.... Assuming this happens, it will be possible to meet the goal of 2% in the second half of fiscal year 2016.”

Some involved in financial policy are deeply concerned about the quantitative and qualitative easing, and suggest an exit strategy should be proposed. While using the American Federal Reserve for comparison to indicate the risk of discussing an exit strategy as an option before implementing it, Kuroda explains that “The BOJ has ample policy instruments available, and I see no possibility of there being any difficulty with an exit strategy.” He avoided directly commenting on the delay of the consumption tax increase that the government was supposed to carry out in parallel with the BOJ’s monetary easing, saying “Taxes are a political issue, so of course they are decided by the government and in the Diet. It is certainly not a topic that a central bank should be commenting on.”