・Michael Pillsbury, “Question the secret system of cooperation between the USA and China,” Voice, January issue

・Masaya Oikawa, “Was the USA-China summit the start of the New Cold War?” Gaiko, Volume 34 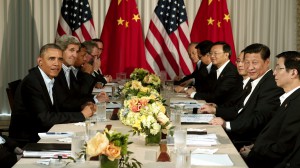 ■  The Unusual Distance in USA-China Relations

The world has entered a period of change. In journalist Yoshiko Sakurai’s article “Be a leader protecting Asia from Chinese imperialism” in the January issue of Seiron, she states that the age of Pax Americana, with the USA ruling the world, is over, and describes the current changes to international society as China attempts to gain dominance as a “seismic shift that will change the world order.” She gives the following analysis of the respective directions the two countries would lead international society: “In the one case, the current world would be maintained, with a respect for international law and a foundation of peace. In the other case, international law would be ignored in favor of expansion through power. The world is at a crossroads where it must choose between these two paths, but the answer is self-evident.” However, Sakurai questions the USA and China, who have seemingly incompatible values, saying “... they are not just avoiding outright conflict, they both seem to be holding back from the other.” Her analysis of this “unusual distance” is that it comes from the two countries’ positions on freedom of navigation in the South China Sea. She proposed the path Japan should take, saying “Overall, it seems unlikely that the USA will return to being a country that willingly exercises powerful leadership.... Therefore, Japan should speak up as a major power in Asia.” (Photo: Reuters/ AFLO)

There are some within the USA who question the opacity of relations between the USA and China. In his article “Question the secret system of cooperation between the USA and China” in the January issue of Voice, Michael Pillsbury, Director of the Hudson Institute Center for Chinese Strategy and consultant at the US Department of Defense, says that since the foundation of Communist China, it has been seeking to supplant the USA as the main global superpower, and it is none other than the USA itself that has been aiding China’s ambition in this “hundred-year marathon.” He explains his argument: “... China did not intentionally deceive the USA. We just chose to believe ‘China will definitely democratize in the future,’ and so made all kinds of promises. But this assumption was inaccurate and based on our own wishful thinking. China has never publicly stated that they intend to democratize.” Pillsbury says that based on this wishful thinking, the USA and China joined forces on twelve secret programs during the Cold War with the USSR. In particular, once the USA was considering pulling out of Vietnam they used China as a deterrent to the USSR. He argues that since the success of these programs formed the basis for future USA-China relations, “There is no way the USA and China would go to war, with such a strong foundation for their relations.... I expect the American government will continue being cooperative with China...the friendly relations between the two countries are set in stone.” Based on his own personal analysis, he gives his opinion that Japan should make “... a foundation supporting democratization, to serve as a focal point for policy on China.”

Mainichi Newspaper Washington bureau chief Masaya Oikawa wrote in his article “Was the USA-China summit the start of the New Cold War?” in Gaiko Volume 34 that “After the freedom of navigation operations, USA-China relations have cooled.” Regarding the future of USA-China relations, Oikawa’s analysis considers both the US Navy “freedom of navigation” operation held in the South China Sea in October 2015 to “‘protest the excessive claims made by countries contrary to international law’ (said by a US Department of Defense official)” and the USA-China summit held one month before that operation. Regarding China’s stance, he explains that “Behind the public front of a ‘new model for major-country relations,’ President Xi is struggling to maintain balance, as while he does not want to escalate the Spratly Islands issue, nationalism directly affects the competition over global hegemony.” As for the USA, he writes “... With the ‘post-Obama’ presidential election coming up in 2016, the debate over policy on China is also heating up. The leading Democratic candidate, former Secretary of State Hillary Clinton, is considered likely to take a hard line on China based on human rights issues, while the businessman Donald Trump has been gaining support as a Republican candidate as he bashes China regarding topics such as the USA-China trade deficit. The leading opinion is that ‘No matter who the next American president is, their Chinese policy will be harsher than the Obama administration’s’ (according to a Japanese government insider).”

■  Failure to Divide Japan and the USA

Some people consider President Obama’s statement that the Senkaku Islands fall under the scope of the U.S.-Japan Treaty of Mutual Cooperation and Security as a turning point in USA-China relations. In his article “Collapse of the maritime expansion strategy” in the January issue of Voice, Sankei Shimbun Chinese correspondent Akio Yaita introduces comments from Chinese foreign policy insiders that President Xi and others who take a hard line on Japan were shocked at this statement. His analysis of the reason is that “The Xi administration has been urging the USA to join them in a united front against Japan over subjects such as historical issues as part of a foreign policy strategy to drive a wedge between Japan and the USA, but this statement showed this strategy has been completely ineffective.” Yaita says that since this statement by Obama, the Xi administration’s criticisms of Japan have shifted from being about the Senkaku Islands to historical perceptions, and from the East China Sea to the South China Sea.