・Akira Ikegami and Masaru Sato, “The nightmare of a world war has begun,” Bungeishunju, January issue 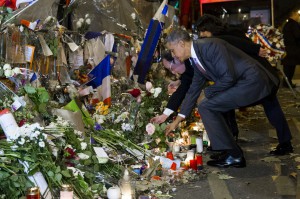 As 2016 begins with reports of Saudi Arabia severing diplomatic ties with Iran, tensions in the Middle East are running high. The enmity between Sunni Muslim majority Saudi Arabia and Shia Muslim majority Iran may have a major impact on conditions in Syria and the global fight against the so called “Islamic State,” and so countries around the world are attempting to decrease tensions. (Photo: AP/AFLO)

In a discussion titled “The nightmare of a world war has begun” between journalist Akira Ikegami and author and former Ministry of Foreign Affairs Chief Analyst Masaru Sato in the January issue of Bungeishunju, the pair discuss IS and the November 2015 terrorist attacks in France from the perspectives of: 1) Why France was targeted, 2) Russia’s actions, 3) The increasing chaos in the Middle East, such as with Iran and Saudi Arabia, 4) The next target for terrorism, and 5) Japan’s influence.

Regarding the terrorist attacks in France, Ikegami explains that a major difference with the 2001 September 11 attacks in USA is that these attacks were by “’home-grown terrorists’ born and raised in France.” He follows by saying “... If the Islamic State says the word, then it can find as many people as it needs inside Europe who are willing to carry out terrorists acts.... There is a domestic supply of terrorists, with no need to import them.”

Both pundits provide their analysis that with the international community’s intentions surrounding the Assad regime and the war with IS being added to the existing enmity between Sunnis and Shiites, countries and forces that previously did not get along have become interconnected in a complicated fashion, increasing the chaos in the Middle East. The two state that the key will be Saudi Arabia, which is facing economic pressure as the price of oil declines. They warn that if the Shiites take advantage of this political instability and go on the offense, then the Sunni IS may join with Saudi Arabia, possibly “... leading to a religious war enveloping the Islam as a whole, which could escalate to a Middle East war and then a world war.”

Noting that it is entirely possible Japan will be the target of a terrorist attack in the future, Ikegami states that “... terrorist attacks occur due to IS being driven into a corner and panicking, so it is necessary to consider them calmly.” In order to prevent terrorism, he points out “... the only option is to provide people who have fallen into the cycle of poverty with proper education, and reduce unemployment as much as possible.” Sato argues that “When a terrorist attack occurs, blustering about ‘fighting terror’ is not important. What is important is the courage to continue your life as if nothing has happened.” He states that the response Japan should take is to continue protecting universal values such as fundamental human rights and market principles, and to “firmly protest” when inhumane attacks are carried out by IS or any other group.

In the January issue of Chuokoron, Masaru Sato and historian and Meiji University Professor Masayuki Yamauchi have a discussion regarding Saudi Arabia, the key to the multiple axes of conflict in the confusion in the Middle East, titled “American, Russian, and European intentions for Syria.” On the topic of different nations’ responses to the Assad regime in Syria, Yamauchi points out that “The terrorist attacks in Paris will force France, as well as the EU and USA, to rethink their policy on Syria.” Sato gives his analysis that “... The Western nations will have difficulty implementing policies that support the Assad regime. Japan must take that into consideration, and act very carefully.” On the subject of how Russia, which supports the Assad regime, has begun making approaches towards Saudi Arabia, which is anti-Assad, Sato states that “... I think that the USA has underestimated the Middle East, especially Saudi Arabia. Russia and Saudi Arabia forming close ties is an unexpected scenario as far as the USA is concerned.” Both Yamauchi and Sato expect the confusion in the Middle East to escalate even further.

Japan-South Korea relations showed significant progress near the end of 2015. In an article titled “From four interests to a G2” in volume 34 of Gaiko, Keio University Associate Professor Junya Nishino analyzes the factors that led to the worsening of Japan-South Korea relations. Nishino suggests that factors includes 1) The behind the scenes negotiation by aides and advisors of both governments are ineffective, leading to public opinion becoming the driving force behind Japan-South Korea relations, 2) Since democratizing, South Korean “progressives” have gained power to oppose “conservatives”, and 3) The perspective of South Korean international politics has changed to a “G2” policy in the belief that now only the USA and China, not Russia or Japan, will control the future of the Korean Peninsula.

Also in volume 34 of Gaiko, Waseda University Professor Yukiko Fukagawa provides an analysis of the stagnation of the South Korean economy. Beginning by stating that “On the surface, this stagnation might be a reaction to hopes for growth having been too high,” the professor explains that “South Korea only has experience with a growth model involving exporting increasingly sophisticated manufactured goods. Therefore, the difficulty of maintaining an export environment may also be aggravating the stagnation.” According to Fukagawa, under the Lee Myung-bak administration South Korean global companies grew due to six factors that acted negatively on Japan: 1) Devaluing the won, 2) Providing energy such as electric power cheaply, 3) Corporate tax breaks for leading exporters, 4) Loose environmental regulations, 5) Relaxed labor regulations, and 6) Conclusion of a free trade agreement. However, under the Park Geun-hye administration “... since Abenomics came into effect, like a game of Othello these six factors have flipped to affect South Korea negatively. The reason the South Korean media tends to be emotional when covering the Abe administration is due to the fact that they strongly feel victimized not just politically, but also economically.”