・Ken Mori, “Do the Abe government’s university reforms have a chance to succeed?” Bungeishunju, November issue 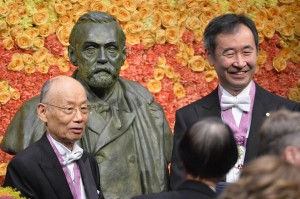 Rensei Baba, a science journalist who published a biography of Omura in the past, provides his analysis of how the scientist acts as a researcher, business operator, educator, and social leader in the article “The four faces of Nobel Prize winner Dr. Satoshi Omura” in the December issue of Chuokoron. Omura jointly won the prize "for their discoveries concerning a novel therapy against infections caused by roundworm parasites," but what he is most well-known for as a researcher is his development of the antibiotic ivermectin in collaboration with Merck & Co., a major pharmaceutical company. When entering into a cooperative agreement with the company, the main goal was to develop veterinary medicine, and by later applying those developments to humans, they were able to save 200,000,000 people from serious infections. Baba praises Omura’s unique idea, as the reason he started with veterinary research was because it is difficult to make progress entering the market for new human antibiotics: “... if they could develop medicine that worked on animals, that would mean they’d already done animal trials, and human applications would seem more viable. This may even be a faster method, following Dr. Omura’s unique instincts as a researcher.”

When the Kitasato Institute, which Omura works at, nearly went bankrupt, his skills as a business operator came to light as he helped with the recovery. He was active in the sale of the government land that the institute was located on, and in dealing with a local medical association protesting construction. “Instead of just acting as a researcher, he acted as both a real-estate agent and political broker.” He is also very active as an educator, with over 31 university professors and over 120 PhDs who are alumni from his lab. He also contributed to society by founding a museum, making donations, and founding the Yamanashi Academy of Sciences in order to encourage science education in his home prefecture. He is a significant presence even outside the field of research.

What led to Omura developing the personality that he did? In “I’m glad I didn’t go to the University of Tokyo” in the December issue of Bungeishunju, Omura himself explains the difficulties he faced: “... one thing that motivated me was the feeling that ‘I don’t want to lose to those guys at the University of Tokyo.’ I graduated from a regional university, studied at a private graduate school, and got a job at a private school. At the University of Tokyo, they get ample research funds from the government. However, we only got about one-twentieth of that amount where I was working. The school would provide some of the students’ tuition as funds for our research, but that wasn’t enough to do any major research.” The reason he still feels “glad he didn’t go to the University of Tokyo” is that “... a researcher like me who acts independently would probably have been kicked out. Since I was faced with the need to find financing, I became determined to make the money myself, and was able to have a lot of success by cooperating with businesses.”

Speaking about higher education today, Omura states “What I am extremely disappointed in is the fact that the word ‘education’ never comes up when discussing regional vitalization. In order to get things moving, it is necessary to start with education.” As an example, he argues the necessity of a system requiring science teachers to keep up to date with developments in science, even after graduating from university and receiving their teacher’s license, in order to teach this knowledge to children. “I would like money to be spent on educating the younger generation now. I personally know of a number of research institutes that cannot manage to use all their Grants-in-Aid for Scientific Research and have money left over. Even if it is just one percent, some of that money should be used to find quality teachers for primary and secondary schools.”

Takaaki Kajita, Director of the University of Tokyo Institute for Cosmic Ray Research, was jointly awarded the Nobel Prize in Physics for his research on neutrinos. This research became possible thanks to the completion of the Kamiokande and Super Kamiokande detectors, and the founder of the research team and first person to successfully observe cosmic neutrinos, Masatoshi Koshiba, received the Nobel Prize in Physics in 2002. In “Memories of drinking with the late Professor Totsuka” in the December issue of Bungeishunju, Kajita reminisces about Yoji Totsuka, a senior member of the research team who contributed greatly to the construction of the Super Kamiokande facility and in handling the accidents that occurred at the facility, and who passed away due to cancer. “If Dr. Totsuka hadn’t done all that work making the Super Kamiokande, my research wouldn’t have been possible. Dr. Totsuka is the one who I always discussed atmospheric neutrinos with. It is extremely unfortunate that I could not receive this Nobel Prize jointly with him.” On the subject of his receiving the prize, Kajita states “... this would not have been possible without the Super Kamiokande running properly. I think this prize shows that the efforts of the more than 100 researchers at the facility have all been recognized.”

Kajita reflects that he has been “extremely blessed” in his life as a researcher, becoming an assistant at Koshiba’s lab after finishing graduate school, and being able to “focus on research I thought was important” without having to worry about job security. He warns about the current state of research, saying “... Japan has a high number of postdoctoral researchers who go from lab to lab, never finding a stable job.... For the sake of scientific progress in Japan, it is necessary to provide some guarantee of job security to researchers.”

Are the educational reforms the Abe government is working on moving in a direction that will solve the problems pointed out by Omura and Kajita? In his article “Do the Abe government’s university reforms have a chance to succeed?” in the November issue of Bungeishunju, journalist Ken Mori states that one of the problems for education reforms, which have been rapidly progressing since the Abe government began, is the abolishment of arts faculties at national universities as mentioned in a notice in June this year by the Minister of Education, Culture, Sports, Science and Technology. This notice requested that departments involved in teacher training or the humanities and social sciences be abolished or converted to fields that better meet society’s needs, and was met with protests by all those involved in universities. Mori interviewed Minister Shimomura, and presented the Minister’s stance: “I never said they should cut back on arts programs.... Although there is some misunderstanding, ‘meeting society’s needs’ was not due to requests from the business or financial circles. So what was it? ... For example, when training people who can contribute to the community, shouldn’t they be trained in an academic area particularly suited for that region? Identifying these kinds of problems forms the root of this reform of national universities...”

What is the true nature of the education issues facing Japan? In a discussion titled “New Education Theory” between author and former Ministry of Foreign Affairs Chief Analyst Masaru Sato and journalist Akira Ikegami in the November issue of Bungeishunju, they thoroughly go over the problems with education in Japan. Both mention that Japanese education lacks in teaching fundamentals, nurturing intellectualism, and recognizing diversity and creativity, and also list the following four issues: 1) It has become standard to only study topics that are on university entrance exams, leading to students having limited ways of thinking; 2) It is becoming difficult to bring in students from around the whole country, leading to loss of diversity in universities; 3) An excessive push for globalization has led to a lack of respect given to the importance of studying in Japanese; and 4) The gap in academic achievement at elementary and junior high school level is getting progressively wider.

■  Will the Japanese Language End?

Ogawa describes his concerns as follows: “... now anyone can easily make their texts public using the internet. This has led to paper formats such as books and magazines becoming an extension of the internet, as mediums for the transmission of information. The very stance of valuing the shape of words or enjoying them as art is vanishing.” Hasegawa references the book The Fall of the Japanese Language in the Age of English by novelist Minae Mizumura, one source of the idea that Japanese language and literature is declining. In this book, Mizumura mentions returning to Japan after a program in the USA where authors gathered from around the world, and she laments the state of Japanese literature: “It is not appropriate to describe it using a poetic adjective like ‘desolate.’ Like an amusement park, everything was small and noisy, making it a relentlessly childish scene.” In response, Ogawa presented his own opinion: “... even with the ample ethnic experience and experience of deep linguistic and ideological beauty that Japan has accumulated, it has now become a noisy amusement park. What I would like people to know is that modern Japanese literature is not just something boring that must be read for the sake of edification, but also texts proving what interesting lives Japanese people can lead.”