・Hideo Tamura, “10% consumption tax will be the end of Abenomics,” Seiron December issue 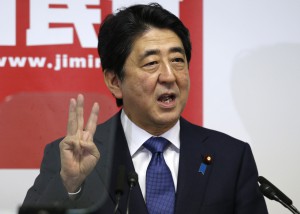 This December marks three years since the start of the Second Abe Cabinet. After being reelected as leader of the Liberal Democratic Party in September, Prime Minister Shinzo Abe announced the second stage of his economic policy, Abenomics. This is a follow-up to the Abenomics policies he implemented at the start of this administration. However, the Japanese economy remains unstable, and debate has continued over the effectiveness of the Abe government’s economic policy. In “My intention with ‘Promoting Dynamic Engagement of All Citizens’” in the December issue of Bungeishunju, Prime Minister Shinzo Abe personally explains the current state of the Japanese economy and his intent with these new policies.

Abe begins by saying that “My first goal after taking power was to end deflation, and the weapons I used for that purpose were the ‘three arrows’ of Abenomics.” Regarding his decision to proceed with this economic policy despite the significant criticism, he states that “In the over twenty years since the collapse of the economic bubble, it is an undeniable fact that no government or policy has been able to overcome deflation. Why is that? Since my resignation as Prime Minister in 2007, I continued thinking on this problem, and concluded that the reason was because everyone feared criticism, and so did not implement any risky, aggressive policies.” He gave his opinion that “Japan’s economy is now only a step away from escaping deflation.”

The biggest obstacle for economic management in the near future is the next consumption tax increase in April 2017. Originally planned for October this year, the hike was delayed. With more unstable factors on the table, such as the future of the Chinese economy, there is an argument to delay it further, but Abe declares “I will not agree with that. Unless something as extreme as the global financial crisis happens, the consumption tax will definitely be increased to 10% in April 2017.” He followed by saying “It is critical to set the Japanese economy on an upward trend before then,” and “The ‘new three arrows’ of the second stage of Abenomics are a means to that end.”

The new three arrows have the slogans “a strong economy that will create hope,” aiming to reach a GDP of ¥600 trillion by 2020; “support for child-rearing that makes dreams,” aiming to reach the desired birth rate of 1.8 by the mid-2020s; and “social security that provides a sense of assurance,” eliminating the need for people to have to quit their jobs to provide care for elderly family members by the early 2020s. Specifically, Abe says that “... in order to stop the trend of declining birth rates and an aging society, the target is to maintain a stable population of 100 million people 50 years in the future.” However, the population will not just be maintained. “Each one of these 100 million people will be engaged. Creating a social system where everyone can use their abilities in the home, community, and workplace” is the goal of “Promoting Dynamic Engagement of All Citizens.”

He also explained that “I do not intend to simply have everyone consider themselves middle class from a financial perspective. Instead, I would like to remove all restrictions and create a society where youths, the elderly, men, women, people with illnesses and disabilities, and people who have failed in the past, can all engage in society. This is what led to the plan for Promoting Dynamic Engagement of All Citizens.”

Heizo Takenaka, a Keio University professor and former Minister of State for Economic and Fiscal Policy in the Junichiro Koizumi Cabinet, gives a positive appraisal of Abenomics and the successes of the Abe government in his article “Deregulation still insufficient,” in the December issue of Bungeishunju. One success he mentions is the agreement reached on the Trans-Pacific Partnership on October 5 this year. Praising the rapid conclusion to negotiations and the significant merits of the plan, he states that “Japan has succeeded in creating a massive economic zone including the USA.... This is the first step to Japan and the USA leading future negotiations on a framework for a Free Trade Area of the Asia Pacific (FTAAP) including China as well.”

Explaining the new three arrows of Abenomics, he says “Although at first they may seem rather different from the old three arrows, when you examine them closely they are declarations of continuing efforts to fulfill goals the original three arrows did not achieve.... The ‘growth strategy arrow’ of the first stage of Abenomics did not sufficiently achieve its goal, and more concrete methods to fulfill this goal form the basis of the new three arrows.” Regarding the goal of reaching a GDP of ¥600 trillion by 2020, Takenaka says that it is not an unrealistic number as an overall goal, pointing out that “... the most important thing is to continue maintaining the course that has been set.”  For methods to achieve this goal, he refers to former Secretary of the Treasury of the United States Lawrence Summers’ strategy to escape long-term global depression with deregulation and active investment in infrastructure. He argues that there is still much Japan can do, such as building casinos.

Keio University Professor Masaru Kaneko is more skeptical of Abenomics, criticizing the new three arrows by saying “Not only is it suspect whether or not these promises can be fulfilled, it is clear that they were made in order to avoid questioning of why the original three arrows ended in failure.”

The nominal GDP of ¥600 trillion is based on a nominal economic growth rate of 3% or more and a real economic growth rate of 2% or more, but Kaneko points out that with the exception of 2010, which was a reaction to the global financial crisis, since the Japanese economic bubble burst “... the nominal growth rate has not exceeded 3%, so this target hardly seems feasible.” Regarding the desired birth rate of 1.8, he states that “it is unclear how it is going to be increased,” and on eliminating the need for people to quit their jobs to take care of elderly family members, he points out that this is inconsistent with the cuts to nursing-care benefits.

The professor also raises doubts about the effects of monetary easing, the star of the original three arrows. “It is obvious that corporate earnings are not trickling down through the hiring of new employees or increased wages. This is causing weak domestic demand, which can be seen in the downward trend in household spending.... Companies are building their internal reserves, and the domestic market is stagnating, so banks are not providing more credit and the eased money is not circulating.” On the topic of the growth strategy, he provides a list of factors with a negative impact on personal spending. These factors include amendments to the Worker Dispatch Law that failed to decrease the number of dispatch workers; a law that leaves home nursing care and other healthcare up to local governments, which suffer from disparities in their fiscal situations; and the trend of further increasing the burden of caring for elderly family members on working-age people, by cutting nursing care benefits.

Kaneko writes “Looking at them now, the original three arrows of Abenomics have ended in total failure. The only indicator that is receiving attention is stock prices, with the Abe government working on raising stock prices in order to create the hope that the economy is improving, even if it is just for show.” He ends with the criticism that “The Abe government spends no time examining why their policies failed, and instead tries to gloss over them by making new promises.”

・Hideo Tamura, “10% consumption tax will be the end of Abenomics,” Seiron December issue

There are a number of people questioning the Abe government’s other economic policies, as well as Abenomics. The biggest focus of concern is the impact of the consumption tax increase in April 2017. In his article “10% consumption tax will be the end of Abenomics” in the December issue of Seiron, Sankei Shimbun Special Reporter Hideo Tamura warns that “A consumption tax increase has a tremendous destructive effect on the economy, as shown by the deflation in 1997 and the way any positive effect from Abenomics was blown away in 2014. And yet politicians, bureaucrats, big business, and the media seem unaware of the fact the country has already made this terrible mistake twice. If the tax increase occurs, as it seems likely to, then Prime Minister Shinzo Abe’s last desperate attempt at recovery, to reach a target of a GDP of ¥600 trillion, will end in failure.” Tamura argues that the reason economic growth has plateaued is that in Japan, with the largest public debt in the world, capital is not used within the country, and instead of corporate tax cuts that just lead to companies increasing their internal reserves, there should be reduced taxes for domestic investment. He also states that consumption taxes should be reduced, not increased.

Is a GDP of ¥600 trillion by 2020 even realistic? Tatsuhiko Yoshizaki, Chief Economist of Sojitz Research Institute, writes in his article “Be wary of GDP, that convenient economic indicator” in the December issue of Chuokoron that “It may be surprisingly simple. There is a trick to it.” That trick is changing standards. The 2005 standards that the Cabinet is currently using will be changed to the 2010 standards at the end of next year. The UN’s national accounts calculations will also be updated to the new 2008 standards. The new standards will include corporate research and development costs in the GDP as “investments.” Previously they were considered “expenses,” and thus not included in GDP under the old standards. Based on examples from other countries, there is an increase of about 3% when this switch to new standards occurs. Yoshizaki writes that “It is foolish to get excited about the fluctuations of this number,” criticizing debates revolving around a superficial number like GDP.