Global Spread of Zen／Abe Administration after Passage of Security Bills 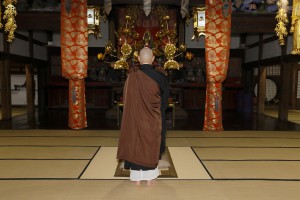 Despite the popularity of Zen around the world, within Japan people have been lamenting the stagnation of traditional Buddhism for some time. What is happening with Buddhism in Japan today? In his article “Japanese Buddhism: wavering between doctrine and practice,” religious scholar and Head of the Tokyo Institute of Technology Center for Liberal Arts Dr. Noriyuki Ueda writes that Japanese Buddhism is currently in the process of being “re-naturalized” by “reselecting” traditions from a new perspective.

Regarding the recent phenomena of young women who like temples and Buddhist statues, known as “temple girls” or “Buddha girls,” and of the popularity of handsome Buddhist monks, Dr. Ueda explains that “... there are many who criticize these trends, saying they have nothing to do with Buddhism. However, they are shaking the foundations of Buddhism, which is only concerned with its obtuse teachings. The young priests who are organizing new events in response to these trends are likely very interested in re-naturalizing Buddhism.” While arguing that there is no simple answer to what people want from Buddhism today and how Buddhism should be taught, he also mentions that “There is no way to deal with the overwhelmingly aging society of Japan with just case workers and caretakers. Religion should be helpful in various ways for seniors, for those in rural areas in particular.”

Dr. Ueda also suggests that the form of Zen brought about through globalization, not bound by the preconceived notions of Japanese people, can provide hints for the role of Buddhism in Japan, and concludes that “Modern religion isn’t just about learning doctrine, it is something that feels right personally, helps deal with suffering, and changes fundamental aspects of daily life.”

Director of the Komazawa University Zen Research Institute Mr. Kiyozumi Ishii, who has also taught about Zen at Stanford University, gives the example of Apple founder Steve Jobs when writing about the spread of Zen overseas, in the article “Steve Jobs, who wanted to train at Eiheiji Temple” in the November issue of Chuokoron.

Mr. Ishii describes an anecdote about how Steve Jobs wanted to train at Eiheiji Temple, the main temple of Soto Buddhism, but was stopped by his teacher of Buddhism in America, Kobun Otogawa. Otogawa thought that Jobs would not be able to handle the training at Eiheiji, considering he was such an individualist he even disliked meditating with others. However, according to Mr. Ishii, Jobs had internalized Zen philosophy, as can be seen from his favorite phrase “The journey is the reward.” “Instead of a doctrine focused on success, where there is no point to doing something if the goal is not reached, the process of performing an action is in itself a success,” which is similar to the teachings of Dogen.

Mr. Ishii also explains that Zen is not about desire for improvement or aiming for the top: “It is important to be aware of where you are and your current self, and properly evaluate these factors as you maintain the desire to move to the next step.” In order to do so, it is necessary to understand not only yourself, but also the feelings of others, which Dogen described as “seeing the self in others.” Mr. Ishii provides the following analysis: “After his failure at NeXT, Jobs experienced firsthand that if something is hard to use it won’t become popular even if it is high-performance, and so learned how to see the self in others. This phrase is in essence about being ‘user-first.’ I am convinced that it is thinking about users like this that led to the success of the iMac and iPhone after he returned to Apple.”

In the article “The ‘enemies of Japan’ Abe’s foreign policy is confronting” in the November issue of Bungeishunju, written by Mr. Kunihiko Miyake, a former diplomat and the research director of Canon Research Institute, he strongly criticizes US President Obama’s non-interventionism as having led to the current chaos, such as in the Middle East, and to the decline of the USA. He also warns that China’s actions are a serious attempt to change the status quo, and points out that “... the biggest threat to Japan is that they are attempting to influence the sea lanes that constitute Japan’s lifeline. A situation in which the freedom of navigation that the USA supports is threatened is a threat that we must fear. Both Japanese and American interests are involved.”

Mr. Miyake also argues that Japan’s response requires the use of net assessment, as used by the USA in determining their strategy to deal with the USSR during the Cold War. Net assessment involves analyzing strategic opposition and competition between nations over the long-term using economics and statistics, as well as a military perspective. He also states that the debate on the Abe administration’s security bills was carried out based on strategic assessment, and that the result was “... the belief that making the Japan-US alliance even stronger” was the only realistic option to confront China. Mr. Miyake also argues that the true nature of the security bills is “How to use the deterrence system to prevent any wars or conflicts from actually happening,” and that “In order to do so, it is necessary to have all the G7 nations understand that China’s maritime expansion of its influence in Asia is just as important as Russia’s expansion of its influence on land in Europe.”

On relations between the Abe administration and China, Mr. Miyake states that China is obviously “failing.” At the beginning of the second Abe administration, China ignored the Abe administration based on the incorrect assumption that it was weak. China attempted to isolate Japan within international society, but “... as a result of ignoring international law not only with the Senkaku Islands, but also in the South China Sea, it is China that became isolated.” On the topic of South Korea’s policy on Japan, he argues that “... unlike in China, where their policy on Japan is related to the foundations of the government, it is a matter of whether the president can survive politically, making it an issue of domestic politics.... South Korea is a buffer between China and Japan. Maintaining poor relations with a country in that position is not in Japan’s national interests. There is no choice but to build good relations with them.”