1. Debates on the 70th Anniversary of the End of World War II

◆“Planting Seeds for a Nuclear-free World—Passing on and Sharing Memories 70 Years after the Atomic Bombing”, Tomihisa Taue, Sekai

◆“I Won’t Give Up. Eradicate the ‘Poison of Peace’”, Shintaro Ishihara, Voice

◆“A New Essay on ‘New Thinking on Japan’ Seeking Tolerance from China, as a Chinese Citizen”, Hiroyuki Sugiyama, Chuokoron 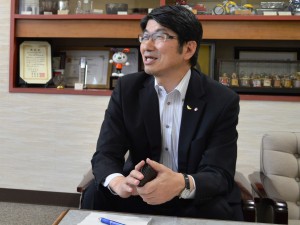 ■The Postwar Period and Nuclear Weapons—Road to Nuclear Abolition

For their August issues, all the magazines put a major focus on the 70th anniversary of the end of World War II. This is also the 70th anniversary of the atomic bombings of Hiroshima and Nagasaki. In an interview with Nagasaki Mayor Tomohisa Taue published in Sekai’s August issue, titled “Planting Seeds for a Nuclear-free World—Passing on and Sharing Memories 70 Years after the Atomic Bombing,” the mayor discusses efforts for nuclear abolition as memories of the atomic bombings continue to fade.

Mr. Taue first commented on how it was “truly regrettable” that no agreement was reached on the final document at the Review Conference of the Parties to the Treaty on the Non-Proliferation of Nuclear Weapons (NPT) held from April to May this year. More so than the fact that the reference to visiting Hiroshima and Nagasaki, the inclusion of which was debated up to the final stage, was not included in the draft final document, he said that the inclusion of a recommendation to interact with people and regions that had experienced bombings in order to directly share their experiences “holds significant meaning...I would like to use it as a jumping-off point for future efforts.”

The mayor discussed his plans to encourage world leaders to visit Hiroshima and Nagasaki leading up to the 2016 Nuclear Security Summit. With the opinion that understanding of nuclear weapons is still limited globally, having President Obama in particular, who understands and is serious about abolishing nuclear weapons, visit Hiroshima and Nagasaki would “be a first step to sharing the reality of the atomic bombings with international society, and working together to abolish nuclear weapons,” and so the mayor plans to try his best to encourage President Obama to visit.

Believing that small-scale diplomacy between municipalities can also influence international popular opinion in a different way than diplomacy between nations, the mayor stated that “Nagasaki and Hiroshima are the two cities that understand best why nuclear weapons are an absolute evil, and possessing or using them should not be an option. That is why we have worked on various proposals and initiatives beyond what is normal for a municipality, and if the national government is going to move in the opposite direction, then we will clearly state our objections, as we always have. That is our duty as a city that has suffered an atomic bombing.” Regarding the dilemma Japan faces being the only country in the world to have been atomic bombed, yet being protected by a nuclear umbrella, Mr. Taue strongly argued for expanding a nuclear-weapon-free-zone (a non-nuclear umbrella) throughout Northeast Asia, as an approach to lead nuclear abolition movements in international society. 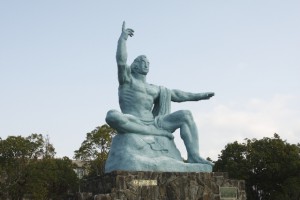 When he gave a speech at the NPT Review Conference, the mayor was asked whether he would like the USA take responsibility for dropping the bomb, to which he replied “As far as I know, most hibakusha (atomic bomb survivors) are mainly concerned with eliminating nuclear weapons, and thinking about what they can do to accomplish this goal.” He also mentioned efforts to have hibakusha pass on their memories to younger people who will take on their roles in speaking about the realities of the bombing, and described a renewed determination to fulfill the duty of a city that has been atomic bombed, saying “I believe that sharing these memories that must not come to pass again is a true deterrent to war.”

An interview with well-known conservative politician and former Tokyo Governor Shintaro Ishihara titled “I Won’t Give Up. Eradicate the ‘Poison of Peace’” ran in the August issue of Voice. In it, he calls the deterrence by America’s nuclear umbrella that forms the basis of the US-Japan security treaty a “mythologized fiction,” and criticizes Japan’s national defense policy since WWII which was based on this “fiction.”

On the subject of the Three Non-nuclear Principles (not possessing, not producing and not permitting the introduction of nuclear weapons) established by Prime Minister Eisaku Sato in 1967, although they were national policy, they were not enforced by law, and Mr. Ishihara gave his analysis that “In light of the core requirements of national defense, what had been expedient at the time later became a major concept restricting Japan.” Regarding the postwar period in Japan, he gave his opinion that “The peace Japan has enjoyed since the war could be considered unprecedented in the world. Over half a century passing without the nation encountering any tense conflict situations and without having to consider the cost of peace is something rare in human history.” He followed by arguing that Japan had to eliminate the “poison of peace” in order to become “a country that can think and act on its own.”

It is dangerous to discuss the postwar period from only a Japanese perspective. In an article titled “A New Essay on ‘New Thinking on Japan’ Seeking Tolerance from China, as a Chinese Citizen” in the August issue of Chuokoron, Yomiuri Shimbun editorial board member Mr. Hiroyuki Sugiyama provides commentary on the new essay on Japan-China relations by famous Chinese essayist and former member of the People’s Daily editorial board Mr. Ma Licheng.

Mr. Ma released “New Thinking on Japan” in 2002 when China was swept up in anti-Japanese fervor, saying “We should build Japan-China relations without being burdened by history, instead evaluating the reality of postwar Japan and building rational relations.” Since then, he has continued speaking out despite criticism within China, and this year on the 70th anniversary of the end of WWII, he has released a new essay for the first time in 13 years.

Mr. Sugiyama explains Mr. Ma’s essay by writing “...The theme is Japan-China reconciliation based on peace, repentance, and tolerance.” According to Mr. Sugiyama, on the subject of the Abe Statement that will be released this summer, Mr. Ma writes that “Some people say that if Prime Minister Abe does not include an apology in his statement on the 70th anniversary of the end of the war, that will mean he lacks sincerity. I understand this opinion. However, we can’t remain stuck forever on the issue of apologizing. I believe we should move forward.” Mr. Sugiyama explains Mr. Ma’s position as “This could be encouraging a reconsideration of China’s policy on Japan of using historical issues as diplomatic leverage, and one-sidedly judging Japan by continuously seeking apologies and repentance...I know of no other case where a Chinese citizen in China has requested forgiveness of other Chinese citizens when it comes to historical issues between Japan and China. Tolerance—this one word, directed at China itself on the 70th anniversary of the end of WWII, could be considered the core of this essay.

Mr. Ma himself had an article in Chuokoron, titled “No Peace in East Asia without Japan-China Reconciliation—Renewed Debate about ’New Thinking on Japan.’” In it, he describes his position as “When dealing with historical relations between Japan and China, what is in many Chinese citizens’ hearts is a war in which Japan invaded China. This history must not be forgotten. However, it is not sufficient to just remember this history. We have to understand two histories. One is a history of war and chaos, the other is a history of peace and cooperation.”

Regarding recent actions by both countries, Mr. Ma gave his evaluation that “What is reassuring is that in recent years, there have been civilian efforts in both China and Japan, based on rationality, tolerance and mutual understanding. They have taken a more prominent role than the national governments and are becoming a fundamental power for reconciliation.” Mentioning the fact that the leaders of the two countries have held talks multiple times this year on the 70th anniversary of the end of the war, based on the principles of peace (elimination of conflict resolution through force), repentance (Japan repenting its role as an aggressor state in the Second World War), and tolerance, he writes that “I am hoping for the gradual realization of reconciliation between the two countries with continual efforts made through both government and civilian routes.”

■The Postwar Period in Japanese Schools

There is also an essay suggesting using works of literature to take another look at the postwar period. Professor Emeritus of Tokyo University Sukehiro Hirakawa uses a single book to look at the postwar period in his essay “The Burmese Harp Again—Commemorating War Dead” in the August issue of Seiron. The Burmese Harp was released in 1948 by novelist and German literature scholar Michio Takeyama, about a soldier in the Japanese army who stayed where he was after the war ends, becoming a priest and burying the countless number of Japanese soldiers’ corpses left behind. With anti-war sentiment becoming mainstream in postwar Japan, Takeyama is said to have given his reason for writing this novel as “...the general public was not interested in praying for the war dead to rest in peace...even though wishing peace for the souls of those who died doing their duty is completely different from determining the cause and responsibility for the war, a shockingly insensitive mood continued,” and so he thought “I must do something to commemorate the dead.”

How to think about past wars; how to protect peace and people’s lives? The 70th anniversary of the end of WWII provides an opportunity to think more deeply about these questions.