When a major disaster occurs, what can the media do to help prepare for the next disaster? The 4th FPCJ symposium, “Improving Disaster Preparedness: Measures for Dissemination of Information for Disaster Risk Reduction”, was held on January 15, 2015. The FPCJ spoke with Ahmad Arif (Kompas, Indonesia), Rachel Graham (Radio New Zealand, New Zealand), and Paul Gorman (The Press, New Zealand) about their feelings on disaster reporting. 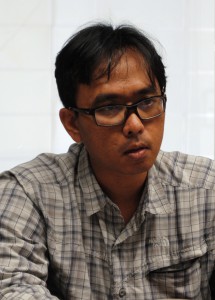 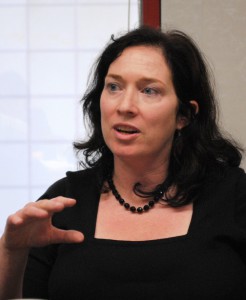 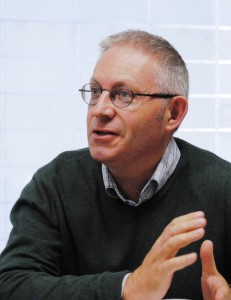 Mr. Arif: I experienced the December 2004 earthquake and tsunami in Sumatra, which ended with around 200,000 people dead or missing. I lost many colleagues, and my best friend. Two days after the earthquake I moved to Aceh, the region which suffered the most damage, and for three years I reported on the pain the people there experienced and their recovery efforts. Even now that I have left Aceh, my focus when reporting is still on Aceh and tsunamis.

At the time, people in Indonesia didn’t know about tsunamis. They had no information on tsunamis at all. Because they weren’t aware that tsunamis came after earthquakes, many people died along the coast. Even a major daily newspaper like Kompas hadn’t run any stories on tsunamis until 2004. Even though there were major tsunamis in the past, the lessons learned were not passed down. I feel it is important as a member of the media to provide people with information about disasters and disaster prevention.

Ms. Graham: I experienced the February 2011 Christchurch earthquake, in which 185 people died, and the September 2010 earthquake the year before. During the more severe February earthquake, I was in our office in central Christchurch. The initial response I had was as a frightened person, not as a reporter, and I was as scared as anyone else. We just grabbed our microphones and gear that we needed for reporting, and evacuated the building.

I thought we had to get a sense of what was going on and tell people about it, but of course I was also concerned about my house and family. We were only a small team of four, so it was difficult to balance work and private life. I didn’t get home until around midnight on the day of the earthquake. I wanted to help support my family, but I couldn’t be with them due to my work.

After the earthquake, that was basically all we reported on. New Zealand has both government and private earthquake insurance, but the system is very complicated and can take a long time, so I often report on people having difficulty rebuilding their home or business. There are also people who have had to abandon homes and move due to liquefaction and other issues, and I also speak with them.

Mr. Gorman: I was in London during the February 2011 earthquake. I woke up in the middle of the night and saw I had 52 texts on my phone, and I thought, 'that's strange, I don't have that many friends'. I went cold when I sat there in bed reading the texts about another massive quake in Christchurch. It was difficult for our reporters in Christchurch to file because the phones were not working, so I sat in London calling people in Wellington and sent some articles in by email, even though I wasn't sure if my family was safe at that stage.

When I returned to Christchurch two days later the situation in the city and our newsroom was just mad. The power was out and our office building had collapsed. One co-worker had been killed and several others were badly injured. Even though the earthquake had also affected us, we still had to write articles every day. I was also working some chief reporting shifts so I had to help manage who was reporting on what and make sure people were taking time off when they needed it.

FPCJ: Has having experienced these disasters changed your view of the role of the media or how you work as a journalist?

Mr. Arif: As I mentioned earlier, the lack of information is one reason so many lives were lost in Aceh. I believe a lot of lives could have been saved if only people knew that tsunamis came after earthquakes. I think that by reporting more on disasters and how to mitigate them, journalists can help contribute to building safer communities.

Also, in Indonesia there is a strong tendency to think “bad news is good news,” and after disasters there will be pictures showing many bodies. Instead of that kind of reporting, I think it is important to report in a way that will apply lessons learned to mitigate the next disaster.

Ms. Graham: After the disaster, the power was out in the city for quite some time. What happened then was that people gathered around cars and listened to the radio and tried to find out what was going on. When I saw that, it reconfirmed the importance of telling listeners what they wanted to know, and what they should know, and it made me feel proud about my work.

At the same time, as a reporter who lives in Christchurch and deals with the earthquake every day, I felt a kind of dissonance with the head office in Wellington. The head office would put pressures on me for good stories with great angles, and try to get me to ask people certain questions. But the head office wasn’t really aware of everything I was doing, and that I spoke to some of these people again and again, for example, people who lost their family members. Sometimes, it was difficult to valance those demands from the head office so I just wouldn’t ask those questions if it didn’t feel right. I insisted that it was important to look at the big picture instead of just chasing after a new story. I thought that when reporting on disasters, it is necessary to feel comfortable with yourself but not just doing what being told.

Mr. Gorman: The Press was 150 years old the year of the February quake. Before the quake our circulation was experiencing a slow decline like many other newspapers but after the quake it improved. Many readers said that they could not believe it when they heard the sound of the newspaper being delivered the morning after the earthquake, as if everything was normal, when really everything was completely far from normal.

In a situation where people couldn't use their computers or phones to access information on the internet, they could still read the newspaper as it was delivered every day. This gave the readers an amazing sense of ownership and I think it also made us remember that we aren't making the newspaper for us, but we are making it for our readers. Personally it gave me a stronger sense of commitment as a journalist and reminded me of the importance of the work we are doing.

FPCJ: This program includes visiting Tohoku, which suffered from the Great East Japan Earthquake nearly four years ago, and Kobe, where the Great Hanshin Earthquake occurred 20 years ago. What would you like to learn from Japan’s experiences?

Mr. Arif: I am concerned that if another disaster occurs in Aceh or other cities, they will suffer damage in the same way. Indonesia is not prepared for disasters. People have returned to the same coast where the tsunami struck and rebuilt their homes in the same spot as before. I think my most important role as a journalist is spreading information about disaster prevention. There are 127 active volcanoes in Indonesia, so there is a high risk of earthquakes and tsunamis. Japan is always learning from past disasters, so I would like to learn about their disaster preparations.

Ms. Graham: It’s been 20 years since the Great Hanshin Earthquake, so there are hardly any signs of the damage left in Kobe, but I am interested in how much the memory of the earthquake is sticking in people’s minds. In Christchurch, where only four years have passed since the earthquake, efforts are being made for stricter earthquake resistance requirements for buildings, but there is already a pushback arguing whether it is really necessary. I would like to learn how the lessons from 20 years ago are being put to use in Japan. I am also interested in finding out how the local media covered these disasters at the time.

Reporter at Kompas since 2003. He is one of Indonesia’s leading disaster reporters. He stayed in Aceh on Sumatra from 2004 to 2007, reporting on the Sumatra earthquake and tsunami. From 2011 to 2012, he travelled around Indonesia as part of a Kompas project on what effects records and tales of past disasters had on the actions people take. He is also the author of several books ("Jurnalisme Bencana, Bencana Jurnalisme").

[Kompas]  Founded in 1965 and with a circulation of 500,000, Kompas is Indonesia’s leading daily newspaper. Widely circulated throughout Indonesia, it is primarily supported by the middle and upper class and academics.

She was inside a radio station in Christchurch when the 2011 Christchurch earthquake occurred. In the four years since then, she has continued to report from the perspective of those affected by the earthquake.

[Radio New Zealand] A public broadcaster that started in 1925, established as its current form in 1995. With its headquarters in Wellington, it also has 10 stations throughout the country, in cities such as Auckland, Hamilton and Christchurch.

Applying his knowledge of geology, he has made multiple reports on the 2011 Christchurch earthquake from a scientific perspective.

[The Press] Daily newspaper founded in 1861. With a circulation of 85,000, it is the most widely circulated newspaper on New Zealand’s South Island.

These three journalists visited Onagawa Town (Miyagi Prefecture) on January 13-14 and Kobe on January 16-17, with the symposium in between on January 15. Please check the report of the program and their articles here.