“The desire to tell other people about things I’ve experienced as quickly as possible, to as many people as possible. That’s where it all comes from.” Curiosity is the prime motivation for Ms. Mari Yamaguchi of the Associated Press to stay on the frontlines of journalism. She has a pleasant attitude hiding an unwavering strength, and we spoke with her about working at a foreign news agency and her goals when reporting.

Never Forget Gratitude, Report from the Viewpoint of the Underdog

–How did you become a journalist for an overseas news agency?

I first became interested in journalism as a profession when I was studying in the USA during high school. There are a lot of people overseas who don’t know much about Japan, and sometimes I would be amazed at the questions I was asked. That made me think that I should study Japanese culture and traditions myself and let foreigners know more about Japan. My father taught social studies, and even as a child there would often be discussions at home over human rights and other issues, so that was probably influential as well.

–What is your work motto?

I try to always consider things from the perspective of the underdog, without pandering to those in a position of power. When dealing with the government or major corporations, I will fight for the right to know, but when interviewing ordinary people, I try to remember to be grateful they are taking the time to talk to me. I also try to remain calm. When reporting, even if there is something I sympathize with, becoming an activist and supporting one side would be crossing a line, so I don’t do it. And if I find something I want to report on, I keep on it and don’t give up halfway.

Quickly and Accurately Showing Japan as It Is

–What is a day at work like for you?

Recently, we’ve been moving away from the style of having shifts and sending things out at specific times. If I have an interview, I’ll do that before going to the office, and I’ll leave partway through the day to go to press conferences, so my life doesn’t really follow a set pattern. I rely on my iPhone calendar. When I go to the office, I usually check my email and the morning papers first. If any urgent news is occurring I will go to work on that, but otherwise I will keep one eye on the news while writing or doing research for feature stories. The only deadline is “as soon as possible.” For daily spot news, the first release will be something short enough that would fit on Twitter, with a second release as soon as possible. Depending on a story, we may file further updates when we get further details or comment. Unless we have trouble confirming facts, this whole process usually takes a couple of hours. There are also special features with photos and videos that are about as long as one third to half of a page of a newspaper. I try to finish writing one every few weeks, but often have to set it aside because breaking news take precedence. I have a few different projects going on in these two formats.

–Is there any part of disseminating information about Japan overseas that you find difficult?

In recent years, overall interest in Japan has been decreasing. When Japan was in a stronger economic position, any mention of Japan received attention, but China has taken that position now. There are a lot of articles about territorial disputes and historical issues between China and Japan, but just writing about Japan is no longer enough to make an article. I have to pick up on an aspect of current Japanese society, and then write an article that communicates that. There are a lot of issues I want to cover, but I have to think of how I will write about them. Deciding on a theme or how to package it is a challenge, and sometimes I will wait and see before covering it or cover a different theme entirely.

–When do you feel glad that you became a journalist?

When I get to be there the moment history is made. When something happens, I get to go there first, talk with people on site and see what happened, and then tell others about it. That feels really fulfilling. Also, I sometimes cover light topics, and I get to meet a lot of people. Whether the person I am interviewing is famous or not, I often learn something about life from them and feel glad that I had the opportunity to meet them.

–Which story made the biggest impression on you?

Obviously the Great East Japan Earthquake made a major impression, but before that there was also 1995. Some of the biggest events in my lifetime all occurred then: the Great Hanshin Earthquake, the Tokyo subway sarin gas attack, and the 50th anniversary of the end of World War II. I’m from the Kansai region myself, so covering the earthquake in Kobe was shocking. After the Great East Japan Earthquake, I mostly spent the next two months holed up in the Nuclear and Industrial Safety Agency and didn’t get to visit the affected areas until months later, but I would like to follow up on how the recovery efforts move forward. Although it seems uncertain whether it will finish during my lifetime, I would like to see the decommissioning of all the nuclear power plants through to the end.

–What is your secret to continued success as a career woman?

I’ve been fairly fearless ever since I was a child, and even now I am just following my desire to be the first to find something and then tell others about it. Even if I don’t get much in-depth knowledge about any one subject because we have to cover many different areas, I want to continue to learn and pick up early signs of various issues. When writing about something, instead of just reading about it at my desk, the more out of my normal experience it is the more I want to experience it myself and write about how it affected me. For stories related to the Fukushima nuclear reactor, in the past three years I was almost rejected twice for being a woman, but after protesting those decisions I was accepted both times. I think Japan has somewhat changed since I began working. It would be an exaggeration to say I was doing it for women the world over, but I will do my best to pave the way for those who want to become journalists.

–Do you have any advice for future journalists?

It sounds better when you say ‘journalist’, but in essence we may be just rubberneckers. You will need basic language skills if you are going to write in English, but even more important is reporting skills: liking research and being willing to stubbornly pursue one subject, or finding small events around the world interesting. Something I found when reporting on nuclear energy after the earthquake was that having some kind of specialty is very useful. You probably won’t write incredibly specialized articles, but I think having that knowledge makes it easier to write good articles. If you have the knowledge you can ask questions about things that you normally wouldn’t notice, which might lead to new questions. Last of all, companies now aren’t going to be looking for people who can only write or take pictures, they will increasingly want to hire people who can do everything themselves. Journalists will have to make the effort to be able to handle a variety of mediums. 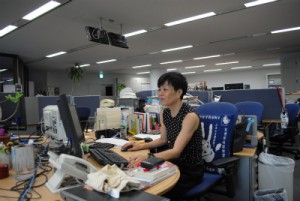 Studied economics at Doshisha University, and journalism at Stanford as a graduate student.

After graduation, she returned to Japan and started at her current position in 1988. Her main focuses are on nuclear energy, politics, foreign affairs, security policy and human rights issues.

Established in 1846. It was made as a not-for-profit news cooperative by five New York newspapers. It is one of the oldest and largest international news agencies in the world. It has approximately 4000 employees worldwide with 280 offices, providing news in English, Spanish and Arabic. The Tokyo bureau has a total of 30 staff, including 6 journalists as well as photography, television and technical staff.