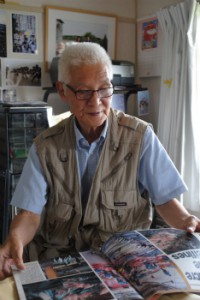 Mr. Kaku Kurita has spent the last 50 years sending news photos overseas of what happened in Japan. The representative of French news photo agency Gamma-Rapho says that the secret to having worked so long is being a rubbernecker. We spoke with him about how he became a photojournalist and what he considers important when taking news photos.

-What are some important points when taking news photos?

Mr. Bernard Krisher, former Newsweek Tokyo bureau chief who had a one-on-one interview with Emperor Hirohito in 1975, and the late Mr. Ray Falk, former ABC News Tokyo bureau chief, are the ones who taught me to always shoot pictures with "Japan" in the frame. Looking back, that is the root of my photography now. Of course, sometimes this "Japan" can be dolphin hunting or other elements that don’t help develop a positive image.

Another significant implication of news photos is that they are a tool to record history. News photos of today will be valuable as records 50 years later. Even now, I still get checks for royalties of pictures I took 20, 30 years ago.

-Could you tell us a little more about photographing “Japan”?

~A Rubbernecker, Not a News Photographer~

-What led you to start as a news photographer?

First of all, I wouldn't call myself a “news photographer.” I’m a “rubbernecker.” I once had the child of an acquaintance of mine say to me “You live off the misfortune of others, don’t you?” This job lets you see things up close that most people don’t. That tricks you into thinking you’re special, but you are not.

I used to be a commercial photographer. In commercial photography, you shoot things based on illustrations and rough sketches. All you have to do is focus and click - kind of boring. In one of those boring jobs, I met a true professional. Top fashion model Ms. Miki Irie, wife of Mr. Seiji Ozawa. She did a truly professional job. I could use any of the photos I shot during the brief photo session. I felt like I had been smacked in the head, that if you are going to do a job, this is how it should be done.

-In the 50 years you have taken news photos, which photo left the strongest impression?

There is something that I still remember, or to be more accurate never forget, and still regret. After the Japan Airlines crash in 1985, I was on site quickly and able to photograph three of the four survivors. I was so focused on delivering these photos to the office that I forget to take photos of the fatal crash scene. Predictably, the head office asked where the rest of the pictures were. Since then, I’ve always tried to remain calm to the end, no matter what the situation is.

-What is your secret to staying on the job for so long?

Being a rubbernecker. Never forgetting to be courteous. You cover the news and aren’t covered as news. 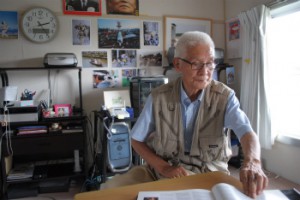 Born in Tokyo in 1939. After working as French film actor Alain Delon’s personal photographer and other show business jobs, he did commercial photography for companies including Dentsu and JWT before switching to the news industry in the 1960s. One of his photographs was used for the cover of Time magazine. He started at his current position in 1974.

The Gamma news photo agency was started by photographers in France in 1966. Several mergers followed, with the current name in use since 2010. They have a stock of over 200 million photos covering the 20th century.  Pictures taken by Mr. Kurita can be seen by searching “Kaku Kurita” from the company website.