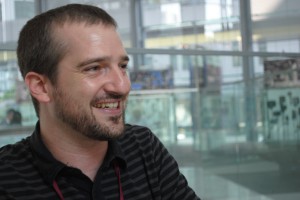 “I could talk forever about what I like about Japan,” said a smiling Mr. Andres Sanchez-Braun, a Japan enthusiast who mastered the use of chopsticks at the age of six. After the Great East Japan Earthquake, he not only reported on Tohoku but also volunteered there. We spoke to him about the pros and cons of working in Japan and his future plans.

The Joy of Telling the World about Japan

I’ve never really thought about it before. When I was young, I liked telling people about things, and even made a school newspaper. At some point, I began to feel like I was pretty good at that kind of thing. I think I am very lucky now to be able to tell people in far-off Spain and Latin America about what is happening in Japan. The interest of my readers is also increasing bit by bit, and in particular economic relations are growing stronger between Japan and Latin America every year. I hope that my work in Japan will help those relations to develop.

I grew up in Madrid, but I had a lot of contact with Japanese culture. I liked Japanese movies, books, characters, manga and martial arts, and took judo lessons. I also loved Japanese food; I was an uncommon kid that liked to eat raw fish. This is due to my father working at a company that did business with Japanese companies, and often using Japanese restaurants in Madrid for business lunches. My parents have never been to Japan, but I learned how to use chopsticks from my father. I still like Japanese food so much that my parents and I will often eat it on my birthday.

–What led to you coming to Japan?

I majored in journalism in university, and studied all types of audiovisual mass media. After graduating, I worked in newspaper and television before joining El País, the largest newspaper publisher in Spain. I worked there for almost six years and met the woman who would become my wife while in Japan for work. My wife is half Japanese and half Spanish. Meeting her led to El País providing me an opportunity to work in Japan, which I had been interested in since childhood. When I suggested to the company that I stay in Japan and report from here, they gladly accepted. After two years working in Japan, I joined Agencia EFE, and this will be my fourth year there.

–What difficulties have you encountered while covering Japan?

I knew the language barrier meant it wouldn’t be easy to work in Japan. I’m sure everyone from outside Asia has difficulty with it. When the information sent to me is in Japanese, I can’t always fully understand the jargon. There is a Japanese staff member in our office, but I can’t rely on her all the time.  Each country also has its own way of doing things. When I first came to Japan, the Japanese kisha club system was hard to understand.

Where do I begin? The crime rate in Japan is lower than in other countries and it is safe to walk anywhere. I am very thankful for this, both personally and for my family. I also like the food and the plentiful public transportation, Japan is convenient in every possible way. From a work perspective, once you get used to it, it is a country that is very easy to live in. I like this country, and so being able to tell people what is happening in Japan makes me very happy.

–What was the most memorable story you covered?

Everything related to the Great East Japan Earthquake made a strong impression on me. For better or worse, I had temporarily gone back to Spain ten days before the earthquake, so I did not experience it, but I have continued to report on the recovery effort. Every step on the path to recovery was very moving to me. After the earthquake, when I first went to Miyagi, I reported on a volunteer group helping in Wakabayashi-ku in Sendai, and experienced the warmth people are capable of. I also went to Miyagi and Fukushima multiple times for reasons other than work. Around five months after the earthquake, I got some time off. I asked the volunteer group I had met whether my wife and I could volunteer with them, and they welcomed us gladly. We helped till fields and pick up small debris, but considering how right after the earthquake there were so many piles of debris that they blocked the roads, the worst had already been dealt with when we went to volunteer. Even then, as a resident of Japan, I wanted to become involved myself.

I’ve been here for five years, but I still haven’t been to Shikoku or Hokkaido. I’m interested in seeing what kind of places they are. Madrid’s summers are hot, but dry, so the humidity of Japan is an issue for me. I want to go to Hokkaido right now, just to escape this humidity. Themes I would like to look at in the near future include the New Growth Strategy and the North Korean abductions. Reader interest in Japanese politics was not usually all that high in the past, but that has changed noticeably with the Abe government.

–Are there any themes you would like to see covered in future FPCJ press tours?

If there was a press tour focusing on the National Strategic Special Zone in Okinawa, I think it might help paint a clearer picture of it as an international center for tourism. Press tours to the Zones for bolstering agriculture in Hyogo and Niigata would also be interesting. Recently, the International Union for Conservation of Nature (IUCN) has classified the Japanese eel as endangered, which should have a major impact on local economies. It will hurt both producers and consumers. In response, one university has already started researching farming eels all the way from eggs to maturity. If this succeeds, it could help contribute to solving the problem. Day-long tours on themes like these might be interesting.

-What advice do you have for new correspondents in Japan?

In the West, whether reporters want them or not, governments and companies constantly send out press releases. They will often call directly as well, and a lot of information comes in, but Japan is different. New correspondents will probably be off-put by the differences with how they worked before. In Japan, there is a tendency to keep quiet instead of taking action and potentially making a mistake. Therefore, announcements for anything take a long time. Also, Japanese media are given higher priority. Considering these factors, I think it is important to develop a lot of patience. If you keep this in mind, it is possible to learn a lot while in Japan, and develop as a journalist. 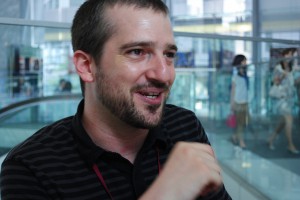 Worked as an assistant at a TV station before joining El País, the largest newspaper publisher in Spain. Came to Japan in 2009, and started at current position in 2011.

Established in 1939. Based in Madrid, it is the 4th largest news agency in the world and sends over 3 million pieces of news (including video and photos) yearly to over 2000 media outlets throughout the world. 40% of international news reported in Latin America originates from EFE. EFE releases news in six languages: Spanish, Portuguese, English, Arabic, Catalan and Galician. It has around 3000 employees in 120 countries around the world. The Tokyo bureau has four members, including a Japanese researcher.