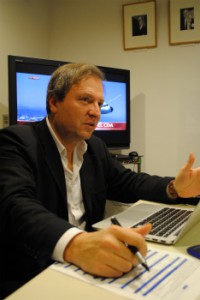 “Being able to handle a variety of multimedia tasks will become more and more important. It will be difficult to make a living as just a print journalist,” according to Mr. Stefano Carrer, East Asia Correspondent for Il Sole 24 Ore, an Italian financial newspaper. We spoke with him about his impressions of Japan and his work here.

–What is your impression of Japan?

The first time I came to Japan was in 1991, as a tourist. Japan has changed a lot since then. Seeing how the urban landscape of Tokyo has changed since then, from Odaiba to Omotesando, it is hard to believe the Lost 10 or 20 Years that people talk about really occurred.

–Why did you decide to move to Japan as an East Asia correspondent?

Japan has an appealing culture, with a blend of modernity and tradition. Honestly, the fact that there was less competition for this posting than for London or New York was also a factor. If I had stayed at the head office in Milan, I likely would not have reported on topics besides finance. But as a correspondent, I get to cover a broad range of topics by myself, including politics, economics, culture, and science and technology. I also cover South Korea, Taiwan and Southeast Asia in addition to Japan. This is one of the benefits of being an East Asia correspondent.

–Does the language barrier cause any difficulties for your reporting?

Of course, there are issues. Normally, I interview people in English, and I have an interpreter accompany me when necessary. In the last few years, even some CEOs of Japanese companies have become available for interviews in English. But at least an intermediate knowledge of Japanese is required for our work. In an emergency, I managed to read Prime Minister Abe’s book Utsukushii Kuni E (Towards a Beautiful Country) in Japanese by myself for reference for an article I was writing. I studied Japanese for three years in Milan, and also did a homestay for one month in Kanazawa, Ishikawa. Unfortunately, my skills have not really improved in the past year. My shameful excuse is that I am too busy to reach the next stage.

–What is your favorite part of working as a journalist?

I like the fact that there is no clear separation between work and free time. For instance, I watched Japanese national team soccer matches, interviewed their manager Mr. Zaccheroni, and visited the Tomioka Silk Mill which was registered as a World Heritage site. What would just be leisure activities for other people is also work for me. At the same time, I will occasionally also write articles about areas I have visited while on vacation. Of course, I also like to be at the center of the media world sometimes. It happened, for example, when reported about the 2011 tsunami, going to Tohoku for weeks right after the event. Tough times.

–Can you describe what your workday entails?

To start, in the morning I send two articles to the head office that only online subscribers can read. Later, I send articles that are published for free on the homepage and radio news, and then around noon I film and edit news videos. In the afternoon and evening, I write articles for the print paper

–Do you have any advice for journalists who are covering Japan for the first time?

The media environment is changing. The number of newspaper subscribers is declining, and an economic slump means advertising revenue is decreasing as well. So there is a limit to the funds available for foreign correspondents. Last year, I was asked to make news videos in addition to writing articles. I had no experience making videos, but now I handle everything from filming to editing. In the past year alone I made 150 videos. Being able to handle a variety of multimedia tasks will become more and more important. It will be difficult to make a living as just a print journalist.

A daily financial newspaper founded in 1865, listed at the Milan Stock Exchange and  owned by Confindustria, the Italian employers’ federation. Second only to the Financial Times in circulation numbers for European financial papers. Maintains a wide variety of online content, including radio and video content (Stream24). A section called Pianeta-Giappone has an archive of videos shot and edited by Mr. Stefano Carrer. 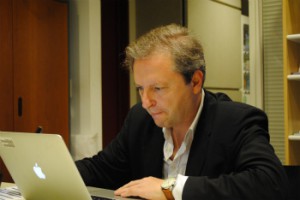 Born in Milan, Italy in September, 1961. Received a Degree in Law from the University of Milan and a Master in Journalism from the Institute for Journalism (Ifg) of Milan. Joined Il Sole 24 Ore in 1993. After covering international trade and international finance, worked at overseas bureaus in New York, London and Tokyo (2006-2009). Started at current position in April, 2013