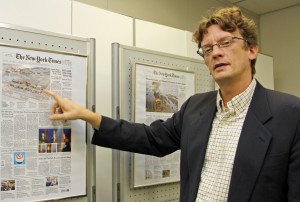 Interviewed Mr. Martin Fackler, Tokyo Bureau Chief of the New York Times, who has always provided readers with new viewpoints, by exposing social contradictions through close and critical analysis and by listening carefully to “voiceless people,” on how he sees Japan where he has spent most of his life as a journalist from 17 years ago.

―What is your most impressive experience in Japan as a journalist?

The earthquake in Tohoku and the accident at the Fukushima No. 1 Nuclear Power Plant would be the single biggest, and the most memorable event that I have covered in Japan. That was such a huge tragedy. It was an event that showed both the strength and weaknesses of Japan. People could remain organized, civilized, and helpful to each other in the communities, despite what happened. They had the natural patience and inner strength. In contrast, the biggest weakness would probably be a lazy bureaucracy and big corporates. Forty years ago, the government-industry cooperation was very successful in Japan, but the system has grown internally rotten, as there has not been enough competition, challenge, or check, and everything is basically established and controlled by interests. They still protect companies’ special interests, not ordinary people. It is interesting, though, that the people in Japan elected the LDP government that is very pro-nuclear power even though they remain very suspicious of nuclear power and the regulation of it. It seems not clear where Japan wants to go.

~ My job is to tell stories of voiceless people ~

―When do you feel pleasure in being a journalist?

The most rewarding moment would be the time when I tell stories of voiceless people. Recently, I had a page one story about people in Namie, Fukushima, who can probably never go back, but they do not get compensation, and are stuck in limbo. I do my job to tell the stories of victims, not to be a spokesman for the TEPCO.

―Why did you become a journalist?

Since I like to do research and discover things, I had a choice of being a journalist or an academic professor. Then journalism appeals to me, because you can do it in real time, and in the real world. If I were a professor, I would live on campus, removed from the outside. In journalism, you try to put together something for the first time, figuring out how to frame it. That is a real challenge, but interesting.

―How did you grow an interest toward Asia?

I wanted to get away from the US and see the world. When I was a freshman, Dartmouth College offered Russian and Chinese, besides European languages. It was the time of the Cold War, and China was just opening up; the era of Deng Xiaoping. It seemed there were a lot more possibilities in China. However, about the time when I was getting advanced in Chinese through studying in Taiwan, the massacre of Tiananmen happened in 1989. Suddenly, China became very hard to visit. At the same time, Japan enjoyed the bubble and Prime Minister Nakasone created lots of scholarships for foreign people. I was also interested in the Japanese economic model. How did Japan become the first developed country in Asia and then become an empire? After the war, how did it become the first developed, industrialized Asian nation? I focused on the history of development at the University of Tokyo. My start in journalism was as a financial correspondent at the Bloomberg office in Tokyo. Since then, I have worked mostly in Japan. Now, in the aging society where people are naturally conservative, can Japan come up with a new, more dynamic system and re-discover its ambition and energy again? That is a big question I give an eye to.

Learn local language and that area. ~

―What are the advantages of working in Japan?

Tokyo is a nice and easy place to live. Like Europe, it is clean and well-organized. In China, you may experience challenges because the air, water, and food are polluted, but it is a real relief when you come to Japan. People are usually very civilized, polite, and friendly. They tend to trust other people and have sincerity, while people in other countries are wary, doubtful, and cautious. It seems like a very earnest society.

―Have you experienced any difficulties while you work as a journalist?

People do not talk very openly, and they are reluctant to stand out. Also, the system works differently on the surface and it can be hard for a newcomer to figure out what is going on. So it takes time and efforts to find out how it works: there is a big learning curve with Japan. Few people seem to want to invest the time to do it. For me this is good, though, because such makes my experience and skills rare.

―Do you have any advice for foreign journalists who are about to start working in Japan?

Learn the language, first of all. Early in the era, more companies flew journalists all over the world, from one country to the next, but that model is shrinking. There are fewer and fewer old-style correspondents, and more and more area specialists who know local language and that area. Another skill is to analyze, make judgments, and write.

~ Japan is a democracy, but has a very weak sense of civil society. ~

―How do you see problems that Japan faces?

Even though Japan is a democracy, it has a very weak sense of civil society. People do not feel public responsibility to get out their opinion; they do not really analyze and criticize themselves. This may be partly because there is not a strong political divide in the society --- a strong right and left. Several decades ago, there probably were more analysis, because there was a strong communist party movement and a socialist party. That is, you had two different viewpoints, and that might let more debates arise. Now, the left has really died out. The DPJ tried to do some of that, debureaucratization, but they really did not push the country. Still, that was the time, the Hatoyama and Kan governments, there was more self-reflection in Japan. Now that it goes back to the LDP, a kind of one-party system, there is not a lot of debate, no alternatives. The problem is that people do not talk about social problems, what kind of system they have, and how it can change.

―Japanese people are said to be quiet and even closed to outside. How can they change?

It is an inward-looking country. The way to improve would be to create scholarships for people to study abroad, and change the employment system with a lot more flexibility. A rigid employment system makes young people hesitate to do different things, as it is very risky to go abroad if they might not get a job when they come back. Two years of service in Africa after graduating from high school or university, like the Japan Overseas Cooperation Volunteers, or going to graduate schools overseas; these should be seen as positive to support that person to get a better job. I would suggest a change to have a different assessment of work that recognizes experiences and strength more.

―What do you seek from FPCJ?

The Press Briefing by Prof. Takatoshi Ito, Graduate School of Economics, The University of Tokyo, was very useful. There are some people who are very hard to get 1 on 1 interviews; some do not want to and others are too busy. So, if the FPCJ can get them to come and talk to the point of the policy, its objective, Japan’s initiative, and what is really going on, that would be really helpful, whether it is on Japan and Asia, the Fukushima power plant, or the “third arrow” of Abenomics.

Born in Iowa, the United States, in December 1966. Obtained BA in Asian Studies at Dartmouth College, MA in Journalism at the University of Illinois, and MA in history at the University of California, Berkeley. Also studied abroad at Tunghai University (Taiwan), Keio University (Japan), and the University of Tokyo (Japan). In 1996, started his career as a journalist in the Tokyo Bureau of Bloomberg. Moved to the Associated Press and worked in Tokyo, New York, Beijing, and Shanghai. After working at the Tokyo Office of the Wall Street Journal, joined the New York Times in 2005. 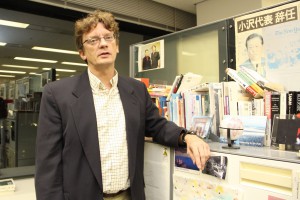 First published in 1851. The leading daily paper company in the United States, standing on Fairness, Integrity, and Truth. Issues on Monday to Friday and Sunday. The total average circulation for Sunday is about 2.4 million, of which about 1.2 million is in print, April to September 2013. The number of its newsroom staff is more than 1100, including 75 full-time correspondents in 30 foreign bureaus. Five staff work in the Tokyo Bureau and they cover mainly Japan, but also different areas depending on the writers.