The National Museum of Emerging Science and Innovation (Miraikan) is a science museum open to all and designed to link people directly with the new wisdom of the 21st century. It was opened in Odaiba, Tokyo, in July 2001. In addition to interactive exhibitions which visitors can touch and enjoy themselves, Miraikan holds science workshops, special exhibitions, talk sessions and other events. Visitors can experience cutting-edge science and technology as the new wisdom that opens up the next era, by having dialogues with interpreters (exhibit commentators) and volunteers. Through such activities, Miraikan aims to share cutting-edge science and technology with the whole society as part of human culture.

In this press tour, there will be a tour of Miraikan (with English interpretation), briefings on Miraikan, its activities, and its special exhibitions for the year 2007, and meetings with Dr. Mohri (Miraikan’s Executive Director), Mr. Nakashima (its Deputy Director), and other staff of Miraikan. In the tour of Miraikan, you will observe a demonstration of ASIMO (humanoid robot) and will receive introductions to environment-related exhibitions which will reopen after its renovation, advanced medical- and space-related exhibitions, and other areas which have become popular topics of conversation. This tour enables you to experience cutting-edge science and technology.

【Activities of Miraikan】
Miraikan is engaged in the following three activities as a base for linking people to cutting-edge science and technology.

1. Communicating Science - releasing information on cutting-edge science and technology, and using new methods
Miraikan communicates cutting-edge science and technology as the “new wisdom” through various methods and dimensions around the world. At the same time, it uses original new methods of releasing such information (it communicates worldwide through exhibitions, events, websites, and other methods). 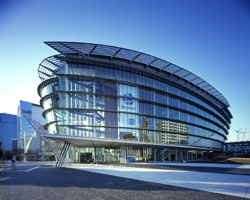 1. Tour of Miraikan
>> Link
You will observe a demonstration of ASIMO (humanoid robot), and will be introduced to exhibitions related to medicine, space and advanced science and technology, in addition to the earth environment area. This tour will be guided by Miraikan’s regular interpreters who explain the exhibitions to its visitors. In addition, Dr. Mohri, Miraikan’s Executive Director and an astronaut, plans to guide you in its space-related area.

【The Earth Environment】
A new exhibition called “Think about ecology” will open at the “Earth Environment and Frontiers” area on the 5th floor. What are the rules for humans to live on the Earth? Through interactive video displays, you will find the true nature of environmental problems and be able to think of the future. 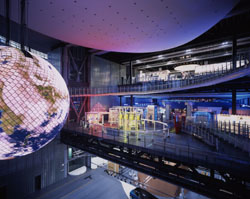 【Medicine】
As we gain a better understanding of the causes of disease, the state of medicine is changing markedly with advances in biomedical materials, computers, and other technologies. At the medicine corner, you will be introduced to advanced medicine with 3 dimensions of “examining”, “treating”, and “sending opinions”, under the theme of “pursuing medicine together”.
【Space】
The laboratory building for space science, Miraikan’s original building for living in space, and others, are exhibited under the theme of the challenges faced by human beings, as life on the earth, who wish to go to space with science and technology.

【Robots】
Japan is leading the world in robot development. At this exhibition, you will be introduced to Japan’s humanoid robots and rescue robots. You can get to understand robot technology by watching and even operating real exhibits. 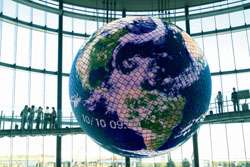 2. Briefing on the “Concept of Miraikan” by Mr. Nakashima, Miraikan’s Deputy Director>> Link
Mr. Nakashima and other staff in charge will tell you about the concept and activities of Miraikan, the Year of 2007 ASPAC Annual Assembly, and other special exhibitions for the year 2007.

*ASPAC Annual Assembly: ASPAC (Asia Pacific Network of Science and Technology Centres) was established to develop science and education while facilitating smooth communication and cooperation between organizations and science centers in the Asian-Pacific region which specialize in the development and understanding of science and technology. Miraikan’s Executive Director Mamoru Mohri was appointed as the Vice President of ASPAC for the year 2007 - 2008. Taking this opportunity, Miraikan will host the ASPAC Annual Assembly for the year of 2007 June 19th - 22nd 2007, celebrating ASPAC’s 10th anniversary. 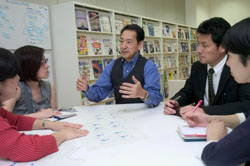 3. Reception hosted by Miraikan
This is an opportunity to meet Executive Director Mohri, Deputy Director Nakashima, and other staff of Miraikan.

afternoon (audio guidance system in English can be provided). MEGASTAR-II cosmos is a planetarium which projects 5 million fixed stars, the most in the world. 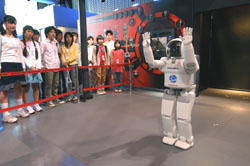 4. Participants: Limited to the first 30 applications on a first-come first-served basis. 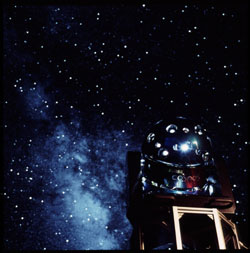 6. Remarks:
(1) When you photograph or film at the tour sites, please follow the instructions of the officials on duty.
(2) FPC and Miraikan will not be liable for any inconvenience, trouble or accident that might occur in the course of the tour.