~ J-PARC, the World’s Most Advanced High Intensity Proton Accelerator, and JT-60, a Satellite Facility of ITER ~ 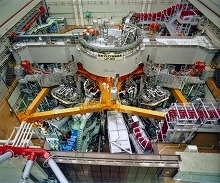 In December this year, Japan Atomic Energy Agency will inaugurate J-PARC, Japan Proton Accelerator Research Complex, the world’s most advanced research facility, in Tokai Village. Knowing the nano world is expected to help researchers to develop new medicines for intractable diseases such as cancer and AIDS, and materials for fuel cells, findings possibly worth a Nobel Prize.

In adjacent Naka City, JAEA has another world’s most advanced research center, the Naka Fusion Institute, where JT-60, a fusion plasma research facility, is in operation. It has been decided to construct the International Thermonuclear Experimental Reactor (ITER) in Cadarache in southern France, and JT-60 will be used as a satellite facility of ITER. For that purpose, JT-60 will undergo a large scale renovation from September this year for seven years. 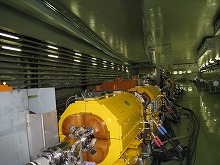 Half a century has already passed since Japan’s first atomic energy facility started operation in Tokai Village, Ibaraki Prefecture. In December this year, the village will celebrate the inauguration of J-PARC, Japan Proton Accelerator Research Complex, the world’s most advanced research facility. J-PARC, now under construction by JAEA and the High Energy Accelerator Research Organization, will accelerate protons to almost the speed of light(seven and a half times round the earth in one second) and have them collide against the atomic nuclei of targets of metal and other materials. The nuclei are destroyed, artificially producingneutrons and mesons, enabling the structures of various materials to be observed, which cannot be seen by other conventional methods. Knowing the nano world is expected to help researchers to develop new medicines for intractable diseases such as cancer and AIDS, and materials for fuel cells, findings possibly worth a Nobel Prize.

In adjacent Naka City, JAEA has another world’s most advanced research center, the Naka Fusion Institute, where JT-60, a fusion plasma research facility, is in operation. It has been decided to construct the International Thermonuclear Experimental Reactor (ITER) in Cadarache in southern France, and JT-60 will be used as a satellite facility of ITER, which will start operation from around 2017. For that purpose, JT-60 will undergo a large scale renovation, including the introduction of a superconductor,from September this year for seven years. JT-60 has been playing a leading role in international nuclear fusion research, achieving the world’s highest iron temperature of 520 million K., and it will now take a new step forward to realize a dream of nuclear fusion power generation.

The tour will visit JAEA’s Tokai Research and Development Center, cover the major facilities of J-PARC, which is only months away from starting operation, and learn about future technology to be developed by J-PARC. You will also visit Naka Fusion Institute, tour JT-60 facilities and understand Japan’s role in the ITER project.

*As the tour will enter nuclear related facilities, each participant will be required to submit an application to JAEA. (We will send the application form to participants when confirmed.) Please also note that journalists from India, Pakistan, Israel, Iran, North Korea, and some others, mostly non-NPT (Nuclear Non-Proliferation Treaty) countries, will not be able to join the tour, because of problems in the application procedures. 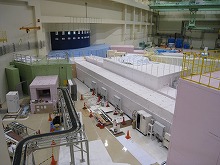 J-PARC, to be opened in December this year, has two functions: accelerators to produce high intensity proton beams and experimental facilities using secondary produced particles. The accelerator complex consists of three accelerators: a 330-meter linear accelerator, a 350-meter rapid cycle synchrotron (3 GeV) and a 1.6-kilometer synchrotron (50 GeV). Construction of these facilities has already been completed and test operations to accelerate protons were successfully carried out by the end of May.

Protons, accelerated to almost the speed of light, will collide against the atomic nuclei of a target of metal and other materials, producing secondary particles. Using the particles will make it possible to observe the micro world, which cannot be seen even by X-ray technology.

Construction is almost finished at the Materials and Life Science Experimental Facility. Using neutrons and muons for their research, revolutionary inventions are expected in such research fields as life science (new medicines), nano technology, and energy and environmental science (development of metal hydrides essential for fuel cells). Japanese research institutions and Ibaraki Prefecture will establish their own research facilities, and other research proposals have come from Taiwanand Korea, making it an internationally open research hub, centered on Asia.

They are also constructing the Hadron Experimental Facility and the Neutrino Experimental Facility, which will clarify how space came into being, by using secondary particles and neutrinos. The Neutrino Experimental Facility will be able to send large amounts of neutrinos to Super Kamiokande in Hida City, Gifu Prefecture, located 295 km away from Tokai Village. Hopes are rising for outstanding achievements in neutrino research, which has come to be known since Dr. Masatoshi Koshiba’s winning of the Nobel Prize in Physics in 2002. As the experimental facility is internationally valuable, it is expected to attract 400 researchers from 12 countries (300 from overseas). 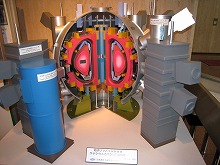 The International Thermonuclear Experimental Reactor (ITER) project has started, aiming at constructing the first nuclear fusion experimental plant. The project is joined by Japan, the EU, Russia, the United States, Republic of Korea, China, and India. After a fierce competition between Japan and the EU, it was decided in June 2005 to construct ITER in Cadarache in southern France instead of Rokkasho Village in Aomori Prefecture. A Joint Implementation Agreement was signed in November 2006 by the ITER Parties, and came into effect in October 2007, marking the official start of the international project. JAEA is designated as Japan’s domestic agency, in charge of producing machines and equipment for which Japan is responsible under the ITER Agreement, and providing human resources to ITER.

Under the grand design “making the sun on the earth,” JT-60, a fusion plasma research facility, began operation in 1985 at JAEA’s Naka Fusion Institute. It has played an active role as a leader of the world’s nuclear fusion research, and achieved 520 million degrees centigrade of high temperature plasma in 1996, which was registered in the Guinness World Records as the highest temperature ever reached by human endeavor. Their research activities for over 20 years will be temporarily suspended as of the end of August this year for large scale renovation, upgrading it into a superconducting machine. After seven years of renovation, the facility will be used for supportive experiments for ITER in cooperation with the EU, ultimately aiming at constructing a fusion power generator in the future.

Can we really generate electrical power by nuclear fusion, the same phenomenon that happens in the sun? What will be Japan’s contribution?

3. Expenses: 5,000 yen per person including transportation (JR train between Ueno and Tokai) and lunch

*FPCJ will inform the participants of payment methods, cancellation fee etc. later on.

6. Remarks:
(1) Please follow the instructions of the staff on duty.