Application status: Waiting as of January 31 as the number of applicants has exceeded the limit of 10.
-Living harmorniously with More Siniors, Fewer Children-
Toyama, the epitome of rapidly Greying Japan

‘The aging population with a falling birthrate’ is not a problem only for Japan. This is a major and unavoidable issue in this twenty-first century for both central and local governments in such countries as Korea and Taiwan, that have a lower birthrate than that of Japan, and other Asian and Western developed countries. In particular, the Japanese population is aging at an unprecedented rate: currently the proportion of its population over 65 stands at 19%, the highest in the world, and is predicted to reach nearly 30% by 2025.

Situated at the center of Hoshu, the main island of Japan, Toyama Prefecture is aging much more rapidly than any other prefecture in Japan, the first to come along the way to a society with more seniors and fewer children. Meanwhile, Toyama accounts for about 1% of the country’s population, area, and size of industry, in other words, “a miniature of Japan”. This means that what happens in Toyama is virtually certain to happen elsewhere in Japan.

In April 2004, Toyama City, the capital of the prefecture, got together with six neighbor towns and villages that include aged and underpopulated areas. The City’s proportion of elderly surveyed in 2004 is at 20.8% and is expected to reach 27.7% in ten years’ time. Mayor Masashi Mori, known as an energetic leader, has already built his own vision of positive life in the aging society and is trying hard to deliver.

In this press tour, Mayor Mori will speak about his main concept of city planning, “a small city for old people to live comfortably and happily”, and introduces some specific measures including “Power Rehabilitation”. The tour also features Toyama-style day care service as well as unique and innovative local manufacturers that produce electric mini cars for “silver” drivers, easy-to-open doors which are designated as a universal design and a security system for old people living alone. 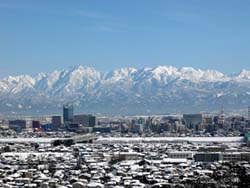 Born in Toyama in 1952, Mr. Mori was first elected as an Assembly Member for Toyama Prefecture in 1995, re-elected in 1999, then elected as Mayor of Toyama in 2002. In April 2004, New Toyama City was born in a big merger of neighboring seven municipalities: Toyama City, Onosawa Town, Yatsuo Town, Fuchu Town, Yamada Village, and Hosoiri Village. Then Mr. Mori was elected as the first Mayor of this large city with an area of 1241.85 square meters and a population of 420,000. 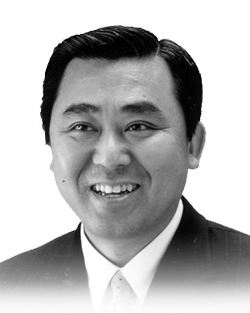 Since he took office, he has been working hard on such issues as the municipal merger, public transportation, elderly care, and inviting more foreign visitors to the city. He also has acquired a good command of the Korean language. The motive came to him at a historical moment, the collapse of the Berlin Wall that happened when he was working as a judicial scrivener. As a Japanese citizen, he wanted to be able to help people in the neighboring countries as if some drastic change were to occur in Korean Peninsula. He started learning Korean on his own and mastered it. In addition, he is currently learning Italian.

“The old city was continuing to spread in terms of size and functions, and consequently it stagnated. So the new city should shift to a policy of creating a core area with intensive functions, that will enable people, goods, and money to move easily. In order to do so, it is essential for the city to build up such public transportation systems like railway and bus services”, the Mayor gives of his vision of the newly born city. 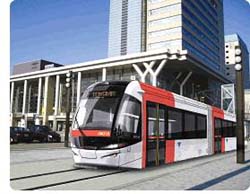 As a leading project for re-energizing the city’s economy, Toyama Light Rail, a tram system built by the local government and run by the private sector, is scheduled to start operation at the end of April this year. This is the first attempt in Japan to revitalize the JR Toyama-ko Line, which is in the red, as a next generation tram system. Mayor Mori himself is in charge of its operation as the President of the third sector company, Toyama Light Rail.

Nicknamed “Portram”, the tram cars are easy-access, designed for the elderly and the handicapped. The rail tracks are stable and quiet as they are laid with a resin, a popular method in Europe. The rails were also imported from Luxembourg. 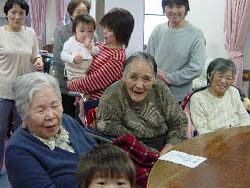 Established in 1993, as the first NPO in Toyama (designated in 1999), by three former nurses of Toyama Red Cross Hospital, this nursing home has an unusual policy as it takes care of sick children, the elderly, the disabled and everyone else all together under one roof.

Kayoko Soman, President, says, “Let people of different kinds and generations communicate with each other and get them to feel as if they were living in their own homes”. She tirelessly receives a large number of visitors from not only inside but also outside Japan including Latin America at this “Toyama style day-care house” which has paved the way for people who want a flexible and “normal” system of nursing care.

For example, in Shiga, Tokushima, and Nagano Prefecture, each local government currently subsidizes the same sort of day care houses. In 2004 Toyama City was designated “a special area to promote Toyama Style Day Service” by the central government.

Training with a machine exclusively developed for the elderly, improves the function of knees and elbows and stimulates weak muscles and nerves. Power Rehabilitation provides exercise for old people who at present need helpers in their daily life and makes them physically active and strong. It makes the elderly less dependent on caretakers and gives them confidence and fulfillment.

The tour will visit an elderly-nursing house named Alpen Heights and see exercising – and maybe join in.

When a senior living alone presses the emergency call button, or a sensor fitted in the home automatically catches something wrong with her/him, an emergency center responds and gets in touch with family members, helpers, and the emergency services asking them to send someone to check on the elderly person.

This sort of service system largely depends on the “Jinkan Sensor” invented by Tateyama Kagaku Group, that monitors a person’s activities for 24 hours at home and is able to recognize such actions as getting up, sleeping, and going out. When it senses something wrong with its owner it automatically calls the emergency center.

The company is known as a maker of text news service installed in taxi and operates a factory in Hungary.

A unique carmaker in Toyama helping old and handicapped people with originality and compassion. It is, in fact, a small factory with only 10 employees but it began a collaboration with Hokuriku Electric Power Corporation in 1996 and successfully developed a one-man electric car. Then in spring 2002 it started selling an electric mini-car named “Friendly-Eco” that enables wheelchair-bound people to get in and out and drive without assistance.

Its brand-new model, to be on sale in Japan in four months, is a stylish ecology-friendly (one-man electric) car, developed in a joint project with a group of professors of Toyama University Art and Culture Faculty. This will be the first case of a car jointly developed by a company and a university being put on the market.

Centrea Airport, opened prior to the 2005 World Exposition in Aichi, introduced “Oletto Door” to its 270 toilet units. It is a folding door anyone can easily open/close in a limited space. As it hangs from the top of the door with no guide rail necessary on the floor, not only wheelchair-bound people but also children and old people can use it easily. This general user-friendly door is designated as a universal design and is being used more and more. It can be made in such materials as wood, glass, and metal and can be adapted to as a stylish automatic door.

The company receives orders from nursing homes for the elderly, hospitals, and households all over the country and is currently in touch with Boeing regarding the introduction of the Oletto Door on its new passenger plane.

T&T Takamatsu Tategu is originally a door carpenter shop founded in 1930. Olette Door was born when the current President Toshiro Takamatsu, who wished to create a elderly-and-disabled-friendly door, met a Hamamatsu-based maker of NTT’s telephone boxes for wheelchair-bound people.

A list of Toyama’s attractions for tourists includes the North Alps and Mt. Tateyama, a series of 3000-meter-high mountains, mountain climbing, ski, golf, and hot springs. The city is trying to invite more visitors from the neighboring countries. Tour participants will have a chance to visit one of the ski resorts at the foot of Mt. Tateyama which currently attracts skiers from South Korea. 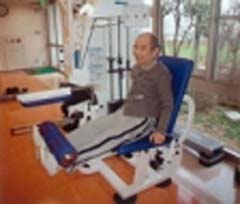 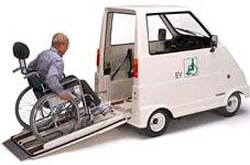 3. Expenses: 10,000 yen per person including transportation, meals and accommodation
*FPC will inform the participants of payment methods, cancellation fee etc. later on. 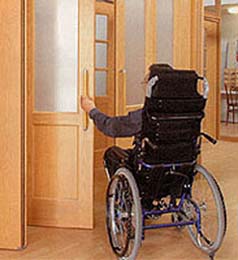 6. Remarks:
(1) There are some restrictions on photographing and filming at the tour sites. Please follow the instructions of the officials on duty.
(2) Toyama City, Toyama TV and FPC will not be liable for any inconvenience, trouble or accident that might occur in the course of the tour.