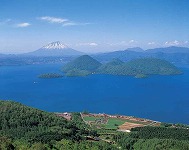 Only a little over one month to the G8 Hokkaido Toyako Summit. One of the main themes of the Summit is environment and climate change, and Japan’s leadership as the host of the G8 summit is being put to the test.

Hokkaido has abundant natural scenery, and the indigenous Ainu tradition, which regards nature as sacred, remains here. Toyako is a town where people live with an active volcano that erupts every thirty years. People in Hokkaido also use the long and harsh winter as a resource – strong wind for wind-power generation, and snow for air conditioning.

It is a little over one month to the G8 Hokkaido Toyako Summit. One of the main themes of the Summit is environment and climate change. This year, the obligation to reduce greenhouse gases based on the Kyoto Protocol starts, and it is an important year in which Japan’s leadership as the host of the G8 summit is being put to the test.

Hokkaido, the venue of this year’s Summit, has abundant natural scenery, and the indigenous Ainu tradition, which regards nature as sacred, remains here. Being close to nature sometimes can be hard – Toyako is a town where people live with an active volcano that erupts every thirty years. The residents cope with potential disaster by predicting the eruption and evacuating quickly. At the same time, they are able to enjoy rich soil with hot springs and volcanic ash. They also use the long and harsh winter as a resource – strong wind for wind-power generation, and snow for air conditioning.

The press tour will visit Summit related facilities when preparations are in their last stage. This also is a great opportunity to come in close contact with the wisdom of the residents’ way of living with nature, and to see some attempts at realizing a low-carbon way of living made possible by cutting-edge environmental technology.

*This press tour is hosted by the Japanese Ministry of Foreign Affairs, and organized and operated by the Foreign Press Center. Four journalists who are here on invitation from overseas will also participate in this tour.

1. Venue of the G8 Summit and theInternational Media Center (IMC) 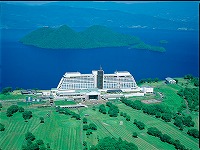 The Windsor Toya Resort & Spa is the main venue of the G8 Summit. Situated on a hill-top of the 625 meter Mt. Pomoroi, the hotel is surrounded by breathtaking scenery with Lake Toya right beneath. The location and the luxurious atmosphere are highly valued both domestically and abroad. It will be an ideal venue to discuss global environmental issues.

Rusutsu Resort, where the IMC is set up, has been working with due consideration of the environment – another ideal venue for this year’s summit, which puts emphasis on environment issues. It is said that a maximum of 4,000 people will be using the IMC. Snow is kept underneath the press center building to send cool air into the working space. Water from melted snow will be used to water the plants and in the lavatories. The buildings are designed to use natural ventilation through the roof and natural lighting.

This press tour will visit the Windsor Toya Resort & Spa, and will be staying overnight at the Rusutsu Resort, where the IMC will be set up.

2. Toyako, where people live with volcanoes 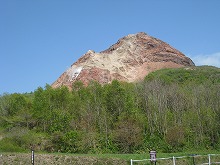 Mt. Usu is located on the southern part of the Toya caldera and is an active volcano which erupts every thirty years. Not even one casualty was reported when there was an eruption in 2000. This was made possible by the thorough system which predicts eruption and theresidents’ mind-set on disaster prevention. Volcanoes are not simply a threat; they also provide various kinds of benefits such as hot springs, rich earth which is good for agriculture, and the purification of Lake Toya. Coming to terms with the severe natural environment, at the same time the people benefit from living with it.

In February 2008, Toyako Onsen introduced the nation’s first heat pump system, which collects heat from discharged hot spring water and then utilizes it to warm up the spa water. By introducing this new system, a boiler using heavy oil was completely abolished, with the prospect of reducing the use of 300 kilolitres of crude oil and cutting the emission of 1,340 tons of carbon dioxide. This environment friendly project has started in this small town where the G8 Summit will be held.

This press tour will visit the Toyako Visitor Center to get the big picture of Lake Toya and the awesome power of nature, see the active volcanoes Showashinzan and Mt. Usu, and cover the new project of the heat pump system at the Toyako Onsen.

For the indigenous Ainu, mountains, rivers, and the ocean are one huge storehouse that keeps an inexhaustible supply of food. Nature is sacred and indispensable to their existence. Such a culture has been inherited in the town of Shiraoi, which is endeavoring to create a recycling-based society. 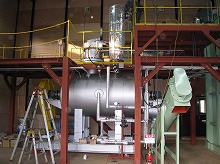 Shiraoi is now trying to utilize the town’s waste as biomass fuel. The nation’s first plant to produce biomass fuel was jointly developed with Hokkaido University, and is now under construction to start operation in April 2009. Operated at elevated pressure and temperature, it will not produce dioxin. From January 2008, a trial plant started operating, and when it starts full operation, 92% of the town’s waste material is expected to be recycled in this way. The fuel produced by the plant will be provided to the new waste fuel boiler which is currently under construction within the Nippon Paper Group’s Shiraoi mill. This will be a big step towards a recycle-based society. An industrial waste transport company also established in Shiraoi last month a bio-diesel fuel (BDF) factory. It is expected to monthly produce 90,000 liters of BDF, which will be used for vehicles owned by the town.

After being briefed on Shiraoi’s efforts towards a recycling-based society, the tour will visit the biomass fuel trial plant and BDF factory. 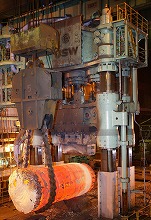 The Muroran Plant of Japan Steel Works, which celebrated its centenary in 2007, is one of the major companies in Muroran, a steel city. It was Japan’s largest civilian ordnance manufacturer, and following the end of World War II, its technological know-how was swiftly converted to peace industries.

Currently it enjoys the reputation of having the world’s leading techniques in manufacturing huge steel items with a high-pressure press. Its worldwide share in major components of nuclear reactors, such as pressure containers, is about 80%. Because of the rising price of crude oil, countries around the world are considering constructing new nuclear power plants, and in order to reduce the emission of green house gases, nuclear powerhouse is starting to garner attention, as is JSW. These days, the company is putting emphasis on energy and environment-related sectors, and is actively involved inmanufacturing components for wind power generators. 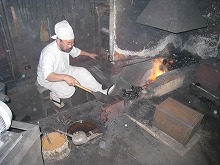 Another “hidden product” of which JSW boasts is its Japanese swords. A smithy was built within the compound in 1918. In order to preserve the Japanese swordsmith techniques, even today, swords are made in this smithy.

After a briefing on the outline of the plant, participants will tour relevant shops, a wind power generator, and the Japanese sword smithy.

*It is strictly prohibited to photograph or film inside shops producing components of nuclear reactors. 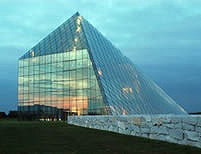 Planned as the core park under the Circular Greenbelt Concept, which was aimed at surrounding the urban areas of Sapporo with eight parks and green belts. In 1988, the world renowned sculptorIsamu Noguchi visited Sapporo for the first time, and was impressed by the City’s intention of turning the vacant lot of a landfill site into a park, and designed the park. Noguchi passed away suddenly in the same year, but the construction of the park was continued based on his layout, and the park opened in July 2005. The symbol of this park, which is considered to be one complete sculpture, is the glass pyramid “HIDAMARI”. During summer, air conditioning is generated by the snow kept in storage. This cooling system utilizing natural snow will be also used at the IMC in Rusutsu Resort. During winter, heat accumulates in the top of the pyramid, which is used for heating. Ideas for reducing the environmental burden are seen here and there in the park.

You will have a chance to talk with Sapporo Deputy Mayor Takayo Kato about the city’s environmental policy, and enjoy strolling through the park.

6. Integrated Exhibition of the Environment in celebration of the Hokkaido Toyako Summit

The exhibition will be held during June 19 – 21 as a summit-related event. On the largest scale in terms of an exhibition on environment, it will be a great opportunity to demonstrate Japan’s leading edge environmental technology to the world. More than 300 companies from inside and outside Hokkaido related to such fields as “environment education, eco-life” and “new energy, energy conservation” will participate. This will actually be the showcase leading to the realization of the low carbon society.

Participants of this tour will have opportunities to try out the latest technology, such as test driving the fuel cell vehicles which are planned to be used at the G8 Summit.

*FPCJ will inform the participants of payment methods, cancellation fee etc. later on.

6. Remarks:
(1) There are some restrictions on photographing and filming at the tour sites. Please follow the instructions of the staff on duty.