~ How to Survive International Struggle for Fishery Resources ~ 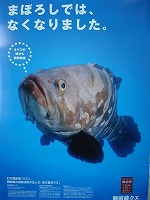 International consumption of seafood is booming as people have become more conscious about healthy food, and competition for fishery resources has intensified. As the fish catch increases, there is a mounting concern over excessive fishing, and an FAO survey shows that about three quarters of world marine stocks are fully exploited or overexploited.

This press tour to Shizuoka will give you some perspective on the future of the Japanese fishery industry, by covering various measures for securing fish stocks and revitalizing the industry in the prefecture, a leading fishing prefecture, which boasts the largest amount of landing for frozen tuna and skipjack, and consumption of tuna. 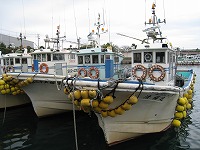 International consumption of seafood is booming as people have become more conscious about healthy food in the United States, Europe, China, and other countries. Competition for fishery resources has intensified and international fish prices are soaring. As the fish catch increases, there is a mounting concern over excessive fishing, and an FAO survey shows that about three quarters of world marine stocks are fully exploited or overexploited.

Surging fuel costs for fishing boats are also dealing a serious blow to the whole industry. In August this year, the Japanese Tuna Fisheries Cooperative Association went into a two-year-long suspension of part of its offshore longline fishing, because of low catches and fuel cost hikes. The cost of aquafarming feed is also on the rise, caused by expanding consumption of fish meal in China, and high prices of flour, soy, and other grains, and weighing heavily on aquaculture operation.

In this heavy going, various measures for securing fish stocks and revitalizing the industry are being taken in Shizuoka Prefecture, a leading fishing prefecture, which boasts the largest amount of landing for frozen tuna and skipjack, and consumption of tuna. Join our press tour to Shizuoka to gain some perspective on the future of the Japanese fishery industry.

*This press tour will be co-hosted by the Foreign Press Center Japan and Shizuoka Prefecture.

― The First Fully Farm-Raised Kue, Bringing back a “Ghost” Fish ― 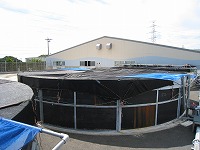 The kue, or grouper, is a large fish 1.5 meters in length and weighing 50 kg. Omaezaki City in Shizuoka caught 7 tons of kue in 1990, but the volume came down to 400 - 500 kg in recent years; the stocks were close to non-existent and it was called a ghost fish. However, the fish hascome back. In 2005 Shizuoka Prefectural Thermal Effluent Utilization Research Center succeeded for the first time in a complete cycle of farming kue, raising fry hatched from a fish grown in the center. Last year they supplied 2,000 fish as Omaezaki Kue, a local brand, to hotels and restaurants through the local tourism office, and this year they are planning to double the number.

The key to the success was the usage of thermal effluent (warm sea water) from the adjacent Hamaoka Nuclear Power Station. Kue do not feed when the water temperature goes down to 15 degrees centigrade or lower. Using the thermal effluent, the center keeps its water temperature at 20 degrees or warmer, enabling the fish to grow quickly. With some other technical development, the survival ratio of hatched fry this year grew 5 times from the previous year. They have released 13,000 fry into the sea at three places in Shizuoka, hoping to catch wild kue in the near future. 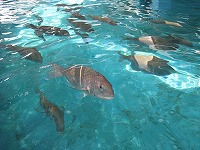 The center also raises and releases other fish like red sea bream and Japanese flounder. The catches of those fish have been on the rise in recent years and about 25 to 30% of the fish caught have been found to be those raised in the center. Their efforts to restore marine resources have proved effective and close to achieving a “producing, raising, and catching” fishery. Local fishing cooperatives are also making a high-level effort by establishing a pool system in which a certain percentage of their profit is contributed for a fund to stock the sea with fish.

The press tour will cover their high-level efforts in aquaculture, and have a chance to taste kue which will be provided to foreign reporters in advance of the official start of the season.

Sakura-ebi is a small shrimp which is harvested only in Suruga Bay. Despite its small size, only 4 to 5 cm, the shrimp is one of the major marine products of Shizuoka, with an annual catch of 2,000 tons and sales of 4.4 billion yen, nearly 30% of the total sales of the prefecture’s coastal fishery (15.9 billion yen). 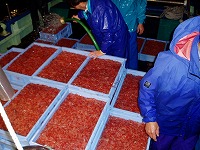 In 1964 to 65, they have suffered a plummeting fish catch and excessive competition over fishing facilities, which prompted them to consider some measures for preventing overexploitation and conserving the fish stock. In 1977 a unique pool system was established, under which only 120 vessels from three regions (Oigawa, Yui, Kanbara) were allowed to fish the shrimp. Two vessels make one unit and 60 units in total go fishing. There aretwo sakura-ebi seasons: spring (from late March to early June) and autumn (late October to late December), and actual fishing days per year are about 40. During the fishing seasons,a fishing committee, composed of representatives from fishery cooperative associations of the three regions, discusses every day and decides on whether to go fishing or not, the fishing time, and the target catch.Sales of all vessels are totaled, and about the half of the net profit goes to the vessel owners and the other half to the fishermen. Each portion is equally divided among vessel owners and fishermen, no matter how much sakura-ebi each unit catches. They think that income equality is the only way to stop the endless race for fish.

The press tour will visit Oigawa Fishery Cooperative Association and talk with people from the fishing community about their resource management system, right after the start of their autumn season (October 30).

*You will not be able to cover the evening landing and early morning auction of the shrimp.

The Yaizu Marine Fisheries High School, with eighty-six years’ tradition, is known for dynamic single-rod fishing on a training vessel, and for its history as the producer of the first canned tuna in the world. The school has been fostering people to shoulder the local industry of Yaizu, “the city of fishery,” claiming the 2nd largest fish catch in Japan. 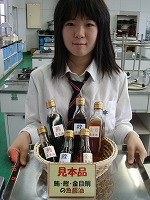 The school was the only fisheries school in Japan designated for the “Aspire to be a Specialist! (Super Specialized Upper Secondary Schools)” program by the Education Ministry from 2006 through 2008, and has been bringing up specialists through education on product development and marketing practices, utilizing local marine resources. For example, the school has developedsmoked mackerel from the Spotted Mackerel, which was not considered suitable for eating, and alsoa fish sauce using the bones, internal organs, and other unused parts of locally consumed mackerel and tuna, originally used for animal feed. These original products were developed under the theme of effective utilization of fish resources. 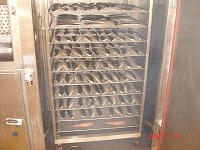 Another interesting project in the school is a student-run mock venture company named “Fish Paradise Uokoku (Fish Country).” The company sells these originally developed products with agood reputation at an outlet store in a local shopping street every November. The school has been also working on fish farming for the recovery of fishery resources through raising and releasing red sea bream and flounder into the sea as well as conducting marine resource surveys.

As the winds blowing against the fishing industry get stronger, the school has a growing expectation from the local community to produce talented human resources who can contribute to revitalize the fishing city.

After a briefing on the school programs to foster specialists, you will have a chance to talk with students to hear their thoughts on the future of Japanese fisheries.

3. Expenses: 5,000 yen per person including transportation (JR train between Tokyo and Yaizu) and lunch
*FPCJ will inform the participants of payment methods, cancellation fee etc. later on.

6. Remarks:
(1) Please follow the instructions of the staff on duty for photographing and filming.

(2) Shizuoka Prefecture and FPCJ will not be liable for any inconvenience, trouble or accident that might occur in the course of the tour.