3. Only six more months! Preparations for Rugby World Cup 2019 in Oita, one of the host cities

In ancient texts such as the Kojiki, Oita was referred to as Toyo no Kuni (Land of Plenty), and with its temperate climate, plentiful sunlight, and geography including mountain ranges and long coasts the area produces a bounty of food from both land and sea. This natural bounty and an enterprising attitude towards incorporating foreign cultures created a fertile culture and history carried on to this day, with inventive and unique initiatives being carried out.

This tour will visit Oita Prefecture, where Rugby World Cup 2019 matches will be held in October of this year, and see the preparations for welcoming rugby spectators, the local Oita food these visitors will be able to enjoy, and unique cardboard craft figures from Oita gaining attention worldwide. 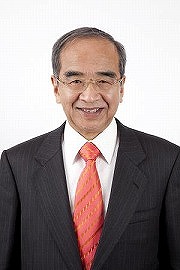 Located in eastern Kyushu and facing the Bungo Channel, into which the warm waters of the Kuroshio Current flow, Oita not only has an abundance of seafood, it also has plentiful mountains and hot springs, gently welcoming visitors with its bountiful nature. Oita Prefecture is the only local government in Kyushu to have hosted matches for the 2002 FIFA World Cup jointly held in Japan and South Korea, and five matches will be held in Oita City for Rugby World Cup 2019. World-class teams such as New Zealand, Australia, and Wales will also stay in Beppu, in their official camps. With some of the top athletes in the world gathering in Oita, it will be a once in a lifetime opportunity to experience the thrills of sport. Preparations are underway throughout Oita to ensure the teams that train and compete there will think to themselves, “Oita was great.”

◆Governor Hirose will speak about his feelings as the governor of one of the prefectures hosting RWC2019, and his hopes for how Oita may benefit from hosting.

Of the 12 venues throughout Japan where RWC2019 matches will be held, five matches will be held in Oita Bank Dome at Oita Sports Park, including New Zealand’s champion team against Canada and two quarterfinal matches. Oita Bank Dome is a stadium with a modern design, including one of the world’s largest retractable roofs, which is also translucent and lets in natural light even when the roof is closed due to rain. To prepare for the RWC, stadium renovations are being carried out at a rapid pace, and this summer the stadium will introduce a hybrid grass field, combining natural grass with artificial grass for improved resilience. Only half a year remains until the stadium is filled with competing players and 40,000 cheering fans, and preparations are underway taking full advantage of the experience of having hosted the 2002 FIFA World Cup.

◆Oita Sports Park staff will explain the renovations and preparations being carried out ahead of the RWC, and expectations for hosting the RWC. There will also be an opportunity to film areas such as the seating and locker rooms, and speak with official RWC2019 volunteers. 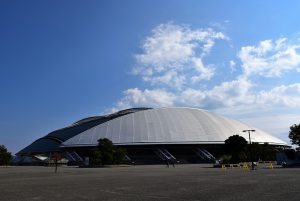 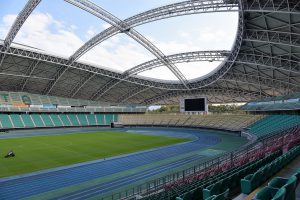 More and more tourists from the US, Europe, and Australia are visiting Beppu every year, with a total of approximately 17,000 visiting annually. However, due to a lack of sufficient information being provided to visitors to this area, many tourists with tattoos would be disappointed when entering hot springs facilities and being told they were not allowed to use them. With RWC2019, it is expected that more foreign tourists than ever will visit Beppu, the world’s greatest hot springs city, including from countries such as New Zealand and Fiji with a cultural tradition of tattoos. In a first for Japan, Beppu has created an English site for “100 Tattoo-allowed Hot Springs” including public baths, private baths, hand baths and foot baths, in an effort to expand the number of hot springs which will accept customers with tattoos and enable more tourists to enjoy the hot springs.

◆The tour will hear from Mr. Takeshi Sasaki of B-biz Link, which made the map under commission from Beppu City, about the map of hot springs which foreign tourists with tattoos can enter and the current state of acceptance. The tour will also visit a facility which allows people with tattoos, and hear from management there. 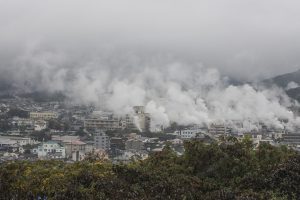 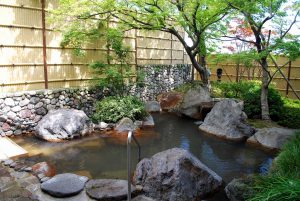 Until the end of the feudal period, Oita was composed of 15 areas made up of 8 domains and 7 territories. The name of this restaurant comes from these numbers in Italian (8=otto, 7=sette). Almost all the ingredients used here are made in Oita, with Head Chef Tetsuya Kakehashi designing a menu around the seafood and produce sent to the restaurant from producers around Oita. The restaurant also has dishes made using the traditional Jigoku-mushi (hell steaming) method, using steam from hot springs.

◆The tour will have the chance to experience local Oita cuisine using traditional way of cooking. 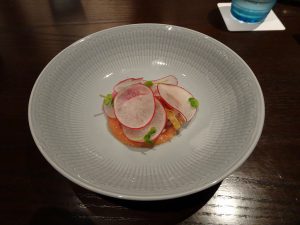 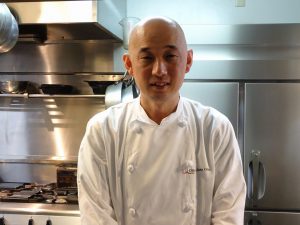 Tsukumi, in the south of Oita, is home to Hotojima, an island known for deep-sea fishing of tuna since the Meiji period (1868­–1912), and had one of Japan’s largest tuna catches. Through the ebb and flow of the Bungo Channel in the bay of Tsukumi, the warm waters of the Pacific Ocean are mixed with the cold, nutrient-rich waters of the Seto Inland Sea. In this harsh environment caused by the temperature difference of the waters and rapid current, tuna and yellowtail are farmed.

There are 175 bluefin tuna farms in Japan, and 10 are in Oita, with only Nagasaki and Kagoshima having more (as of December 1, 2016). When farming tuna, one of the main issues to deal with is usually the development of feed mixtures, but the Yoko Tuna Bungo tuna farmed by Hyoshoku was the first farmed bluefin tuna in the world to be grown from fry to adulthood using only an original feed mixture, which was developed along with another company. Instead of the standard 10m×10m×10m enclosures standard in Japan, Hyoshoku uses their own Hiro-Biro Ikesu enclosures which are a massive 60m×40m×25m for farming. Also, by raising the tuna for a year or more longer than other producers, Hyoshoku produces bluefin tuna with both high-quality, firm red flesh and luxurious, fatty otoro tuna belly.

◆The tour will visit Hyoshoku, where Mr. Yosuke Yamasaki will explain the unique characteristics of Yoko Tuna, the yokozuna of the tuna world, and yellowtail farming, which the company has been involved in for many years. The tour will visit where the yellowtail are brought in and the fish processing plant. 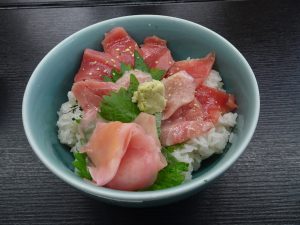 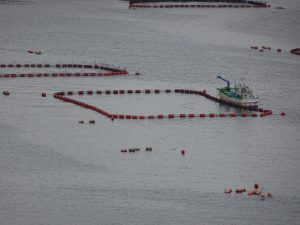 Kunisaki City, which covers approximately half the Kunisaki Peninsula located in the northeast of Oita, is an area surrounded by verdant mountains and the pleasant Seto Inland Sea which was known for its fishing industry, especially cutlassfish and octopus. However, in recent years, catches have reduced, with only 1784 tons in 2013 (according to the Census of Fisheries by the Ministry of Agriculture, Forestry and Fisheries), half the amount caught 20 years earlier. Along with a lack of young workers entering the industry, the fishing industry has been declining in Kunisaki year by year. In response to this situation, the City of Kunisaki, members of the fishing industry, and Yanmar Co., Ltd. joined forces to stimulate the local economy by starting an oyster farm using an old tiger prawn farm.

Oysters grown here are small in size with uniform shells, of the type preferred when eating them raw as in the West, and have been called “black gems” for their beauty. Oysters grown here are also used at restaurants with Michelin stars. In contrast to the farming methods used in other areas known for oyster farming, such as Hiroshima and Miyagi, Kunisaki Oysters are raised individually from seeding to harvest using the single seed method. Since the oysters can move freely within their cage, there is less accretion which can lead to odd smells or tastes, and high-quality, delicious oysters can be grown. The water quality of the farm is also tested approximately once every two weeks, and before being shipped they are purified with seawater which has gone through an antiviral filter, further ensuring the oysters are safe to eat.

◆A Kunisaki City official and Mr. Motoichi Kato, Marine Farm Director of Yanmar Co., Ltd., will speak about this unprecedented initiative in Kunisaki City to farm oysters in a collaboration between the local government, members of the fishing industry, and Yanmar, efforts to establish the Kunisaki brand, and the secret of Kunisaki Oysters’ deliciousness. There will also be the opportunity to view the oysters being prepared for shipment. 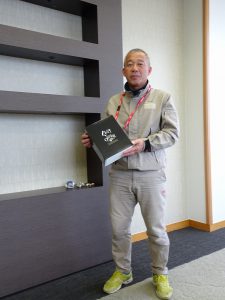 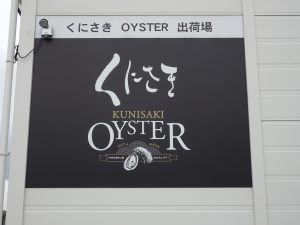 Kunisaki Time, Inc. began as Aki Kosakusha, which was founded in 1998 by the company president, Mr. Yuki Matsuoka, when he moved back to his hometown of Kunisaki in search of nature and a slower pace. The company started its current business when it made collapsible cardboard mannequins to be used in the first exhibition of Mr. Matsuoka’s wife, a knitwear designer. This unique concept of combining two-dimensional pieces together to create a three-dimensional form has resulted in collaborations with Disney and Sanrio, and been used for window displays by the fashion brand Hermès. Kunisaki Time implemented a system of three days off per week in 2013, with the employees improving some skill of theirs in the three days off. Kunisaki Time has been promoting this concept, with the goal of increasing the skill levels of the employees and as a result the sales of the company.

◆The tour will visit the company’s Aki workshop, and hear from Mr. Matsuoka about the creation and production of “Made in Kunisaki” products which have received high praise from around the world. There will also be an opportunity to see the Oimatsu, a noh backdrop that was three-dimensional for the first time, which was used in the Bungo no Kuni Funai Shin Noh performance that was part of the 33rd National Cultural Festival and 18th National Arts and Cultural Festival for Persons with Disabilities held in Oita in 2018. 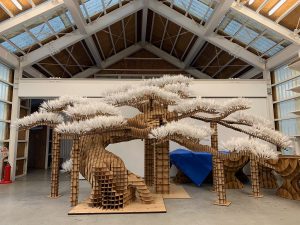 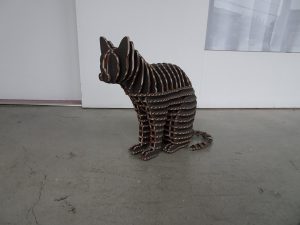 3. Cost: 18,000 yen per person including transportation, accommodation (breakfast and dinner included), and lunches

4.Participants: Limited to 10 applicants. (Only one reporter or one photographer from each company, but two participants from each TV team will be acceptable.)

(1) This tour is organized by the Oita Prefectural Government and, and planned and operated by the FPCJ.

(4) Neither the Oita Prefectural Government nor FPCJ will be liable for any inconvenience, trouble or accidents that might occur during the tour.

(6) This press tour is intended to provide opportunities for news coverage. We request that all participants send a copy of the content of their coverage (article, video, or audio in the case of radio) to the Oita Prefectural Government  through the FPCJ after their reports are published or aired. When your report is in a language other than English or Japanese, we also ask you provide a summary in English or Japanese. With receiving your application, we assume that you agree to these conditions.