The Japanese Government announced in its New Agricultural Policy for the 21st Century (2007 edition) that it will focus on disseminating information on Japanese foods and ingredients overseas and set a target of boosting agricultural, forestry and fishery products and foods to 1 trillion yen by 2013, more than double the 2007 level. This attitude shows a shift in Japanese agricultural policy from defensive to proactive.

This press tour will take you to Fukuoka Prefecture, where, even amid the global recession, people are proactively trying to export local agricultural products by making the most of Fukuoka’s name and supremacy as a physical distribution base. You will visit the agricultural area in the south, including Yame City, Hoshino Village, and Asakura City, to look into thepotential of Japanese agriculture, and also cover business operators who are taking on the sluggish consumption worldwide in a spirit of challenge.

*The Fukuoka Prefecture Food Export Promotion Council, the host, and the Foreign Press Center Japan have co-organized this press tour.

1. Strategies for establishing Fukuoka as an international ‘brand’ and Asia Gateway 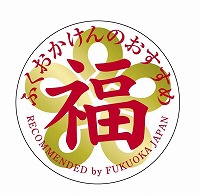 The total export value of agricultural products of Fukuoka Prefecture jumped from 200 million yen in FY 2003 to more than 1 billion yen in FY 2007. The prefecture aims to exceed 2 billion yen by 2010, double the 2007 level. To make this happen, the prefecture and the JA group jointly financed and established the Fukuoka Agricultural Products Trading Co,. Ltd last December. The establishment of this type of company, financed by a local government, was the first case in Japan. 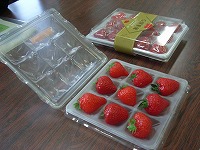 Fukuoka Prefecture is also consolidating its status as a distribution hub for other Asian countries. Fukuoka Airport handles 18.21 million passengers per year and its annual trade value is 1.29 trillion yen in total. The airport ranks 4th in Japan in both the number of passengers and trade value, connecting 16 overseas cities, mainly in Asia, and operating as agateway to West Japan and the Asia-Pacific region. In addition, Hakata Port plays a key role as an international port. The port is the only one from Kobe westward where North American and European container routes are established. The port also has become Japan’s new gateway to dramatically growing East Asia. It handles 750,000 international sea passengersper year, and has ranked first among Japanese sea ports since 1993.

In this press tour, the Fukuoka Prefecture Food Export Promotion Council and Mr. Hiroshi Watanabe, president of the Fukuoka Agricultural Products Trading Co, will explain various activities leading up to the establishment of the Fukuoka brand as well as their future visions. 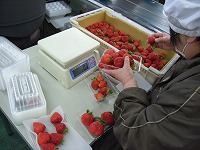 Amaou strawberries have established a high-quality brand image not only in Japan but also inAsia including Hong Kong and Thailand. The development of Amaou goes back to the late 1990s, when Toyonoka strawberries grown in Fukuoka were outstripped by Tochiotome strawberries from Tochigi Prefecture as the No.1 brand in Japan’s strawberry market. This development prompted Fukuoka Prefecture to embark on developing a variety of strawberry that was redder and larger than the Toyonoka. After five years of trying, Amaou strawberries came onto the market in 2002. At the same time, the prefecture also turned its attention to Asian countries whose income levels were surging. It started to export Amaou strawberries to Hong Kong in 2003, and recorded an increase from 1.4 tons in 2003 to 70.4 tons in 2007. It also started to export them to Russiaand the United States while developing a new type of package which enables them to remain fresh without suffering damage during long distance transportation.

Fukuoka Prefecture also focuses on making use of intellectual property rights as part of its international branding strategy. It limited production of Amaou to farmers within its borders and the local agricultural cooperative association, which was permitted to use the brand name, registered the name Amaou (King of sweetness) in Hong Kong and Taiwan, importers of Amaou. It also applied to register the Amaou variety in China, which has a huge market potential, to prevent them from growing Amaou without its permission. The prefecture is well prepared for protecting intellectual property rights in the agricultural area. 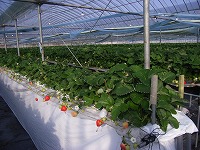 Amaou has proved beneficial to local farmers facing such serious issues as the aging population and lack of farming successors. As the strawberries are particularly large, thenumber of strawberries in one package was reduced, and so was the burden of packing for elderly farmers. The high quality brand has also eased the trends of people abandoning farming.

This tour will visit the Fukuoka Agricultural Research Center (Chikushino City), and go into the details of the story leading up to the birth of the Amaou strawberries, branding and intellectual rights strategy, and researches for the development of new packages. In Yame City, you will meet Amaou farmers who have introduced new farming facilities to reduce their physical burden, and also visit a packaging centerfor harvested strawberries. 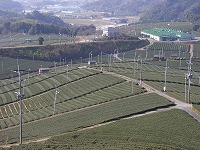 Yame green tea is produced in the southern part of Fukuoka Prefecture. Thanks to theinland climate and fog-prone nature of the locality, that particular area is considered ideal for growing green tea and the production of Gyokuro (green tea of the highest quality) in Fukuoka ranked the second after Kyoto, accounting for approximately 35 percent of the total production in Japan. In addition, its Gyokuro has also ranked at the top in the National Tea Competition for eight consecutive years, an unprecedented record, and its quality has gained a high reputation.

Yame green tea has established its brand in Japan, and is now taking on the challenge of advancing into foreign markets. Thanks to growing interest in Japanese food as a health food, the level of Japanese tea exports has been increasing, particularly in Europe, the United States, and Asia. The export value more than doubled from 760 tons in 2003 to 1,625 tons in 2007.

Fukuoka Prefecture has taken measures since 2007 under its three-year plan to establish a tea production system for export by adjusting to European standards on residual pesticide. The prefecture also hopes to create a tea production area in the foothills for the European market and thereby raise the income level of tea growers. This is because traditionally tea-picking starts in the lowlands and moves up into mountainous areas, and the price of tea decreases the later it is picked. 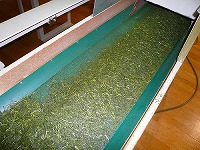 In the field of sales promotion, Fukuoka Prefecture has sent officials particularly to Germany, the center of tea trading, to assess the market and local needs, and has been actively promoting sales. Yame green tea has already gained a high reputation at European tea business meetings, in which some Fukuoka tea producers participated. Can Fukuoka Prefecture establish a brand that is unaffected by the global recession and the high value of the yen? Fukuoka’s proactive agricultural approach deserves close attention.

This tour will give you an opportunity to visit the vast tea garden in Yame City, home of Yame green tea, and also cover a tea factory of Hoshino Seicha-en Co. Ltd., which is taking the long-term view in exporting their highest quality green tea.

4. Shinozaki, an established sake brewery that takes up the challenges of exporting Japanese koji malt culture
<Go to the website of Shinozaki Co. Ltd. (Japanese only)> 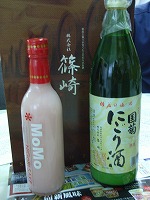 Thanks to its tasty rice  and clear water, Fukuoka is traditionally famous for sake. Shinozaki Corporation in Asakura City is a sake brewery that started in the late Edo period. Their “Kuni Giku Daiginjo” (Daiginjo is high quality sake brewed from the highly-milled rice) was developed in an attempt tomake sake for the global market. The reputation of this sake is growing at home and abroad. Kuni Giku Daiginjo won gold prizes in the National New Sake Awards for three consecutive years from 2005. The sake also received the top award in the Daiginjo category at the International Wine Challenge, the world’s largest wine competition, held in London in June last year. Shinozaki Corporation started to export it to the United States last September, handling all the complicated procedures for exporting, saying that the company would not know where and how their sake was sold if it totally depended on trading firms.

Over 70% of the company’s total sales come from shochu, distilled liquor. Sennen-no-nemuri, “Thousand-year sleep,” is a shochu made from barley and stored in oak barrels for a long time, quite an unusual method at the time when the company developed this shochu over ten years ago as the consumption of sake was going down. The Sennen-no-nemuri, winning gold medals at Monde Selection for nine years in a row, have grown into a national brand. This is one case where they tried something no one had ever done before.

Their latest challenging product came out this February both in Japan and the United States. A cloudy pink unrefined sake, nigori-zake, named MoMo (peach) is targeting the consumers in the United States where people like a variety of cocktails. MoMo is produced using pink yeast, utilizing the ancient Japanese biotechnology of sake brewing. They hope that theculture of koji, the basis of Japanese traditional food, will be known overseas. How will this pink sake, the embodiment of Shinozaki’s spirit of challenge, be evaluated?

5. Ishibashiya - bold attempt by a micro enterprise to introduce konnyaku to the world 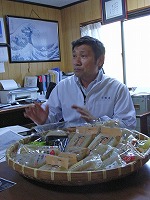 In a village in the mountains of Omuta City, near the border with Kumamoto Prefecture, a man called “Mr. Konnyaku” has been producing Konnyaku by Bata-Neri, a traditional method which is employed by only a few places. Konnyaku, also called konjac, is a gelatinous paste made from the root of the devil’s tongue plant. It is a zero-calorie filling food that, having little flavor of its own, is eaten together with other foods or sauces. Ishibashiya, a micro enterprise with 13 workers, started making Konnyaku in 1877 and has maintained the traditional taste. Its products are sold in 11 countries including Singapore and the United States.

The fourth President, Mr. Wataru Ishibashi, 51 years old, took over the family business in 1990 andchanged its business policy from painstaking Bata-Neri to mass production by mechanization. He intended to expand his business, but the mechanization left a smaller margin to the company although making a high turnover possible. He realized that his company could not compete with the sophisticated plants of big firms that were using robot technology. He decided to persist with Bata-Neri although he still owed money for the mechanization. He himself participated in food fairs in Singapore and New York to win a reputation for his Konnyaku, and his hope gradually came true. In a supermarket in New York, he surprised people by selling his stock of 3,000 packs of Konnyaku in three days. 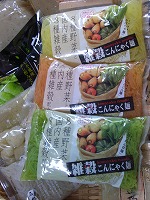 He also developed Konnyaku noodles, mixed with different cereals, for non-Asian consumers who were not familiar with Konnyaku. He started to sell the noodles three years ago. They were introduced not only in Japanese supermarkets but also in local restaurants abroad, and the market has expanded to11 countries including the United Kingdom, Germany and Australia. In addition, Ishibashiya, in collaboration with the faculty of pharmaceutical science, Fukuoka University, embarked on developing health foods. President Ishibashi is very enthusiastic about improving the status of Konnyaku by enabling his product to be designated as a special health food by the Ministry of Health, Labor and Welfare.

6. Remarks:
(1) Please follow the instructions of the officials on duty for photographing and filming.
(2) Fukuoka Prefecture and FPCJ will not be liable for any inconvenience, trouble or accident that might occur in the course of the tour.