Kozaki Town has a population of about 6,500, the smallest in Chiba Prefecture. During the Edo period (1603-1867), good groundwater and transportation using the Tone River enabled the town to develop brewing business and to provide sake, miso and soy sauce for Edo, the capital whose population was increasing. Besides that, the fertile land gave birth to flourishing agriculture including rice and soybeans production.
In this town, there is a brewery that has been in the business more than 300 years and still resolutely uses the brewing techniques of the Edo period. There also is a farmer who grows indigenous soybeans organically and manually produces miso. Some young people interested in agriculture or macrobiotic food have moved into Kozaki, drawn by this town where fermentation culture, which can be described as the foundation of Japanese cuisine, still remains vibrant. These people took the initiative in vitalizing the town at grass-roots level on the theme, “Kozaki, the hometown of fermentation.” Their brainchild, “Kura (brewery) Festival,” an annual event which offers people enjoyable brewery visits, attracts as many as 35,000 people, more than five times the town’s population.

The Japanese government, centering on the Ministry of Agriculture, Forestry and Fisheries, compiled in November 2011 a proposal to recommend that Japanese food culture should be registered on UNESCO’s “intangible cultural heritage” list. The factors characterizing Japanese food culture include, the proposal says, use of various fermented foods such as the ‘umami’ flavor of ‘dashi’ broth and sake, and connection with traditional events or rituals like the New Year celebrations.

The tour goes to Kozaki Town and has an interview with Mayor. Participants will visit a brewery which has revived traditional ways of Japanese sake-making including singing at the time of preparation for brewing, and a local farm that works as a bridge between urban people and agriculture through events in which you can experience the natural sequence from sowing soybeans to harvesting them and making miso. The tour will also cover a baker, moved from a city, who makes bread using sake lees as yeast, and a tofu shop owner who was once in a real-estate developing business in Tokyo and is now making tofu using local organic soybeans. The tour will meet people in the town who live from fermentation and learn about town-building based on fermentation culture.

*Chiba Prefecture hosts this tour and FPCJ cooperates with the planning and conducting of the tour. 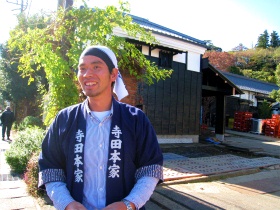 Terada Honke, an old sake brewery, has been making sake for more than 330 years in Kozaki since the Edo period. When the Japanese sake market remained sluggish due to changes in dietary habits in the post-war high-growth period, Terada Honke some years ago ventured to revive the traditional sake-making method, in which the whole process was carried out manually. Steamed rice, koji malt (steamed rice inoculated with starch-breaking molds) and water are put in a vat and mixed with large paddles while the workers sing “shikomi (preparation) songs” as the workers in the Edo period did to measure time. The taste of sake made by this traditional “Kimoto Zukuri*” method differs according to the year or the tank in which it is made. At a time when mechanization and standardization prevail in the Japanese sake industry, Terada Honke has been attracting attention as a rare brewery in the nation which sticks to the traditional sake-making methods that date from the Edo period. “Mygurt,” their new product making use of the power of microorganisms, is also popular as a non-alcoholic lactic fermentation drink derived from rice. Mr. Masaru Terada, the 24th successor of Terada Honke says, “Sake making is collaboration with microorganisms. Handling fermentation is a tricky job, as it changes in accordance with climate and other factors. By handing this traditional fermentation technique down to the younger generation, we carry on our culture.” Wishing to vitalize Kozaki as the hometown of fermentation, he has organized a “Fermentation Hometown Association” and planned various events. Terada Honke, therefore, is attracting young people in their 20s and 30s from all over Japan, from Hokkaido or from Kyushu, who aim to seek a career in sake making or natural farming.
(*) Kimoto Zukuri: At a low temperature, koji malt and steamed rice are put in a shallow tank to be mixed with paddles over a long time, which results in multiplication and fermentation of lactic acid. This method produces natural lactic acid, which prevents bacteria from being activated under strong acidity and produces strong and good yeast.

Mr. Kazushi Suzuki’s family has run a farm in Kozaki for generations. His company Kozaki Shizen Juku (meaning Kozaki School of Nature), produces organic rice and sells it directly to consumers. It also produces organic indigenous soybeans and miso made from them. He also plays a leading role in organizing events in which hundreds of urban participants can experience sowing, weeding, harvesting and miso-making, offering many city dwellers an opportunity to get a taste of agriculture and fermentation culture. He works as a bridge between city people and agriculture by, for example, giving advice to urban people who are interested in agriculture or introducing good land to those who want to start farming in Kozaki. He also teaches farming and miso-making to local children. “For the past 20 years or so, Kozaki has been lacking energy because the population was declining. But in recent years, fermentation has given life to the whole town and I am happy to see many more young people. Because of this, the old people in the town have opportunities to demonstrate their traditional wisdom and are getting cheerful. I hope we can build a town where young people will be able to enjoy raising families,” says Mr. Suzuki. 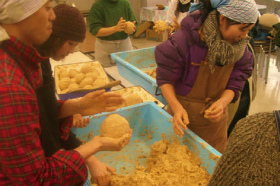 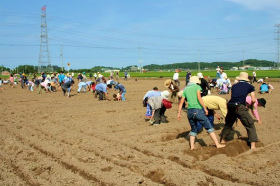 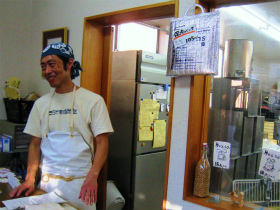 http://tsukinotofu.com/
Mr. Hiroyuki Shuura, once in the real estate developing business in Tokyo, reviewed his eating habits when he got ill, quit his job and started to learn about tofu-making at a tofu shop, when he encountered the satisfying taste of indigenous soybeans grown by Mr. Suzuki of Kozaki Shizen Juku. He then decided to move to Kozaki, which has rich groundwater, and in 2009 he opened his tofu shop “Tsuki no Tofu” (meaning Moon Tofu). “I opened this shop in Kozaki because I met this tasty bean species,” says Mr. Shuura. His tofu, made only from domestic organic soybeans, Kozaki’s mineral-rich groundwater, and natural bittern, is now making a new specialty for Kozaki. 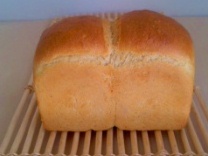 Mr. Tomoyuki Fukushi, originally from Matsudo City, Chiba Prefecture, used to visit Kozaki frequently as he wanted to become a farmer. While cultivating wheat and soybeans, he wanted to process what he grew himself, then opened his bakery “Fuku-chan no Pan” (meaning Fuku-chan’s Bread) in Kozaki in 2009. Bread made with dough fermented by the yeast made from the sake lees of Teradaya Honke, or home-made doburoku sake, brewed using a very old formula of the Kamakura period, is highly evaluated by customers as it is digested very easily. His bread also contains Terada Honke’s groundwater or the soymilk of “Tsuki no Tofu” as its ingredients. The baker’s passion for natural ingredients and the essence of Kozaki are condensed in this fermented food.

5. Yuichi (Evening Market)
- A local get-together where Kozaki’s hand-made products are on sale - 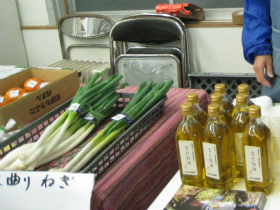 As part of the efforts to revitalize Kozaki, the Yuichi (evening market) is held in the evening of every Friday at the former town office. The main organizers of this get-together are the members of the “Fermentation Hometown Association,” a group which includes Terada Honke, Kozaki Shizen Juku, Tsukino Tofu, and Fuku-chan no Pan. Chemical-free vegetables and hand-made produce unique to Kozaki are on sale. You can talk directly to the producer of a product. Yuichi offers a place for exchange among local people.
Mr. Masaki Saito, 37, a doctor of environmental symbiosis, who moved to Kozaki and became a member of the association and teaches practical agriculture, explains what the Yuichi is about and guides the tour to the market.

*Chiba Prefecture hosts this tour and FPCJ cooperates with the planning and conducting of the tour. Tour participants bear part of the cost, but the purpose of the tour is not profit-making.

3. Cost: 2,000 yen per person including transportation and lunch
* FPCJ will later inform the participants of methods for payment, cancellation fee etc.

6. Remarks:
(1) There may be some restrictions on photographing and filming at the tour sites. Please follow the instructions of the officials on duty.
(2) FPCJ and Chiba Prefecture will not be liable for any inconvenience, trouble or accident that might occur in the course of the tour.

(3)On the tour, participants will have a lunch of macrobiotic food using local organic vegetables, tofu from “Tsuki no Tofu” and so on.
(Restaurant “Fura” http://homepage2.nifty.com/fura/ )
(END)