In April this year, the Tokyo Metropolitan Government updated its damage estimates of a magnitude-7.3 earthquake with an epicenter in the north of Tokyo Bay. 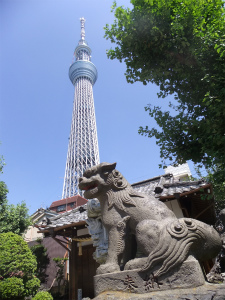 The new estimates show that the earthquake would kill about 9,700 people, registering an intensity of upper 6 or higher on the Japanese scale (“shindo”) of 7 in 70 percent of Tokyo’s 23-ward area. It is also estimated that about 5,600 deaths would be caused by the quake itself; and some 4,100 by fire especially in the areas crammed with wooden houses.

Based on the new estimates, the Tokyo government plans to bolster disaster control measures for the areas densely packed with old wooden houses that have a risk of collapse and fire, and make more buildings earthquake-resistant. In addition, learning lessons from the Great East Japan Earthquake of March 11, 2011, which caused large numbers of people to be unable to get home even in Tokyo, ward governments and enterprises have started discussing how they can cooperate in accepting people at a time of disaster.

The March 11th disaster served as a reminder of the importance of local communities and “kizuna” (bonds) in neighborhoods. “Mutual support among neighbors” and “self-help” is now seen as a key to minimizing damage and saving people’s lives. In the Great Hanshin earthquake in 1995, in total 97.5 % of the people who survived after being buried or trapped, were saved by nearby people ---family members, friends, neighbors and passersby (62.6 %) --- or helped themselves (34.9 %). Only 1.7 % of the survivors were saved by rescue corps.

The press tour will begin with a briefing by Dr. Shin’ichi Sakai, Associate Professor at the University of Tokyo’s Earthquake Research Institute, on the outline of the new damage estimates released by the Tokyo Metropolitan Government. The participants will also see the new seismic observation network that helped in the calculation of the damage estimates. Then the tour will visit Sumida Ward to see the case examples of efforts in preparing for Tokyo’s major challenges in a disaster, such as how to reduce damage in areas crammed with old wooden houses, where a fire could spread rapidly; and how to help people unable to return home. As it still has neighborhoods with high concentrations of old wooden houses, Sumida Ward has areas ranked in the ten most dangerous districts in Tokyo. But it is also characterized by unique disaster preparedness efforts by the ward government and local residents who have maintained communities where people can help each other in case of a disaster. Sumida Ward also houses the Tokyo Sky Tree(r), the world’s tallest tower, that opened last May. Inside the tower, the municipality has set up a new satellite disaster management facility called “Crisis Management Base.”This new facility will serve as a function to provide evacuation instructions and distribute relief goods. The tower also has high-performance cameras 260 meters from the ground, so that officials at the disaster management center in the ward office can see in real time, for example, where a fire is burning, and can give out prompt directives to evacuate.

The participants will cover these cases on site. September 1st is the official government-designated Disaster Prevention Day, since the time when the Great Kanto Earthquake hit Tokyo on that day in 1923, causing an enormous number of casualties. The period between August 30th and September 5th is designated as Disaster Prevention Week. Taking this timing, this press tour will cover how Tokyo is preparing for a possible major earthquake directly striking beneath the capital city.

*This press tour is hosted, planned and conducted by FPCJ. 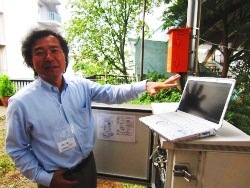 The Tokyo government calculated the latest damage estimates based on a survey using the Metropolitan Seismic Observation network (MeSo-net). The new network was developed as part of a Special Project for Earthquake Disaster Mitigation in the Tokyo Metropolitan Area, which was launched in 2007 at the initiative of the Ministry of Education, Culture, Sports, Science and Technology. Facing difficulty in securing places to set up observatories in the metropolitan area, researchers at the ERI, who played a key role in the project, developed the large-scale observation network by installing 296 underground seismic stations in elementary and junior high schools. The data obtained from the stations, which were placed at 2 to 5 kilometer intervals in school yards, transmitted immediately to the ERI, revealed the subterranean structure of the metropolitan area. As a result, the researchers found that a plate boundary that could become the epicenter of a major earthquake is closer to the surface than previously assumed, prompting the metropolitan government to review its damage estimates.
Upon requests from schools where the seismic stations are installed, Dr. Sakai has been to those schools to give lectures to students. The doctor says “the presence of the stations has inspired students to learn more about possible earthquakes. Especially after the March 11th disaster, I see changes in students’ awareness of disaster preparedness.”
Dr. Shin’ichi Sakai will brief on the outline of the new damage estimates released by the Tokyo Metropolitan Government. He will also talk about the seismic observation network installed in elementary and junior high schools; the significance of disaster preparedness education in disaster-prone Japan; and the changes in children’s awareness after the March 11th disaster. 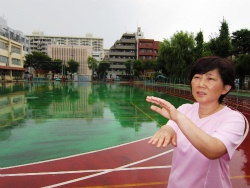 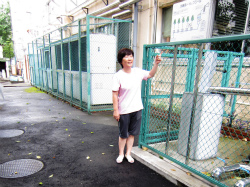 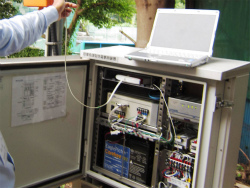 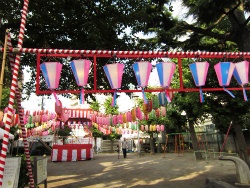 3. Disaster Management Center of the Sumida Ward Office
- “Dangerous” Sumida Ward, protected by advanced technology and people to people’s bonds (kizuna) –
http://www.city.sumida.lg.jp/multilingual/index.html
Sumida Ward has the atmosphere of an old downtown area which has been prosperous since the Edo period (1603-1868). Besides the traditional area with the Ryogoku Kokugikan, the home of professional sumo, the Tokyo Sky Tree, the tallest tower in the world opened this year, is attracting people as a new tourist spot. 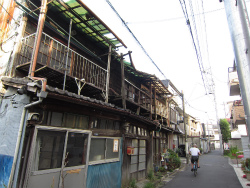 In Sumida Ward there are many areas densely packed with old-style wooden houses. Those close-packed wooden houses were the results of disorderly construction during the high economic growth period between the 1950s and the 1970s. In the disaster, they have a high risk of collapse and fire due to the narrow streets and little space between the houses.
According to the “Comprehensive ratings for vulnerability” announced by the Tokyo Metropolitan Government, three areas in Sumida ward were ranked in Tokyo’s worst ten areas at risk.
In views of this danger, Sumida Ward has conducted a “Fireproof Promotion Project,” as a pioneer nationwide. The ward has expanded the width of roads to prevent fire from spreading, and created parks and open spaces. They also have made unique efforts to promote community building for mutual help when a disaster occurs.

・Cameras installed at 260 meter-high points on the Tokyo Sky Tree catch real time situation in a disaster
Sumida Ward has set several cameras for disaster management in high places. This system helps effective evacuation instructions, by recognizing the locations of fires and the wind direction quickly through the camera footage. There are two high spec cameras installed at 260 -meter level of the Tokyo Sky Tree, covering 360 degrees of the ward.
In a disaster, these cameras will catch the images of the entire ward and send them in real time to the disaster management center in the Sumida Ward Office. They can provide information to help the local government to know where it is safe and where it is not.
The tour will visit the disaster management center in the Sumida Ward Office and hear a briefing on the outline of its disaster management policy, measures for high density wooden dwellings and for commuters unable to return home, as well as its cooperation with the Tokyo Sky Tree. The tour will also see a remote control demonstration of the cameras on the Tokyo Sky Tree, which will show changeable angles and zooming. 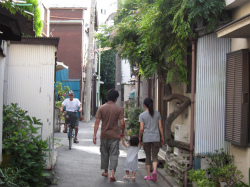 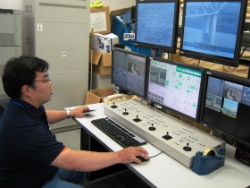 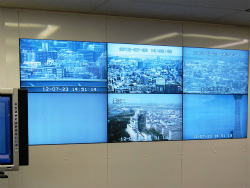 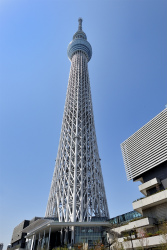 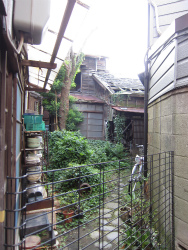 5. Ichitera-kototoi Area, Sumida Ward (disaster management for a district of densely- packed wooden houses)
- Residents’ activities to change the area from “dangerous” into “safe” with the power of the community -
http://hitokotokai.com/
Ichitera-kototoi area in Sumida Ward is categorized as one of the ten highest risk areas in Tokyo in time of earthquake and fire, because old-style wooden houses are built close together along narrow streets. On the other hand, the area is full of a historical flavor with temples, shrines, traditional restaurants, and backstreets.
Hitokotokai(*), a local residents’ association, was established here with the goal of making the district sustainable for a hundred years, and it is now carrying out some unique activities to build strong human relationships in everyday life, which can be valuable for mutual aid in case of disasters.
Voluntary community associations called “chokai” are everywhere in Japan, but many of them have a problem of aging because the members are mainly those living long in the communities and few young people are participating. Hitokotokai organizes disaster management drills in elementary schools to encourage newcomers to join their community activities. Many young parents have participated in the disaster evacuation drills with their children, and tried to keep their bodies warm with cellophane wrap and newspapers, and made lanterns using waste oil. It is said that after the 3.11 disaster there is a new sense of awareness among new residents, and more and more young people are joining chokai. When the Great East Japan Earthquake occurred, this area promptly accepted in local primary schools the stranded commuters who were on their way back home to Chiba from their offices in Tokyo. At that time, a women’s group from the chokai went to the primary school and helped them to make emergency foods, proving that their drills had been useful. 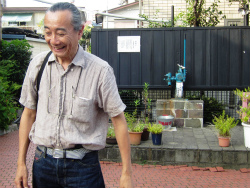 In cooperation with the Sumida Ward government, Hitokotokai is also promoting “Rojison”, equipment for rainwater reuse, and “Yukien”, small areas of green land used in case of disasters. Rojison stores rainwater collected from the roofs of nearby houses in an underground tank, and draws it up by a hand pump. In case of disasters, the water can be used for drinking through filtration and also for extinguishing fires. Also housing disaster management equipment and goods, Rojison is a kind of street furniture. The real purpose of Rojison and Yukien, however, is to contribute to the formation and maintenance of the local community by providing some places where the local people gather to take care of the plants and have a chat.
In September, Hitokotokai will start a research project on unoccupied houses in the area, in cooperation with local chokai. As the population ages, old wooden houses will be left unoccupied and uncared-for, making them more vulnerable to collapse and fire. With the help of experts on architecture and university students who study architecture and sociology, they are trying to assess the current situation and take necessary measures including finding people who wish to rent the houses.

(*)Mr. Shigemoto Sahara, Hitokotokai (Association to Make Ichitera-kototoi a Disaster Prevention Area):
Hitokotokai is made up of six chokai in the Ichitera-kototoi area (about 7 ha land with 12,000 people) in Sumida Ward, and the “Waiwaikai” volunteers’ group. Mr. Sahara is a leading member of the Hitokotokai. Mr. Kiku Sahara, his ancestor, established in the Edo period Mukojima-hyakkaen, a well-known flower garden in the area, and Mr. Shigemoto Sahara is the eighth generation. Mr. Sahara says: “Even if we prepare hardware, disaster management will not work without a spirit of mutual aid. It is important to establish a community where people can live with a sense of security against any disasters.”
After having a briefing from the members of Hitokoto-kai, the tour will have a guided tour with Mr. Sahara of the dense wooden housing district, taking a look at Rojison and Yukien.

3. Cost: 2,000 yen per person including transportation and lunch
* FPCJ will later inform the participants of methods for payment, cancellation fee etc.

4. Participants: Limited to the 10 applicants basically.
(Only one reporter and one photographer from each company, but two participants from each TV team will be acceptable.)

6. Remarks:
(1) There may be some restrictions on photographing and filming at the tour sites. Please follow the instructions of the officials on duty.
(2) FPCJ will not be liable for any inconvenience, trouble or accident that might occur in the course of the tour.
(END)