At one time there were concerns over Japan’s deteriorating public order, but the situation is improving rapidly. The number of crimes exceeded 2 million cases in 1998, the highest number since 1945. The peak was in 2002 with 2.85 million cases, but the number has decreased since then. In 2011, the number of crimes was 1.48 million, the same level as 30 years ago. One of the reasons for the decrease in crime is considered to be the anticrime activities by citizens’ volunteer groups, the basis being people-to-people bonds within the local community. 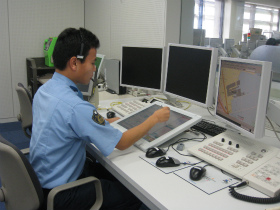 Having more than 5,000 volunteer watch groups, Saitama Prefecture boasts of having the largest number of anticrime volunteers in Japan. In Saitama around 1985, the crime rate was on the rise; it increased sharply around 1998, and peaked in 2004 with 181,350 cases. This number is equivalent to one crime occurring every three minutes, and 500 crimes occurring every day. As the number of crimes increases, the burden load per police officer also increased, and at one point the crime-arrest ratio dropped down to 12.8%. In Saitama, the ratio of police officers to citizens is the lowest in Japan and there is a serious shortage of police officers.

With the powerful initiative of the Saitama Governor, Mr. Kiyoshi Ueda, who took office in 2003, Wagamachi Bohantai, literally meaning “our town’s anticrime group”, started to expand. These private anticrime groups each consist of local citizen volunteer. The number of crimes in Saitama started decreasing after 2005, and for the next seven consecutive years the number decreased. In 2011 there were 100,253 crimes – a 44.7% decrease compared with 2004. Also because Wagamachi Bohantai’s activities contributed to deterring street crime, police officers were able to give their attention to serious crimes; the crime-arrest ratio improved for three consecutive years by the ratio reaching up to 29.1%, which means a 2.3 times improvement compared with the record low ratio in 2002. Especially, the crime-arrest ratio for serious crimes, such as murder, burglary and arson, recorded 73.6%, the highest ratio in the major prefectures in Japan.

In Saitama, as of 2011, there were 5,445 voluntary anticrime groups with 223,601 volunteers. These groups mainly consist of residents’ associations, and their main activity is to patrol their neighborhood. Saitama boasts the largest number of neighborhood watch groups in Japan; the second place is Tokyo with 3,840 groups; Kanagawa comes third with 3,160 groups. As if inversely proportional to the number of voluntary anticrime groups in Saitama, which is still increasing as of today, the number of crimes in Saitama is decreasing. It can be said that there is a good virtuous cycle thanks to the collaboration in terms of anticrime and public safety between citizens and police.

Through this press tour we will see the efforts for a safe society by attending the Saitama Governor’s press conference, briefings by the Saitama Prefectural Government and the Police, as well as observing Toda City Minamihara residents’ association anticrime patrol group, which is one of the pioneers of Wagamachi Bohantai. 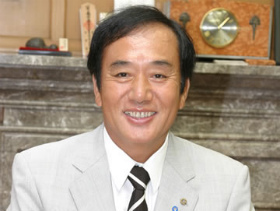 Governor Ueda aspires to help change Japan through prefectural initiatives and by implementing drastic measures and sharing these experiences and outcomes with other municipalities. Saitama Prefecture is home to some densely populated cities as well as smaller towns and also mountainous areas that are suffering from depopulation. Its diversified industry ranges from agriculture and engineering to services. It can be said that Saitama is the epitome of Japan. Since taking office, the Governor regards establishing a safe society as one of the important issues. He strongly believes that in order to prevent crimes that occur in the neighborhood, each and every citizen’s efforts are important. He is continuously supporting the citizens in enhancing awareness of crime prevention, and the encouraging activities of these voluntary neighborhood watch groups.

Born in 1948. Graduated from Fukuoka Prefectural Miike High School in 1967; graduated from the Department of Law, Faculty of Law, Hosei University, in 1971; Completed Political Science research course at Waseda University Graduate School in 1975. After serving as part-time lecturer at the Ministry of Construction’s University of Construction, he was elected for the first time to the House of Representatives in 1993. He was elected as the 57th Governor of Saitama Prefecture in 2003, and is currently in his third term of office. 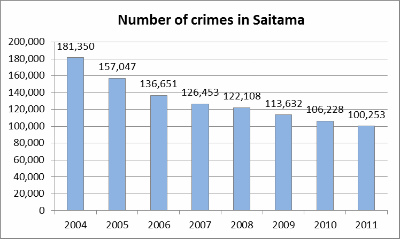 However, public safety in Saitama is still in a severe situation, as particular types of crime are occurring at a high rate. Snatchers in neighborhoods and car thefts are increasing; the amount of money lost by “bank transfer scams” is increasing sharply. 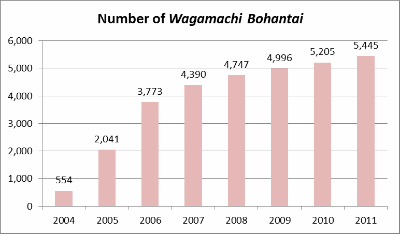 A large factor to compensate for the shortage of police officers was the activities of the Wagamachi Bohantai, the voluntary neighborhood watch groups. Alerted by the record high reported crime cases in 2004, Saitama Prefecture in the same year put into effect an anticrime and city planning ordinance. The next year, 2005, the first anticrime and city planning plan was formulated, and the most important issue was to organize the voluntary neighborhood watch groups. Saitama Prefecture trained leaders for the groups; Saitama Prefectural Police indirectly supported the activities of the groups by providing information on crime occurrence. Eventually, activities by the Wagamachi Bohantai contributed to deterring street crime, and police officers were able to turn their attention to serious crimes, which led to the improvement of the crime-arrest ratio and in decreasing the number of crimes. 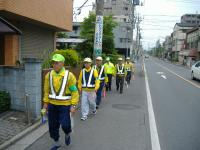 Toda City Minamihara residents’ association anticrime patrol group was organized in April 2003. At that time, public safety in Toda City was deteriorating with crime rates the worst or second worst within Saitama Prefecture. Under the circumstances, the Minamihara residents’ association was requested by the local police station to form a neighborhood watch group. At the time when Minamihara’s group was formed, there were only 12 members and they had no idea of how to patrol. Some members had to leave because their family was opposed to participating in the group activities, and the group had trouble recruiting members. But through many trial and error processes, they kept going with the sole determination of making their neighborhood a safe place.

Minamihara’s persistent efforts yielded results; in 2003 when their group was formed, there were 33 cases of break-ins in their neighborhood, 9 cases in 2004 and zero in 2005. Their achievements were recognized and for five times from 2005, their group was appointed as model programs to promote neighborhood watch groups, which were led by the Japan National Police Agency. Also the group in 2009 received a Prime Minister’s Award, in honor of contributing to the community’s safety and security. 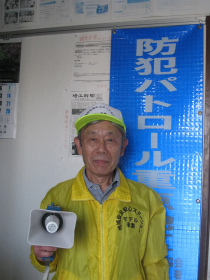 It has been nine years since Minamihara’s watch group was formed. Currently there are 8 small groups with a total of 58 members. Minamihara does a patrol almost every day, altogether 22 days per month. During school holidays, in collaboration with the local junior high school, they patrol with students.

Today in Toda City, most of the residents’ association is involved in neighborhood patrolling. Toda City had the highest or the second highest crime rate in all of Saitama Prefecture, but in 2010, the city’s crime rate vastly improved; the number of crimes in 2003 was the worst with 4,610, but with only 2,330 cases in 2010 it was the 7th worst in the prefecture’s 72 municipalities. It can be said that the citizens’ consciousness about crime prevention is remarkably improving, and that this is reflected in lower crime rates. These voluntary anticrime activities not only serve to deter crimes, but also to bond the local community tighter, preventing elderly citizens’ isolation, and vitalizing the local community.

The tour will meet Mr. Kenjuro Abe (76), founding member and the leader of the Minamihara residents’ association anticrime patrol group, and learn about their activities, as well as accompany the group on an actual patrol.

*Foreign Press Center/Japan has organized this press tour in cooperation with Saitama Prefecture. Tour participants bear part of the cost, but the purpose of the tour is not profit-making.

3. Cost:
2,000 yen per person including transportation and lunch
* FPCJ will later inform the participants of methods for payment, cancellation fee etc.

4. Participants:
Limited to 10 applicants in principle
(Only one reporter and one photographer from each company, but two participants from each TV team will be acceptable.)

6. Remarks:
(1) There may be some restrictions on photographing and filming at the tour sites. Please follow the instructions of the officials on duty.
(2) FPCJ will not be liable for any inconvenience, trouble or accident that might occur in the course of the tour.
(END)