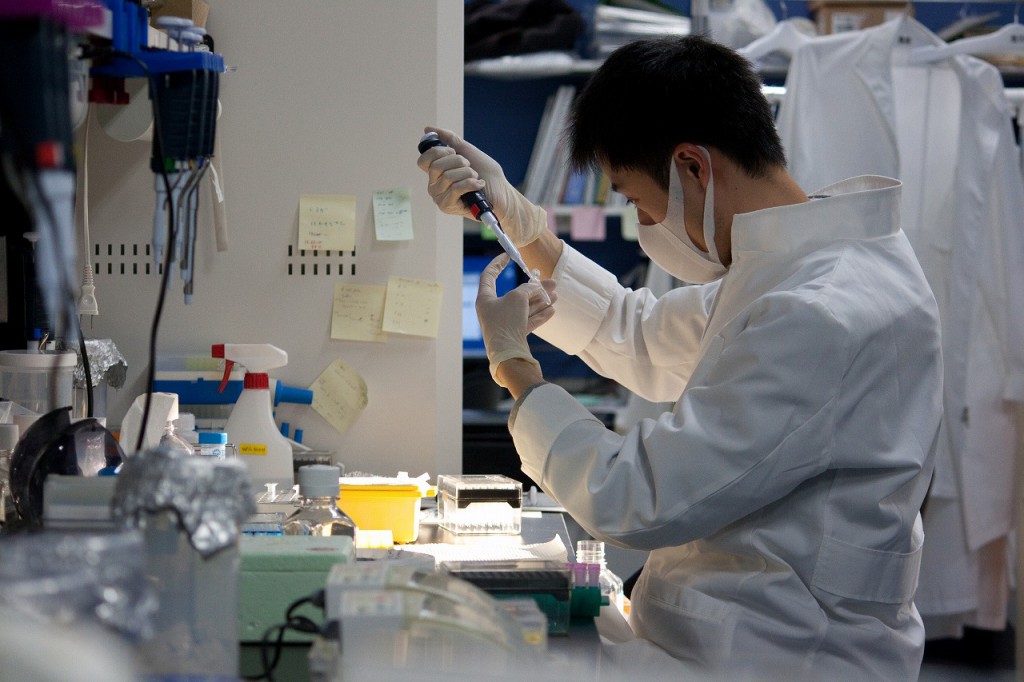 Kyoto University President Juichi Yamagiwa says that the university is unique for “Always questioning things, and pursuing the true nature of their properties,” and “Having places where people can debate freely, regardless of status.” This press tour will focus on life science, visiting Kyoto University’s labs carrying out creative research.

Based on the results of recent research, efforts have begun on research with the goal of regenerating human organs and tissues, and using iPS cells to develop new medicine. There are hopes that this research will be applicable to illnesses which until now have had no effective treatment available. Kyoto University is pioneering the frontier of life science, and this press tour will visit the Graduate School of Science and the Center for iPS Cell Research and Application (CiRA), which Professor Shinya Yamanaka is the director of.

*This press tour is sponsored by Kyoto University, and planned in cooperation with the FPCJ.

*This press tour requires participants to bear part of the cost, but is not a profit-making enterprise.

1. Kyoto University Center for iPS Cell Research and Application (CiRA): 10 Years After the Discovery of iPS Cells, Moving on to Clinical Research 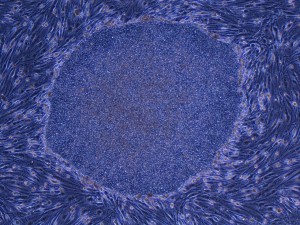 It has been 10 years since the announcement of research results from Japan that rocked the global medical community. This research led to a revolution in the field of life science. The discovery of a multi-purpose cell that can be made by introducing genes into human body cells such as skin or blood, with the potential to transform into other cell types such as heart, liver, or nerves.

These iPS cells were discovered by Professor Shinya Yamanaka, winner of the 2012 Nobel Prize in Physiology or Medicine.

Professor Yamanaka’s research team succeeded in generating iPS cells (induced pluripotent stem cells) with mouse cells in 2006 and with human cells in 2007, and it is hoped they will have applications in regenerative medicine and pharmaceutical research. Ten years after the initial discovery, the research has moved to the next stage of clinical research. 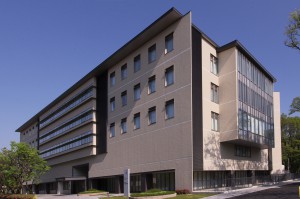 This press tour will be visiting the Kyoto University Center for iPS Cell Research and Application (CiRA), where this cutting-edge research is being carried out. Established as the Center for iPS Cell Research and Application under the Institute for Integrated Cell-Material Sciences (iCeMS), in 2010 the CiRA was reestablished as a full institute with Professor Yamanaka serving as the director. With the goal of advancing both fundamental and applied research on iPS cells, research is being carried out in five divisions based on a mid-term strategy.

The tour will receive an explanation of the basics of iPS cells and the pioneering research being carried out at CiRA from associate professors Dr. Knut Woltjen, Dr. Hidetoshi Sakurai, and Dr. Shin Kaneko.

Dr. Woltjen is a member of the Department of Life Science Frontiers, which has succeeded in determining the mechanism for initializing cells with iPS cells, and in using genome engineering to generate iPS cells to knockout genes. This research can help improve understanding of the mechanisms behind various illnesses, and has the potential to lead to individualized medicine.

Dr. Sakurai is a member of the Department of Clinical Application, which is researching treatment for muscular dystrophy using iPS cells. They are seeking to develop a method to transplant muscle progenitor cells differentiated using iPS cells to the impaired muscles, and using cells from muscular dystrophy patients to reproduce the diseased state for use in drug development. They are working on an efficient method to differentiate iPS cells into muscle cells.

Dr. Kaneko is a member of the Department of Cell Growth and Differentiation, which is researching using iPS cells to regenerate immune cells for use in treatment of cancer and infections such as HIV. In addition to analyzing the mechanism of how to prevent virus infection in the first place, and the establishment of cells that regulate immune response, they are building a system to provide a stable supply of high-quality iPS cells. 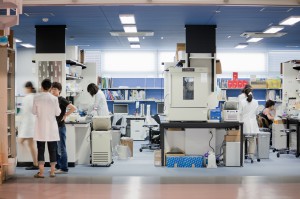 A CiRA science communicator will then provide a guided tour of the center. CiRA is set up in the open lab style common in the west, with research being carried out in open spaces without dividers between the different labs. 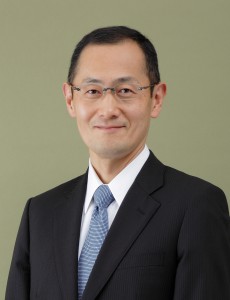 CiRA director Dr. Yamanaka is known not only for being a Nobel Prize recipient, but also for his efforts to promote research in iPS cells, including participating in a full marathon as a charity runner and collecting donations through crowd funding. Professor Yamanaka, the face of iPS cell research, will speak about his research and the potential of iPS cells.

Dr. Shinya Yamanaka is the Director of the Center for iPS Cell Research and Application (CiRA) at Kyoto University. In 2012, Dr. Yamanaka was awarded the Nobel Prize in Physiology or Medicine for his discovery that adult somatic cells can be reprogrammed into pluripotent cells. By introducing the genes for four factors that turn genes on and off, he induced the skin cells of adult mice to become like embryonic stem cells, which he called induced pluripotent stem (iPS) cells. This iPS cell technology represents an entirely new platform for fundamental studies of developmental biology. Rather than using disease models made in yeast, flies, mice or other animals, iPS cells can be taken from patients with a specific disease. As a result, they contain a complete set of the genes that resulted in that disease—representing the potential of an almost perfect disease model for studying disease development, new drugs and treatments. 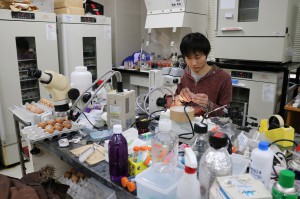 The foundations of regenerative medicine research in Japan, including iPS cells and ES (embryonic stem) cells, were built up over decades by a leader in developmental biology, Kyoto University’s Professor Emeritus Tokindo Okada (passed away on January 17, 2017, at the age of 89.) Professor Yoshiko Takahashi was one of Dr. Okada’s students, and is carrying out research at Kyoto University’s Graduate School of Science. 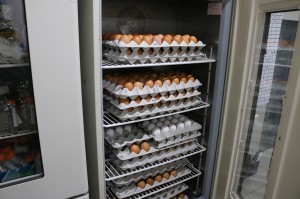 As they are also pluripotent cells, ES cells have been researched since before the discovery of iPS cells. Dr. Takahashi is known for having been the first in Japan to research ES cells, over 30 years ago. At the time, ES cells were not available in Japan, but a researcher at Kyoto University brought some back from a British university. Since there was no one else around who knew how to handle the cells, Dr. Takahashi stayed in the lab working on culturing ES cells, and contributed to research using ES cells as one of the few female researchers in the field. 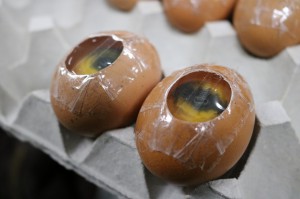 Currently, the main research theme Dr. Takahashi is working on is the mechanisms of animal development. The star of this research is chicken eggs. By opening a hole in the shell, it is possible to observe how the embryo changes from the time of fertilization onwards. Using that hole to insert needles and dyes, Dr. Takahashi and her team can observe in detail how the cells change. 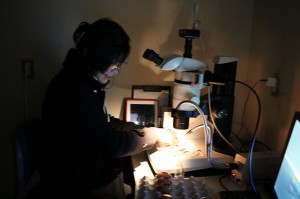 After observations are complete, the hole is covered with cellophane tape and a healthy chick is born with no complications. In other words, the research can be carried out with the animals remaining alive, which was not possible when using mice.

Although chickens and humans look significantly different, the early processes of cell division that occur are quite similar. Through this original research using chicken eggs, Dr. Takahashi is learning about how human bodies are formed, and hopes to apply it to determining the mechanisms of cancer in the future to help research possible treatments.

The tour will hear an explanation of Dr. Takahashi’s research, and have an opportunity to see how she and the students in the lab handle the chicken eggs. 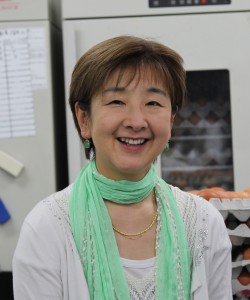 Yoshiko Takahashi specializes in a molecular and cell biology approach to organ formation, with a B. Sc. from Hiroshima University and master's and doctorate in developmental biology from Kyoto University's Department of Biophysics. She pursued postdoctoral fellowships at the Institut d'Embryologie du CNRS (France, 1988 to 1991), the University of Oregon Institute of Neuroscience (USA, 1991 to 1993), and Columbia University (USA, 1994). In Japan she has served at Kitasato University, Nara Institute of Science and Technology, and RIKEN CDB, before being appointed in 2012 as a professor in Kyoto University's Graduate School of Science. In 2010 she was the recipient of the Saruhashi Prize for leading Japanese women natural scientists, and in 2016 the Anne McLaren Award for outstanding women in developmental biology.

*The schedule and interviewees may be changed due to weather or other unforeseen circumstances.

3. Cost: 5,000 yen per person including transportation, accommodation and meal.

（1）There may be some restrictions on photographing and filming at the tour sites. Please follow the instructions of the officials on duty.

（2）Kyoto University and FPCJ will not be liable for any inconvenience, trouble or accidents that might occur during the tour. 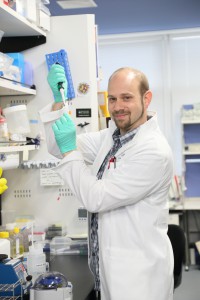 Dr. Woltjen Knut is the the associate professor of CiRA, Kyoto University. He grew up in rural Alberta (Canada), canoeing on the lake, or building tree forts in the forest. More a product of this natural environment than despite it, his curiosity in life science research grew – eventually leading to a career in biotechnology. He received B.Sc. from the University of Alberta and Ph.D. in Department of Bio Chemistory and Molecular Biology from the University of Calgary.He pursued postdoctral fellowship at Mt. Sinai Hospital, Samuel Lunenfeld Research Institute and Ontario Human iPS Cell Facility. 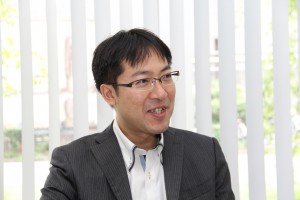 Dr. Hidetoshi Kaneko received M.D. and Ph.D. from Nagoya University. He pursued postdoctoral fellowship at Nagoya University and Center for iPS Cell Research and Application, iCeMS at Kyoto University, before being appointed in 2015 as an associate professor at CiRA. He aims to establish remedies for refractory muscle diseases, specifically, muscular dystrophy. 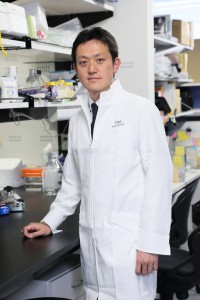 Dr. Shin Kaneko is the associate professor and Head of Facility of iPS cell Therapy at Center for iPS cell Research and Application (CiRA), Kyoto University. He received Ph.D. from Tsukuba University, and pursued postdoctral fellowship at San Raffaele Scientific Institute (Italy). In Japan he has served at the University of Tokyo as the assistant professor before being appointed in 2012 as an associate professor at CiRA. He engaged in research aimed at ensuring the safety of iPS cells and realizing immunotherapy by exploiting the special characteristics of iPS cells.

＊The copyright for the photos of CiRA on this page is owned by CiRA.