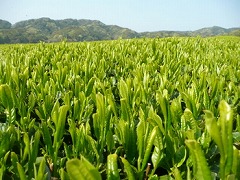 Shizuoka Prefecture is a well-known traditional green tea region. It is Japan’s top producer of green tea, and its high production technology produces high quality green tea, winning prizes in various fairs. In addition, green tea nowadays has other functions than just drinking or eating leaf tea – through various researches, evidence is starting to reveal that green tea contains many components that are good for human health.
In the run-up to the 4th International Conference on O-CHA Culture and Science in October this year, this press tour aims to grasp the varied efficacy of green tea, to look at the aspects of using tea in medical treatment and see where it is produced.
***********************************************

Shizuoka Prefecture is a well-known traditional green tea region with geographical features and climate suited for growing tea. It is Japan’s top producer of green tea, and has 41% of Japan’s tea production, and 42% in terms of crude tea output. With its high production technology, Shizuoka produces high quality green tea, winning prizes in various fairs.

In addition, green tea nowadays has other functions than just drinking or eating leaf tea – through various researches, evidence is starting to reveal that green tea contains many components that are good for human health, and is effective against aging, overweight, preventing influenza, the so-called lifestyle diseases, dementia, and others.

In the run-up to the 4th International Conference on O-CHA Culture and Science in October this year, this press tour aims tograsp the varied efficacy of green tea, to look at the aspects of using tea in medical treatment and see where it is produced. This tour will also cover a new business model in agriculture, having as its theme self-sufficiency and the environment, and bringing back into use the much-discussed abandoned farmland.

To the homepage of Shizuoka O-cha Plaza (Japanese only)
The visitors to the plaza can learn about tea, and taste Shizuoka-produced tea.
◆Tour participants will be briefed on general outline of Shizuoka’s green tea, on the present situation and future prospects of tea business in Shizuoka, and on the 4th International Conference on O-CHA Culture and Science, to be held in October 2010. Participants will also learn how to make delicious a delicious cup of tea.

To the homepage of Bio Farm Matsuki (Japanese only) 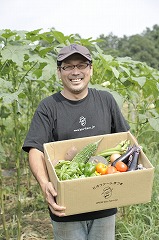 The owner of the farm, Mr. Kazuhiro Matsuki, moved to Shibakawa-cho, Shizuoka Prefecture, after working for 17 years in hotels and restaurants both at home and abroad. On abandoned farmland, he isdeveloping agricultural projects which will revive agriculture in mountainous land and diffuse a new business model.

Aiming at permanent agriculture by featuring self-support and recycling, the farm produces over 80 items of seasonal garden vegetables and herbs, which are 100% free of pesticides and chemical fertilizers.

Shibakawa-cho is at a height of 200m above sea level with abundant melt water from Mount Fuji, suitable land for agriculture. In the 20 areas of the 3 hectare farm, a rotation system is adopted and they are producing small amounts of but various kinds of vegetables. The farm is trying to use a form of agriculture which is environmental friendly and totally free from pesticides.

The farm has bio toilets, and their kitchen and office are lit with LED, with electricity generated by solar panel. They are also planning a biotope and floor heating and heating in the greenhouses from biomass.
◆Tour participants will have lunch at Restaurant Bios in the farm. After lunch they will have a small tour of the farm and interview Mr. Matsuki on the background of opening the farm, his current projects, future prospects and the challenges of this kind of farming.

To the homepage of Matsushita En (Japanese only) 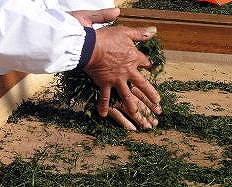 100% free of pesticides, using organic fertilizer and homemade grass compost, the owner,Mr. Yoshiharu Matsushita, is managing a 9 hectare organic tea field and he does everything from planting tea bushes to manufacturing tea.

Matsushita’s leaf tea “Organic de Teatime – from the land of Fuji” won the gold medal in the 2009 World Green Tea Contest.
◆Tour participants will see tea field, and the production of matcha (powdered tea). Mr. Matsushita will also share his background of starting making organic green tea, his current projects, future prospects and the challenges of his tea production.

To the homepage of University of Shizuoka

To name some major areas where green tea appears to be effective: anticancer, antioxidant, antibacterial, antivirus, reduces blood pressure and blood sugar, deodorant, prevents cavities. In December 2009, the University of Shizuoka and ITO ENconducted a co-research project and found that the catechin in green tea holds back the activities of the H1N1 virus; this was the first verification on a cellular level. A research program co-suggested by Shizuoka Prefecture and Shizuoka City, “From Shizuoka to the world: Research and development of next generation bottled tea drinks and tea extracts” was adopted as a Local Collective Research Development Program of the Japan Science and Technology Agency.
◆Tour participants will learn about the general efficacy of green tea from Dr. Naohide Kinae, President of the University of Shizuoka, as well as new approaches towards green tea such as the research and development of next-generation bottled tea drinks -and tea extracts

To the homepage of KAKEGAWA STUDY(Japanese only) 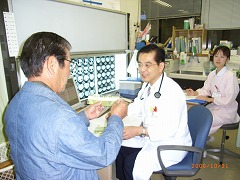 Dr. Yoichi Sameshima, Director of the Green Tea Medical Application Center of the Kakegawa City General Hospital, through his research on a more effective treatment forhepatitis C, found the possibility that green tea’s antioxidant and metabolism efficacy may be effective in preventing and treating the so-called metabolic syndrome.

KAKEGAWA STUDY is the epidemiology research co-conducted by Tohoku University, Kakegawa City and Kakegawa City General Hospital. The three-year research, which started in June 2009, is aiming to collect scientific evidence from human beings on green tea’s effect, to explicate which kind of green tea is most effective, and to develop new food products. By the time this research concludes in fiscal year 2011, between 5,000 and 10,000 citizens will have cooperated in the research.

Currently, it is said that 20 million people in Japan are either suffering from or are likely to suffer from metabolic syndrome, and 2/3 of the Japanese die of lifestyle-related illnesses. 230 million people in the world are suffering from diabetes’ effect and the number of patients is on the rise. In these situations, green tea’s anti-arteriosclerosis effect has been proved through many experiments on animals, but few on human beings, and is therefore it is not yet established scientifically. Therefore, the KAKEGAWA STUDY is a unique and widely-noticed major research.
◆Tour participants will learn from Dr. Sameshima about green tea’s efficacy against hepatitis C, and about the KAKEGAWA STUDY.

Before becoming Shizuoka governor in July 2009, Mr. Kawakatsu was professor of the School of Political Science and Economics of Waseda University, professor of the International Research Center for Japanese Studies, and president of the Shizuoka University of Art and Culture. He is promoting projects to make Shizuoka a place that is good to “live”, “visit”, “give birth, and raise children”, “study”, and “work”.

3. Cost: 10,000 yen per person including transportation, meals and accommodation
*FPCJ will inform the participants of payment methods, cancellation fee etc. later on.

5. Application: Fill in the application form below and send it to FPCJ by fax.

7. Remarks:
1) There are some restrictions on photographing and filming in the press tour. Please follow the instructions of the officials on duty.
2) Shizuoka Prefecture and FPCJ will not be liable for any inconvenience, trouble or accident that might occur in the course of the tour.