Notice: Ise Press Tour “The People of Ise and Jingu, the Most Sacred Site in Japan” 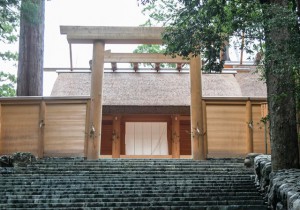 Ise Jingu is dedicated to Amaterasu Omikami, the ancestral kami (god) of the Imperial House of Japan. The Sengyo ceremony, the culmination of the Shikinen Sengu* event that happens once ever twenty years, was only just completed last year, but daily prayers are still performed for plentiful harvests and prosperity and to give thanks for the bounty of nature.

The people of Ise, living near the home of kami, have supported and passed on the traditions of Jingu that have continued for over 2000 years, the culture based on Shinto teachings, and even the heart, knowledge and skills of ancient Japan. Known as “residents of the old land of gods”, the people of Ise take pride in helping Jingu, and welcome pilgrims with all their heart. Jingu has always been a popular pilgrimage site, and in the past 1 out of 6 Japanese people are said to have made the pilgrimage.

This press tour will go to Ise Jingu, the most sacred site in Japan, as well as covering the Oshimenawahari ceremony in Futami, the land of purification (below, right pictures). There will also be interviews with people who are involved in religious ceremonies, projects to promote the city, and welcoming pilgrims, as well as with local craftsmen. These interviews will provide insight into the spirit of the people of Ise, who have inherited the heart, knowledge and skills of ancient Japan. 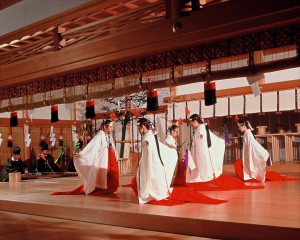 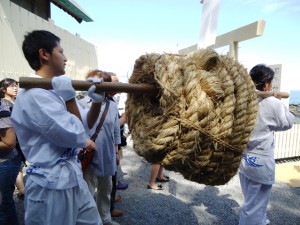 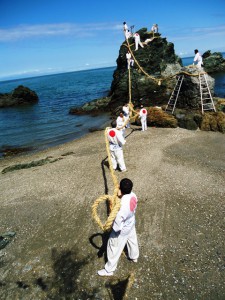 *Shikinen Sengu: At Ise Jingu, once every 20 years a new building is reconstructed, the sacred treasures are renewed and the kami is moved to the new building along with prayers for its power to be everlasting. This 1300-year-old tradition is without compare in the world.

*This press tour is sponsored by Ise City, with planning support provided by the FPCJ.

*Participants will have to cover part of the cost of this press tour, but it is not a profit-making enterprise.

*There will be restrictions on photography during Ise Jingu-related parts of this tour.

Professor Okada currently studies the origin of Ise Jingu, which is closely linked to the establishment of Japan as a state. Last year, he often appeared in the media to explain about Jingu and the Shikinen Sengu.

◎The tour will eat lunch at Daiki, a long-standing Ise restaurant that USA Ambassador to Japan Caroline Kennedy went to in April. Then an expert from Kogakkan University will give an explanation of Shinto, Jingu, Shikinen Sengu and the relation between Jingu and the people of Ise. This will be followed by eating shinsen, food used as an offering to the gods, and an explanation of it.

Ise Jingu is principally composed of the Naiku, where Amaterasu Omikami is worshipped, and the Geku, where the kami of food offerings Toyouke Omikami is worshipped. It also includes 125 other subsidiary Shinto sanctuaries. Following the traditional order, the tour will visit the Geku before going to the Naiku.

1) The Geku and  Sengukan Museum 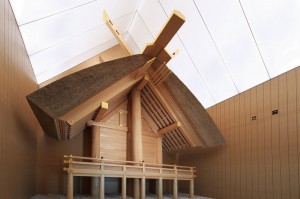 Toyouke Omikami, the kami of food enshrined in the Geku, is worshipped as the kami of rice, the Japanese staple food; of food, shelter and clothing in general; and as the kami of all industry. In the sanctuary of the Geku, fires have been lit, water drawn and food served to the kami twice a day using the same methods for the past 1500 years. The Sengukan Museum at the entrance to the Geku was opened to commemorate the 62nd Shikinen Sengu last year. With a scale model of the Geku main building, displays on how the sacred treasures are made and on the yuitsu-shinmei-zukuri architectural style, this museum provides the opportunity to see the skills of ancient masters up close (Picture above: ©The Sengukan Museum) . 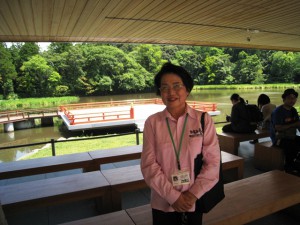 ◎The tour will visit the Sengukan Museum with a curator as a guide. Afterwards, volunteer Ise Jingu guide Ms. Chieko Agata (above, left picture) will take us to the Geku main building, and we will watch mikagura (above, right picture), religious dance dedicated to the kami (*No photography will be allowed of the mikagura).

Amaterasu Omikami is enshrined in the Naiku. According to the Nihonshoki, the oldest history book in Japan, the grandson of Amaterasu Omikami descended from the heavens and became the ancestor of the Imperial Family. It is said that at that time, Amaterasu Omikami gave rice to Ninigi-no-mikoto, her grandson, and told him to use that rice as the staple food for the Japanese people and to build a country where rice would grow well.

Rice has continued to hold a special significance in Japan ever since that time. The Kannamesai, where the first rice harvest of the year is offered up to the kami, is the most important ceremony of the year at Jingu. The food offered to the kami at Jingu is all provided by specific farms, paddies and beaches for that purpose. The Jingu-shinden rice paddies cover about three hectares and several kinds of rice are grown there. This is done to ensure there is always a stable supply of rice available to offer to the gods.

◎A member of the Jingu Administration Office will act as a guide will we visit the Naiku. We will also visit Jingu-shinden, where rice is made to offer to the kami. We will hear about the relation between Jingu, the people of Ise, and rice, and the ceremonies involved in the production of rice.

Proud residents of the land of the gods, carrying on Jingu traditions

Ise has long been considered the domain of Ise Jingu, and the residents have contributed to Jingu. People are proud of helping Jingu, with many Ise residents participating in Shikinen Sengu and other Ise Jingu events. Two examples are Okihiki, when wood is brought to Jingu to be used for rebuilding the sanctuary during Shikinen Sengu, and Oshiraishimochi, where white pebbles are placed on the ground around the new sanctuary. Since these events only occur once every 20 years as part of the Shikinen Sengu, the rice harvested that year is placed on the okihiki-guruma (cart) and brought to be presented to Jingu in the hatsuhobiki festival in order to pass on the necessary skills.

◎The tour will have a dinner chat with members of the Ise Jingu Service Youth Group, composed of locals who participate in ceremonies. We will hear about the ceremonies they participate in them, efforts to pass on skills, and their feelings on Jingu and Ise.

A ceremony to eliminate all impurities, in the land of purification 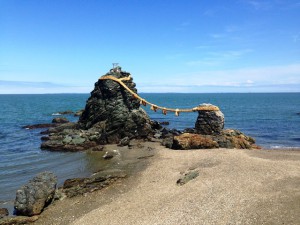 Futamigaura has long been a place where worshippers would purify their body before going on to Ise Jingu. The Imperial princess Yamatohime-no-mikoto, who is said to have enshrined Amaterasu Omikami in Ise, is said to have been so impressed by the beauty of the scenery here that she looked back at it twice, and so it was named Futami (‘twice-look’). The impressive Meoto Iwa rocks fulfill the role of a torii (gates separating the world of kami from the world of humans), and a ceremony is held three times a year to change the shimenawa (ritual rope) connecting the male and female rock. There are five ropes, and each one is 35 meters long, 10 centimeters thick and weighs 40 kilograms. Many spectators come to watch the ceremony, as locals known as ujiko sing kiyari songs as they climb the rocks and wrap the new shimenawa around them. 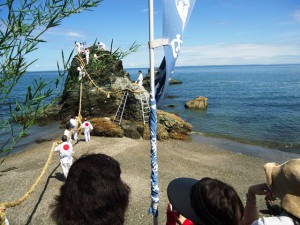 ◎The tour will cover the Oshimenawahari ceremony on September 5. After an explanation from a priest about Futami Okitama Shrine, Meoto Iwa and the ceremony, we will watch and photograph the ceremony. We will also interview local ujiko who participated in the ceremony.

The roots of Japanese hospitality are here!

A town revitalizaed by the leadership of a local company 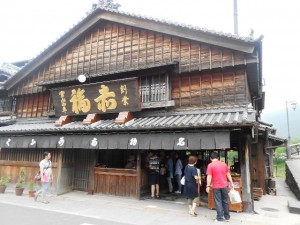 Located in front of the Naiku, Oharai-machi is full of restaurants and souvenir stores, and in the Edo period it was very popular with the two to four million pilgrims that visited every year. In Ise, being welcoming to Jingu pilgrims from around the country was considered a virtue, and so the Ise residents warmly welcomed pilgrims unconditionally in the belief it would make their lives better as well.

However, in the late 1970s the number of yearly visitors to Oharai-machi had dropped to around two hundred thousand. In response to this situation, the Committee for Redevelopment of the Naiku Shrine Town was established by various local companies including Japanese confection company Akafuku, as the beginning of serious efforts by local businesses and residents to improve the town. Akafuku also invested 14 billion yen, the equivalent of its annual sales, into developing Okage-yokocho in a corner of Oharai-machi. With a theme of the late Edo and early Meiji periods, various buildings representative of Ise were moved to or reproduced in Okage-yokocho, and the Isefuku Ltd. company was established to manage Okage-yokocho. As a result of these efforts, in 2010 there were over four million visitors in Okage-yokocho, demonstrating that it has regained its former vitality. 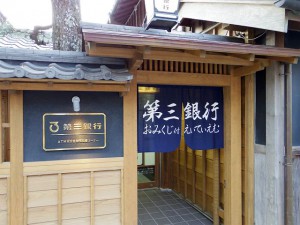 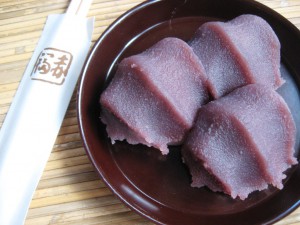 (From left: Bank front made to blend in with surroundings; akafuku mochi, Ise specialty known throughout Japan)

Traditional craft continued to this day thanks to proximity to Jingu

Kamidana, small altars shaped like shrines, are often found in Japanese homes and offices. Ise Miyachu was established over 70 years ago, and makes kamidana that accurately mimic the yuitsu-shinmei-zukuri construction technique used in Ise Jingu buildings. In particular, Ise kamidana are the only ones in Japan where you will see them using Kiso hinoki cypress with a thatched roof, just like the sanctuaries in Jingu.

Born as the eldest son of the family that owned Miyachu, Mr. Yosuke Kawanishi now works as the factory chief. He had no interest in carrying on the family business before he graduated from university, and was pursuing a career in music. However, he returned to Ise due to something his grandfather said, and as he participated in religious ceremonies and developed a closer attachment to the region, he “grew to love Ise more and more.” Now he has also been ordained as a priest, and takes a leadership role in religious ceremonies as well. As a pure Ise citizen, he focuses his efforts on passing on Jingu traditions and the techniques of Miyachu. 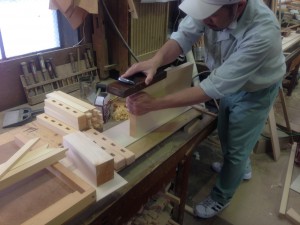 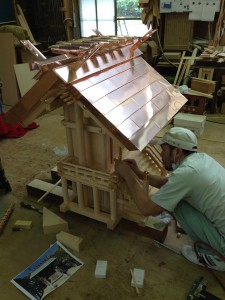 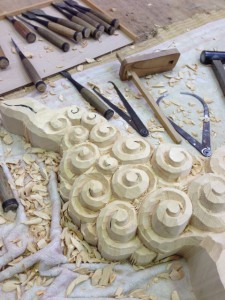 ◎The tour will listen to Miyachu factory chief Mr. Kawanishi explain the unique characteristics of the kamidana made by Miyachu, before watching craftsmen working in the factory.

3. Cost: 13,000 yen per person including transportation, meals and accommodation

4. Participants: Limited to 10 applicants. (Only one reporter and one photographer from each company, but two participants from each TV team will be acceptable.)

(2) FPCJ and Ise City will not be liable for any inconvenience, trouble or accident that might occur in the course of the tour.