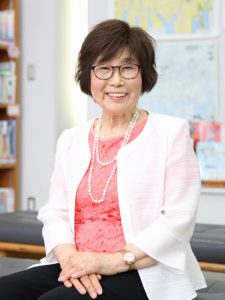 When Ms. Ogura was eight years old and in her second year of elementary school, the bomb was dropped when she was near her home, around 2.4 kilometers from the center of the blast. In 1984, she established Hiroshima Interpreters for Peace (HIP), and by interpreting for foreign researchers and journalists who visit Hiroshima, she has worked to communicate the reality of the atomic bombing to the world. Despite this being the 75th anniversary of the atomic bombing, the COVID-19 pandemic has had a major impact on activities to tell of Hiroshima’s experience, with school trips which would have come from around Japan and events overseas having been cancelled, and memorials being reduced in scale or cancelled.

Ms. Ogura will discuss her current thoughts on the 75th anniversary of the atomic bombing, her hopes for the abolishment of nuclear weapons, and what she would like to tell people as we live during a pandemic.

<Ms. Keiko Ogura’s testimony of her experience during the atomic bombing>

■Members of the Foreign Press:
Please send any questions for the briefer or topics you are interested in to cp@fpcjpn.or.jp by 15:00 on July 22. As there will only be a limited amount of time to ask questions during the briefing, we will collect questions and provide them to the briefer in advance.