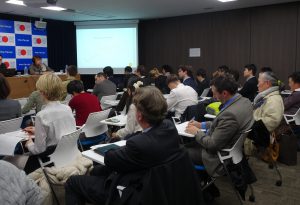 The Rugby World Cup (RWC) is held once every four years. The ninth RWC will be held in Japan from September 20 to November 2, the first time it has been held in Asia. The last RWC, held in England in 2015, had a total of around 2.47 million spectators at its 48 matches, with a total TV audience of 4 billion. Over 500,000 spectators are expected to travel to Japan for this RWC, and it is hoped the tournament will contribute to stimulating local economies, particularly those in the 12 cities matches will be held in.

One of those host cities is Kamaishi, Iwate, which was known as the “City of Rugby” in the 1980s and was seriously damaged by the Great East Japan Earthquake. As part of the reconstruction plan after the disaster, a new stadium was built, and the city intends to demonstrate its recovery to the world through this World Cup.