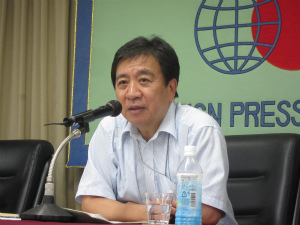 In the run-up to the House of Councillors' election to be held on July 21, political parties have been conducting election campaigns, mainly focusing on such issues as "Abenomics," a constitutional revision and nuclear policies. If the LDP and New Komeito win 63 or more seats, this will change the divided Diet situation and allow Mr. Abe to manage a stable administration. While some predict that the ruling parties may win, people's attention is also focused on the direction of the Abe administration as well as on the election results.

FPCJ has invited Mr. Hiroshi Hoshi, Columnist and Senior Political Writer, Asahi Shimbun, to talk about the "Prospect of the Abe administration after the Upper House Election."