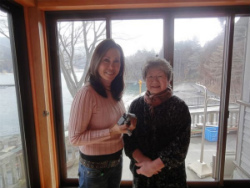 Ms. Susan Hirasuna, Weekend News Anchor/General Assignment Reporter of KTTV FOX 11, a TV station based in Los Angeles, US, visited and covered Japan under the FPCJ Fellowship Program from March 6 to 13, 2012.

KTTV FOX 11 is the FOX network’s affiliate TV station in Los Angeles. It is noted for its focus on the local community and it broadcasts news programs for 46 hours and a half per week. Ms. Hirasuna is a journalist who has won many prizes including an Emmy award.

Ms. Hirasuna spent most of her time in Japan in disaster-affected areas.
After arriving in Tokyo, first she visited the Fukushima Agricultural Technology Center (in Koriyama City)
and then moved to Sendai City, Miyagi Pref. and interviewed two young people who lost a parent in the tsunami and were being supported by Ashinaga, a philanthropic organization supporting such children.
After that she energetically visited many places heavily affected by the tsunami such as Minamisanriku, Kesennuma,
Ofunatoand Rikuzentakata. She filmed scenes of devastation there. She also met and interviewed many citizens there
and covered their human stories.

2. Feature Report
Back home, Ms. Hirasuna made a feature report, editing the footage she filmed with her handy camera in Japan.
It was broadcast on the news program.