Fukushima Prefecture suffered severe damage from the March 2011 Great East Japan Earthquake and TEPCO Fukushima Daiichi Nuclear Power Station accident. The Hamadori area along the Pacific coast in particular still has many residents who have evacuated elsewhere, with only a minority having returned where evacuation orders have been lifted.

Under these circumstances, the Fukushima Innovation Coast Framework was started, a national project to build a new foundation for industry in the Hamadori area. To promote six key projects, including decommissioning; robotics and drones; and energy, environment, and recycling, efforts are being made to attract robotics companies, train personnel, expand networking opportunities, and disseminate information.

The two tours, organized for foreign media in October and for staff members of foreign embassies in November, covered various initiatives to create new industries being advanced under this framework, a trump card for reconstruction, and helped increase awareness of this framework overseas by encouraging reporting on the current state of the Hamadori area by foreign media.

The tour listened to a briefing providing an overview of the Fukushima Innovation Coast Framework and goals of the projects. As specific examples of initiatives, the briefing introduced cutting-edge research facilities such as the Fukushima Robot Test Field (in Minamisoma/Namie) and the Fukushima Hydrogen Energy Research Field (in Namie), one of the world’s largest hydrogen production test facilities, and explained how based on these, efforts were being made to attract industries in fields related to decommissioning, agriculture, forestry, and fishing, and to train personnel. 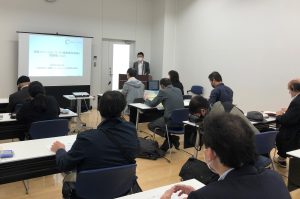 The tour visited the Great East Japan Earthquake and Nuclear Disaster Memorial Museum, which opened in September 2020 to pass on to the future the lessons learned from the complex disaster of the earthquake and nuclear accident Fukushima experienced. After watching an introductory video, the tour was guided by the museums’ vice director and saw footage of the situation immediately after the earthquake and nuclear accident, and the devastation caused by the tsunami, as well as seeing exhibits of a mailbox swept away by the tsunami and a clock which stopped at the time the earthquake occurred. The participants showed interest in each of the exhibits, and listened intently to the tour guide’s explanations. 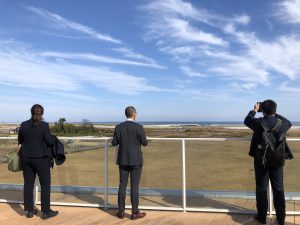 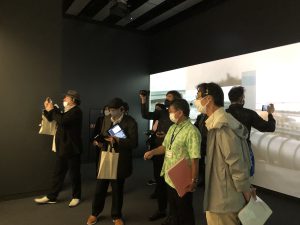 The tour visited the Fukushima Hydrogen Energy Research Field (FH2R), which opened in March 2020 and includes one of the largest hydrogen production facilities in the world using renewable energy. After an explanation from the person in charge of project management, about the FH2R, initiatives for using hydrogen, and future expansion of the project, the tour saw an exhibition space, control systems, hydrogen storage tanks, and a trailer used for transporting hydrogen. At a park on a hill where the entire FH2R facility can be seen, participants took photos and filmed reports with a background full of solar panels. 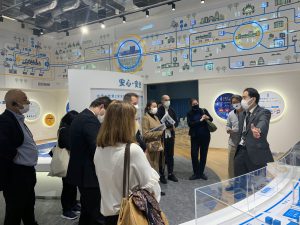 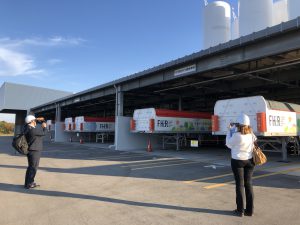 The tour covered Namie Smart Mobility, a proof of concept experiment for on-demand vehicle services to solve transportation issues for people living in and visiting Namie, which Nissan Motor has been carrying out since 2021. First, representative from Nissan gave an overview of this proof of concept experiment for sustainable regional transportation, and then the tour went to JR Namie Station. In front of a large touch panel installed in front of the station, the person in charge of the project explained the convenient car dispatch service which could be used from throughout the town, before demonstrating how the touch panel is used. During this time a local resident who frequently uses the smart mobility service took a taxi to Namie Station, and spoke about problems with mobility in the region and the convenience of this service from the perspective of a user. Turkish and Filipino journalists held individual interviews. Afterwards, participants actually rode in the taxis to Michi no Eki Namie. 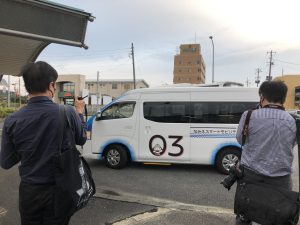 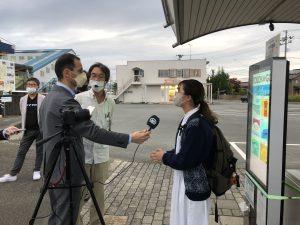 The tour visited NARREC, which began operations in April 2016 as a facility for R&D and experimentation for the remote controlled robots vital to decommissioning the Fukushima Daiichi reactors. NARREC director gave an overview of the facility and its initiatives, followed by the journalists experiencing the virtual reality system allowing for simulations of decommissioning plans. In the test building, the tour saw robots being operated in areas built to reproduce the interior of the reactors, as well as a pool for testing underwater robots for areas which have become flooded from water used for cooling.

During the press tour, the journalists then heard from CLADS vice director about the current state of decommissioning research, and spoke with NARREC technical staff , native of Fukushima, about his experiences during the disaster and why he decided to work with nuclear power afterwards. The journalists asked him many questions about his experience in particular since he had actually experienced the disaster in Naraha. 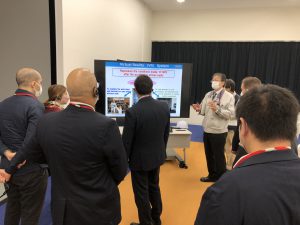 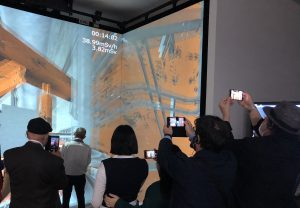 The tour visited the Fukushima Robot Test Field (RTF), a massive development center for land, sea and air field robots, with mock-ups of disaster and infrastructure environments robots would actually encounter allowing for performance evaluations of robots and training in their operation. RTF vice director explained the concept of the RTF, what led to its creation, how the robotics industry is gathering in the area, and the companies and research institutes with offices in the RTF lab building. The group then went to the roof of the lab building, where they could see the facilities and control center of the RTF, with a size of approximately 1,000 meters east to west and 500 meters north to south. The participants took many photos and videos from the roof, where the entire field could be seen, as well as asking the vice director a number of questions. 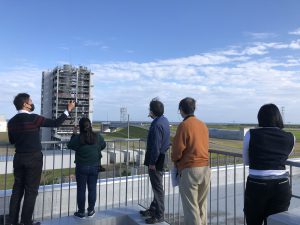 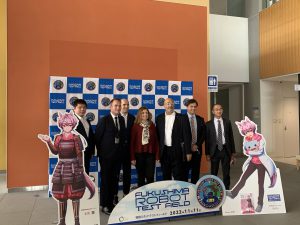 The tour visited Robotcom and FA.com, a company which opened a “smart factory” in Minamisoma in June 2016. The factory incorporates the latest technology, and the company has made it a center for developing partially-finished robots, performing special-order processing with short turn arounds, and training skilled workers. The tour heard from the manager about the company, why it built a factory in Minamisoma, and the current state of manufacturing in Japan, followed by seeing machine parts made using 3D printers and touring the facilities in the factory. The participants showed great interest in covering these large machines. 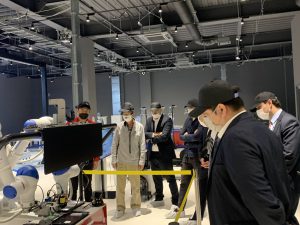 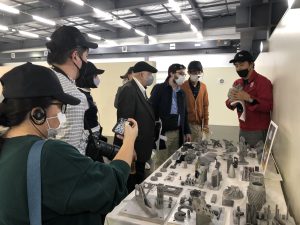