This press tour visited Oita and Kumamoto in Kyushu, covering the over 300-year-old Hita Gion Festival and Kumamoto Prefecture’s “creative restoration” from the 2016 Kumamoto earthquakes. The tour included the restoration of Cultural Properties at Aso Shrine and Kumamoto Castle, craft beer made using local agricultural projects that started after the earthquakes, and an agricultural promotion project formed by a collaboration between Koshi City, local businesses, and a power company specializing in renewable energy.

A total of eight journalists joined the tour, from media based in China, Denmark, Hungary, Hong Kong, and Vietnam.

* This tour was organized by the Kyushu Tourism Promotion Organization and planned and operated by the FPCJ.

The Hita Gion Festival in Hita, Oita has been held for over 300 years in order to pray for protection from disasters and disease, and was one of 33 festivals throughout Japan added in 2016 to the UNESCO Intangible Cultural Heritage List as “Yama, Hoko, Yatai, float festivals in Japan.” The centerpiece of the festival is nine elaborately decorated floats up to ten meters tall. At the Hita Gion Yamaboko Kaikan, the journalists interviewed Mr. Toshio Goto, 97 years old and the chair of the Hita Gion Float Promotion Society; and Mr. Shizuo Nagashima, Hita’s only doll maker, who makes the dolls which decorate the floats. Questions included what the locals thought of the Hita Gion Festival, whether there had been more tourists after being added to the UNESCO Intangible Cultural Heritage List, whether the way the festival was held had changed over the years, how the festival was different from Kyoto’s Gion Festival, and whether young people who had left Hita came back for the festival.

The tour then visited Mameda, one of the eight towns that make floats for the festival, which still has many buildings remaining from the late Edo and early Meiji periods. Before heading to the group showing of all the floats, the journalists asked about the weight and height of the floats, and asked elementary school students about their reasons for participating in the festival.

The floats were brought into the square in front of JR Hita Station one by one, with all their lanterns lit at the same time once all nine floats were lined up. The journalists were able to move around freely and film and photograph the elaborate spectacle of this group showing of the floats from a variety of angles. 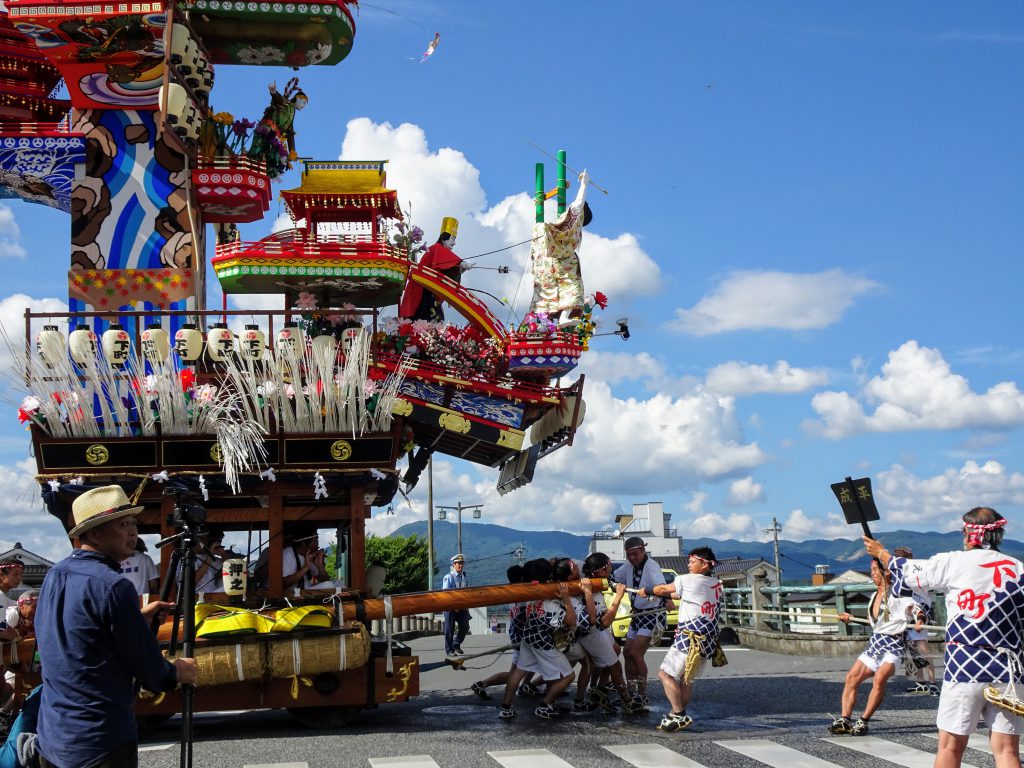 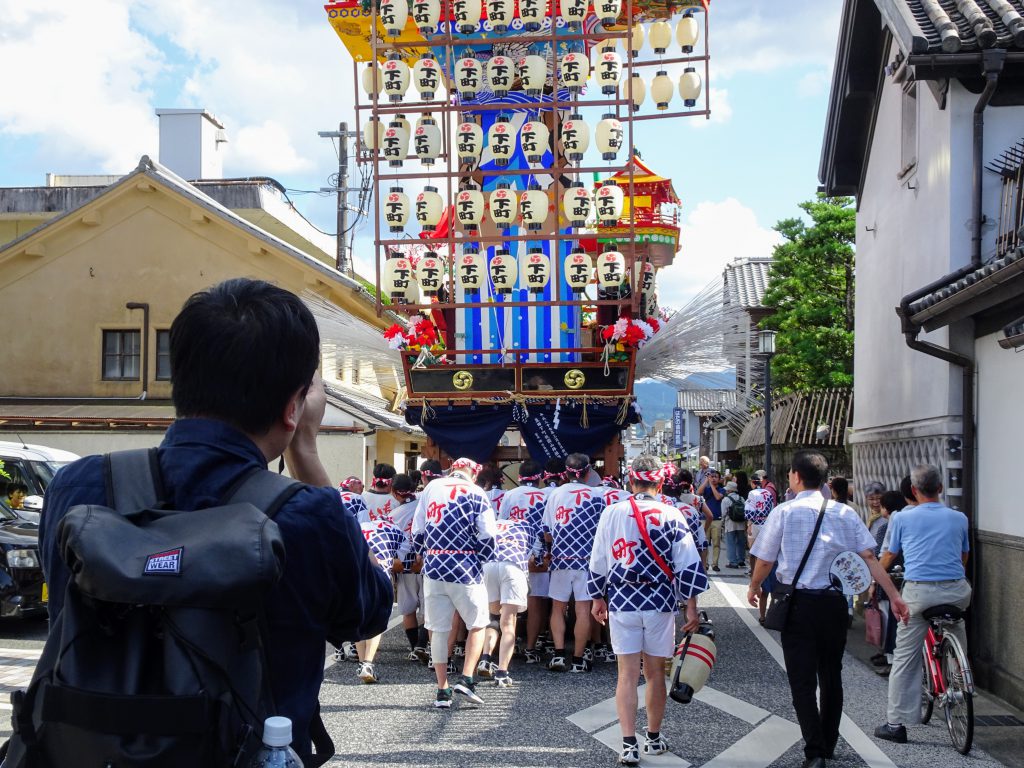 Aso Shrine suffered significant damage from the earthquakes, with the worship hall collapsing, as did the two-story, 18-meter high romon (one of Japan’s Three Great Romon), as well as damage to other structures. The five-year project to restore the romon will begin this August, and by using a new method for construction it is expected about 70% of the original material will be able to be reused. While filming and photographing the shrine grounds and the storehouse for the original materials, the journalists asked questions about Japan’s basic stance on reusing the original materials when restoring Cultural Properties, whether the repairs would include measures to help prepare for future disasters, and whether local residents had any opinions or complaints about the restoration methods being used. 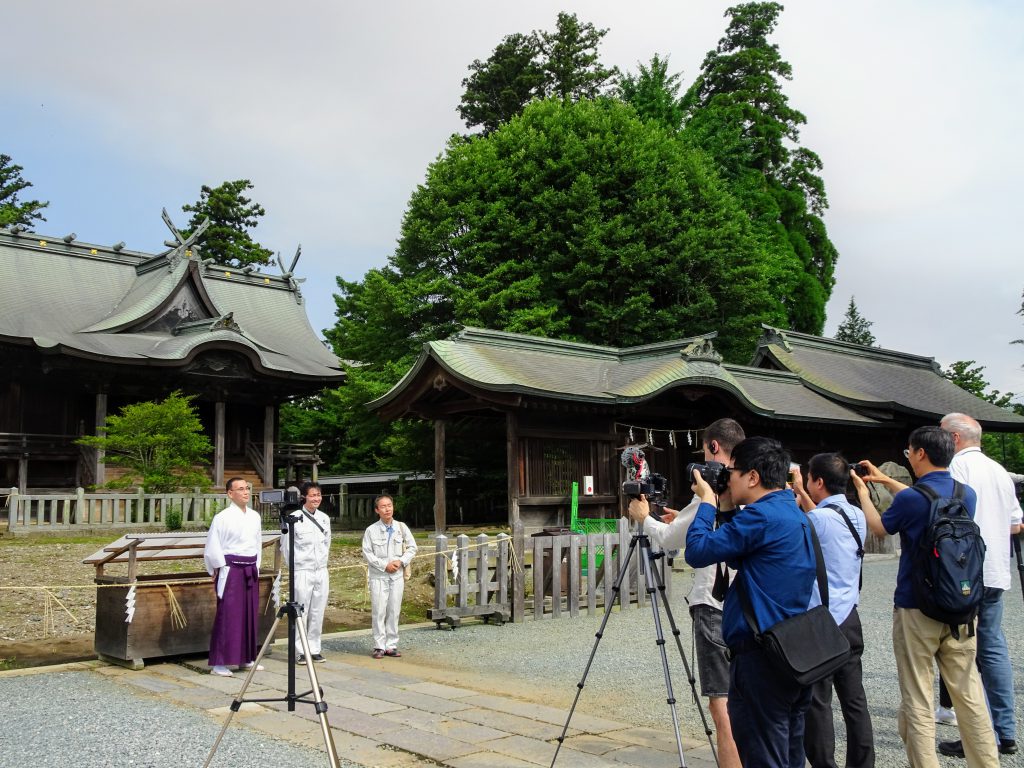 With around 100,000 of the stones making up Kumamoto Castle’s stone walls having fallen in the earthquakes, approximately 30% of the 79,000 square meters of stone wall need repairs. The journalists received an explanation of a system developed by Kumamoto University and other collaborators to automatically identify where stones were used in the wall using photos of the fallen stones, then walked around the outside of the castle’s moat filming and photographing the reconstruction work being carried out on the collapsed stone walls and the main tower. The journalists asked questions about the progress of the reconstruction work and how many workers were involved, whether some material was used to join the stones together, and what was done if the stone itself was damaged when using the automatic identification system. 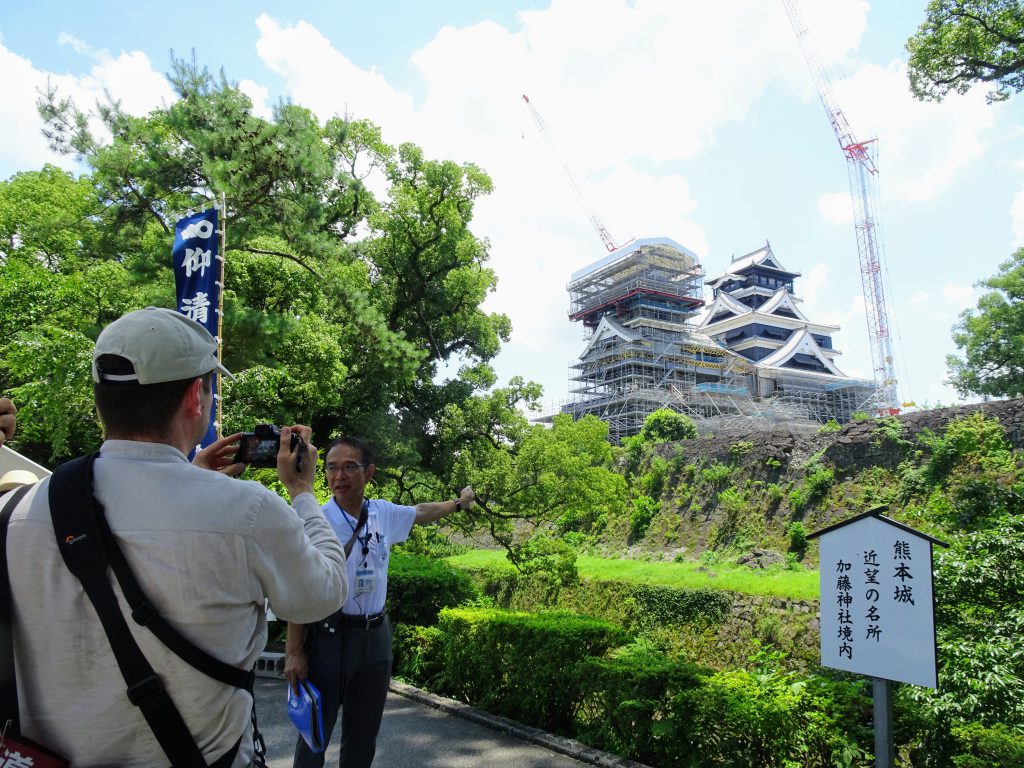 Mr. Kabashima gave a presentation on efforts to carry out a “creative restoration” and make things better than they were before the damage from the earthquakes, while hurrying to restore infrastructure and rebuild homes for the people affected. Afterwards, the journalists asked questions about whether the governor thought other local governments could benefit from using Kumamoto’s reconstruction policies for reference, if there were any reconstruction projects using the latest technology such as AI, whether the prefecture had any measures in place to protect the rights of foreigners considering the revised immigration law, and whether there were any plans to further promote the appeal of Kumamoto to Chinese tourists. 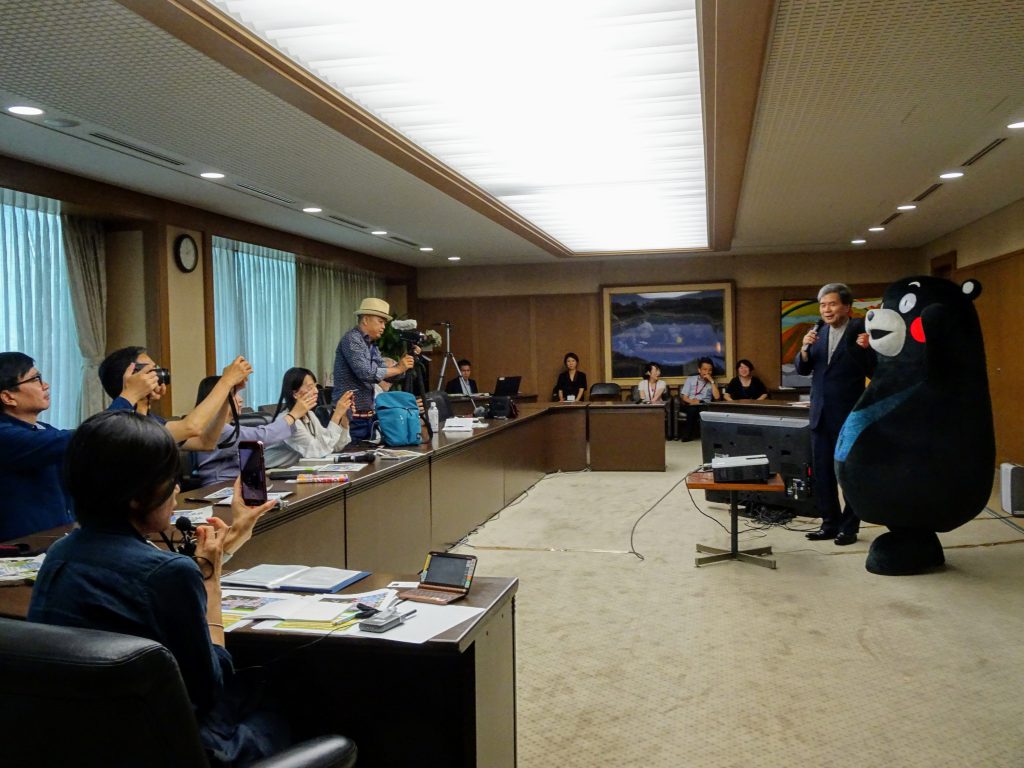 The City of Koshi, Kumamoto Flour Milling (a local company) and a subsidiary company of Shizen Energy (a power company specializing in renewable energy such as solar power) provide some of the dividends and proceeds from electricity sales from running this solar power station to help support agriculture in Koshi as part of the Koshi Agriculture Vitality Project. 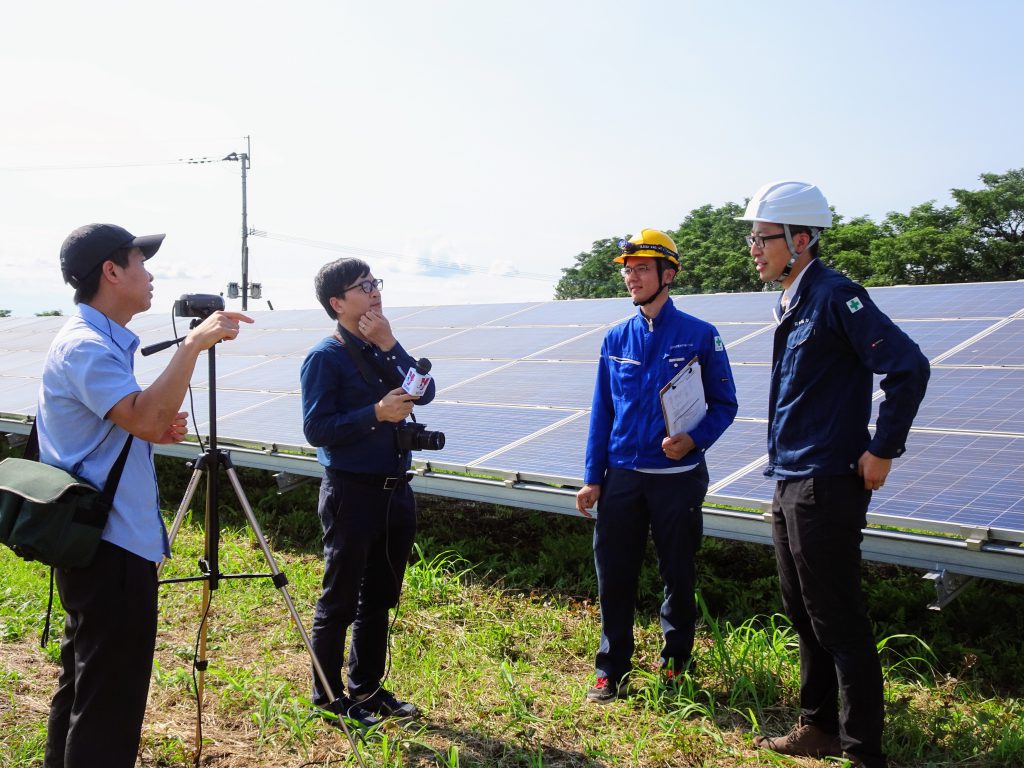 At Brewery Kaen, a restaurant run by Mr. Kashima, the journalists interviewed Mr. Kashima, Shizen Energy’s Solar Development Dept. General Manager Takayuki Kasama and Mr. Kota Takao (in charge of the project to return profits to the community), and Koshi Vice-Mayor Yoshinari Hamada, followed by seeing the small brewery attached to the restaurant. The journalists asked questions including Mr. Kashima’s motivation to begin brewing beer and the amount of investment into the solar power station. The group then ate a meal made using local ingredients and tried some original craft beer made using ingredients such as watermelon and citrus fruits. 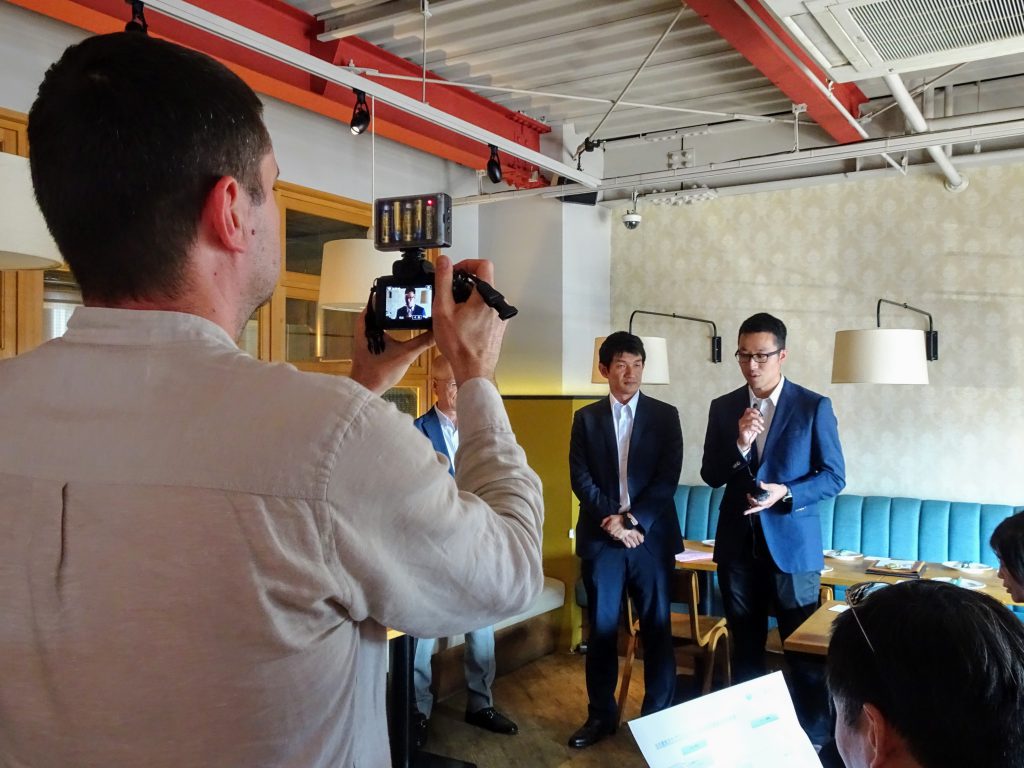