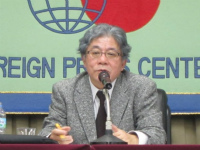 FPCJ invited Dr. Masao Okonogi, Research Professor, Kyushu University, to speak on the theme of “2012 on the Korean Peninsula and Japan.” A total of 27 people including 12 foreign press reporters attended.

“We need to look at North Korea in 2012 with attention to the change of the world system,” Dr. Okonogi said at the outset, and started his briefing as summarized below.

1. Since the ceasefire of the Korean War, the Cold War regime has remained in the Korean Peninsula as an institutionalized division (“division regime”) where neither war nor unification is possible. Under the regime, North Korea has repeatedly made provocative actions not leading to war, such as armed provocations and sabotage, with the bombing of a KAL airliner in 1987 the last case.

2. After the end of the Cold War, North Korea was faced with crises of the regime because of the collapse of the socialist camp, the crash of the domestic economy, China’s recognition of the South Korean government, and the death of North Korea's founder, Kim Il-sung. For the past 20 years, for survival, North Korea has stuck to a socialist regime, using the cases of East Germany and the Soviet Union as a lesson, and has also continued nuclear and missile development.

3. North Korea is irritated with the stalemate caused by the so-called conditional engagement policy of the US President Barack Obama and South Korean President Lee Myung-bak. The sinking of a South Korean patrol vessel and the shelling of the South Korean island of Yeonpyeong, both in 2010, were Pyongyang’s actions to make a breakthrough.

4. Why could North Korea restart armed provocations suspended for 20 years under its own regime crises? We can point out a new environment (system change) favorable to the North which has happened in the past few years. (1) Progress in North Korea’s nuclear program, including the accumulation of plutonium and the development of uranium enrichment. (2) China's emergence as a superpower. (3) Progress in North Korea’s power transition, shown by the public debut of Kim Jong-un as the successor at last year’s Workers’ Party convention. Some analysts argue that the North is on the verge of regime collapse, but the situation is even getting better for regime maintenance.

5. The Korean Peninsula of 2012 is very difficult to predict. In 2012, North Korea will celebrate Kim Jong-Il’s 70th birthday in February and the centenary of Kim Il-sung’s birth in April, while the United States and South Korea will hold presidential elections in November and December respectively. Special attention is needed during the period after the North’s festive season and the US and South Korean presidential elections. If dialogue fails to resume before April, Pyongyang might, without other options, resort to a nuclear test or armed provocation prior to the elections to impress the potential leaders of the two countries that they cannot live without negotiations with the North.

6. In the big picture, North Korea will not stop nuclear development or armed provocation unless a comprehensive peace process is in place. Moreover, as long as North Korea is North Korea, it will never give up its nuclear development program even if it temporarily freezes the program and puts it under international monitoring. To have the country give up its nuclear program, therefore, it is important to promote regime change. The only possible way is to force the country to accept the transition to a market economy with the help of China.