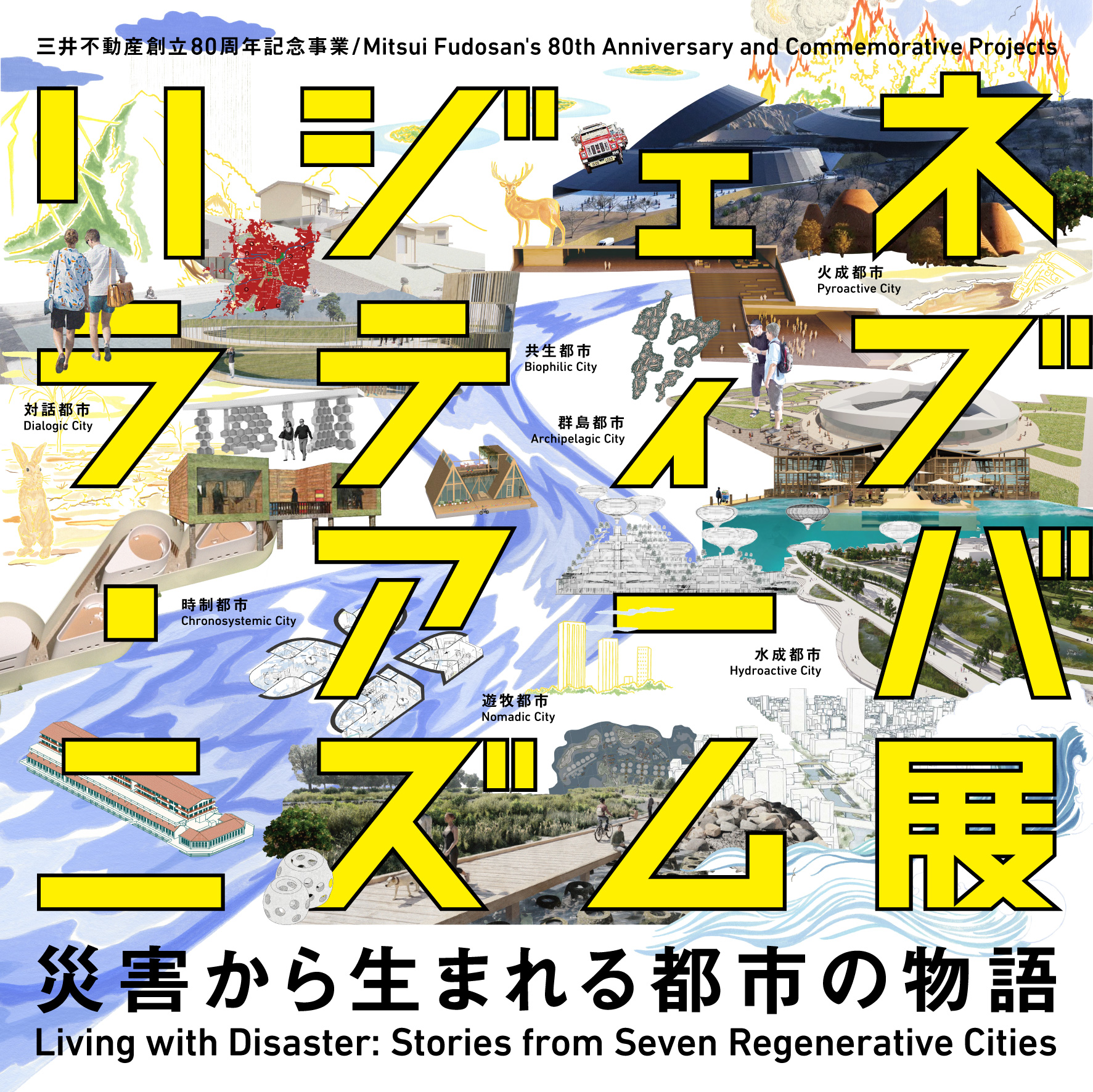 Eleven universities around the world, led by the xLAB at UCLA and the International Research Institute of Disaster Science [IRIDeS] at Tohoku University, present disaster-responsive architectural and urban design.

Next year, 2023, is the 100th anniversary of the Great Kanto Earthquake that hit Tokyo and its surroundings in 1923. Tokyo's urban structure has changed dramatically since the earthquake. “Sendai Framework for Disaster Risk Reduction 2015-2030”, an international disaster risk prevention agenda, aims to enhance disaster risk prevention capabilities by 2030. At ArcDR3, we have discussed the possibilities of how to respond to disasters in the area of urban and architectural design. This exhibition showcases the results of ArcDR3, an international collaborative project.

Web Site: https://www.regenerativeurbanism.org
*The exhibition is scheduled to tour to Japan House Los Angeles in the United States in October 2022.

■About Exhibition
Eleven years have passed since the Great East Japan Earthquake. In the coastal areas of Tohoku, which were devastated by the massive earthquake, tsunami, and nuclear power plant accident, urban development is still underway for reconstruction. Not only in Japan, but also in various regions of the world, conflicts arising from the overlap between natural ecosystems and human habitats have become serious disasters that threaten human livelihoods.
Four years after the disaster, the United Nations World Conference on Disaster Risk Reduction was held in Sendai, the closest major city to the earthquake’s epicenter. This conference inspired many subsequent initiatives to share and apply lessons learned from the Great East Japan Earthquake on a global scale to create disaster-resistance environments. One of these initiatives is the ArcDR3 global platform, a collaboration focusing on disaster-resilient architecture and urban design involving 11 universities along the Pacific Rim and together with APRU.
This exhibition, which discloses the results of ArcDR3 activities over the past 3 years presents Regenerative Urbanism, an alternative concept of urban design that responds to various disasters and introduces a series of optimistic and innovative design proposals.

Stories from Seven Regenerative Cities by 11 Universities
This exhibition proposes seven imaginary cities that have been created by combining various urban designs proposed by 11 universities participating in the ArcDR3 Initiative. The stories of seven regenerative cities is a paradigm of Regenerative Urbanism based on research from cities and disasters around the world.
The seven cities: Archipelagic, Biophilic, Chronosystemic, Dialogic, Hydroactive, Nomadic, and Pyroactive are a mosaic of Regenerative Urbanism created by this global collaboration toward an alternative future for the Pacific Rim. Importantly the proposals do not merely reflect reactionary and defensive planning and design strategies but, in courageously embracing inevitable disaster cycles through anticipatory techniques, they demonstrate the possibility of new symbioses between humans and the natural and constructed worlds. In doing so, Regenerative Urbanism frames renewed possibilities for ecological and sociological ethics, ensuring that we not only survive threats but thrive both with and despite them.

Urban Futures Displayed in Seven Wells
The ‘wells’ in the exhibition hall describe seven cities, each with unique climate conditions and disaster risks. These imaginary cities do not represent any single existing city; rather, these imaginary cities are emblematic of the climatic conditions and disasters that ensue various regions such as coastal lowlands, arid deserts, and forested mountain zones.
These stories are correlated with actual damage caused by storm surges, floods, wildfires, and droughts around the world.
The seven wells are an experiential device for urban design that conveys the practice of Regenerative Urbanism by describing various aspects of cities that can flexibly respond to disasters and adapt to harsh natural environments.
Based on real disasters, climatic conditions, and geographical characteristics, these seven wells evoke potential cities of the future who have, not only survived but thrived, amidst dramatically changing environments.
As you tour the exhibition, combine the images and keywords to envision future cities beyond these wells that are: resilient, symbiotic, collaborative, prepared, smart, and comfortable.

■Manifesto for Regenerative Urbanism
Regenerative urbanism is an updated paradigm of resilience in urban design. Prompted by a rapid increase of nature-instigated disasters and climate change, this paradigm asks us to approach urban resilience, not as the defensively-inclined maintenance and sustenance of as much as possible of the present and its restoration after a disaster. Instead, regenerative urbanism asks us to think differently, to imagine a near future that embraces and incorporates risk to create safer ways of addressing disasters both during and after they strike but, even more importantly, to create innovative approaches to urban development in between those times to lessen the severity of inevitable disastrous occurrences. To this end, regenerative urban design strategies are conceived as mitigatory and anticipatory with ideas of adaptability, flexibility, mutation, and symbiosis embedded in their methods and techniques to ensure the unfolding of more robust, balanced, and just societies.

■Tohoku University and the International Research Institute of Disaster Science [IRIDeS]
Founded in 1907 as the third national university in Japan, Tohoku University is celebrating its 115th anniversary in 2022. This year also marks the 100th anniversary of its transformation into a general university after the establishment of the Faculty of Law and Literature in 1922. Designating the year 2022 as the "115th anniversary of its founding and 100th anniversary as a general university," Tohoku University is carrying out various projects from January 2022 to April 2023 to deepen ties with alumni in Japan and around the world and renew its commitment to serve society by working on breakthroughs in knowledge and understanding.
Additionally, IRIDeS is celebrating its 10th anniversary this year as a research institute established at Tohoku University in the wake of the Great East Japan Earthquake. IRIDeS is presenting the fruits of its efforts in the past ten years and demonstrating its commitment to continue contributing to the recovery and reconstruction of disaster-stricken areas in the coming years, carrying out some of the world's most advanced research on natural disaster science in collaboration with universities and research institutes in and out of Japan.

■About Mitsui Fudosan’s 80th Anniversary and Commemorative Projects
The Mitsui Fudosan Group’s ESG philosophy is based on the group’s aim to help establish a society that enriches both people and the planet under the principles of coexisting in harmony with society, linking diverse values, and achieving a sustainable society.
In a world seeing more frequent and severe disasters, including the effects of climate change and the COVID-19 pandemic, Mitsui Fudosan Co., Ltd. supports ArcDR3’s vision of regenerative urbanism, and is pleased to be able to participate in this exhibition as a special sponsor, as part of the company's 80th Anniversary and Commemorative Projects.
At the exhibition, Mitsui Fudosan will also showcase Watasu Nihonbashi, a corporate initiative based on the group’s principles.

Watasu Nihonbashi
A center in Nihonbashi, launched by Mitsui Fudosan to provide a place in central Tokyo to communicate information and act as a bridge to the Tohoku region. After the Great East Japan Earthquake, one of our employees started visiting the town of Minamisanriku in Miyagi Prefecture to work as a volunteer. Others joined, and our growing social interaction with the people of Minamisanriku led to the launching of the center in 2015, headed by volunteers who hope to keep being involved.
Bringing people closer together under the concept of “A Bridge Between Hearts, Minamisanriku and Nihonbashi, People and Future,” this is a place where people can learn from survivors who moved forward after the disaster. It serves as a bridge connecting people's hearts and widening the circle of happiness.
Living with disasters, not fighting against them is the concept for ArcDR3. The lives of people from Tohoku, from whom we have learned so much since the catastrophe, provide us with a model of this concept.
Web Site: https://www.watasu.net/

■About the Symposium
The symposium has invited architects and researchers representing the eleven universities participating in the ArcDR3 initiative to the ArcDR3 Forum Vol.4 "New Visions for Regenerative Urbanism" to be held online. Parallel to the main program, experts practicing or undertaking initiatives in the field of disaster risk reduction will discuss new forms for cities that are resilient to disasters and that exist harmoniously with nature. The SMALL TABLE/BIG TABLE format builds on the unique know-how of experts to encourage active and creative discussions, instead of the typical consensus building with predetermined outcomes.

*The access link and other details of the symposium will be posted on the website at a later date
Web Site https://www.regenerativeurbanism.org

■SDGs: Sustainable Development Goals
The SDGs, the Sustainable Development Goals, are international goals that aim for a sustainable and better world by 2030, adopted at the United Nations Summit in 2015. It consists of 17 targets and 169 targets, and requires that various entities work together.
In this project, we are particularly conscious of our contribution to "Goal 11: Make cities and human settlements inclusive, safe, resilient and sustainable."