Local revitalization by creating extra value! The Ehime brand– the pride of Japan- 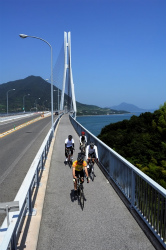 The natural beauty of the Seto Inland Sea coupled with a majestic bridge combine for an impressive view with the Shimanami Kaido, which links Honshu to Ehime Prefecture in Shikoku. The warm weather and plentiful water helped develop the agriculture and manufacturing industries, with Ehime towels and iyokan known throughout Japan.  But with continued globalization leading to price wars with imports, local industries are faced with the need to change from a production style focusing on low cost and quantity.

In response, local branding has been gaining steam as a way to revitalize communities with the appeal of unique features of the region by developing local resources and specialties into brands. Although the sudden increase in imported Chinese towels almost led to the local industry disappearing completely, strategic branding revived the Imabari towel industry. Uwajima farmed sea bream is said to be better than wild fish, thanks to advanced farming techniques. Efforts by local government and NPOs to revitalize the region using bicycles have led to the Shimanami Kaido becoming known as a  "Cyclists’ Sanctuary.” These local brands from Ehime are enchanting people not only in Japan, but around the world.

This press tour will cover Ehime brands, including Imabari towels; Taiichiro-kun, the most expensive farmed sea bream in the world; and Shimanami Kaido, a cycling paradise. In particular, the focus will be on how to succeed at local branding, which continues to be popular in Japan and is seen as the key to revitalizing local economies.

*This press tour is jointly planned and sponsored by Ehime Prefecture and the FPCJ.

*Participants will have to cover a portion of the cost for this press tour, but it is not a profit-making enterprise. 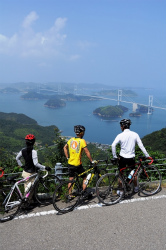 The Shimanami Kaido connects Ehime and Hiroshima prefectures and is about 70 km long. Its most attractive feature is the option to ride a bicycle across the sea. The view of the Seto Inland Sea seen while cycling is breathtaking, and this has become a cycling road that many cyclists want to ride on at least once. There have been increasing numbers of foreign visitors recently, and Cycling Shimanami, one of the largest international cycling events in Japan, will be held in October. Currently, they are accepting applications from around the world. (Event website：http://cycling-shimanami.jp/english/） 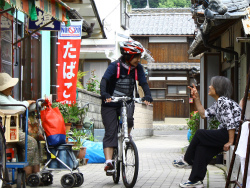 This nonprofit organization was established in 2009 with its headquarters in Imabari. Their goal is to stimulate the region by promoting bicycle touring. In addition to running guided tours and making cycling maps, they are involved in a variety of other projects to make bicycle touring enjoyable. These include Shimanami Tousou Rescue, which helps with problems like flat tires, and Shimanami Cycle Oasis rest stops where cyclists can interact with locals. This NPO has even influenced governments and corporations in its efforts. For example, thanks to cooperation from Ehime Prefecture and Shikoku Railway Company there are now Cycle Trains, which allow bicycles without requiring packing, and tandem bicycles for two which were banned due to traffic regulations are now allowed, so that people with visual or other impairments can enjoy cycling. According to President Yuko Yamamoto, the number of rental bicycles in Imabari has increased steadily in the last few years, creating a visible difference on islands where the population had been aging and decreasing until then. 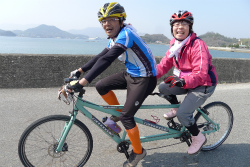 *The tour will hear from President Yuko Yamamoto about the founding of CycloTourisme Shimanami and what activities they are involved in, and then go “pottering” (Japanese term for leisurely bicycle touring) on the Shimanami Kaido. This will include a stop at the Oshima Shimanami Cycle Oasis lunch spot to interact with locals.

Promoting Ehime through top sales, with the slogan of “New Bicycle Culture” 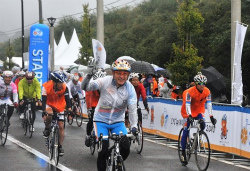 While campaigning for the 2010 gubernatorial race in which he was first elected, Governor Nakamura promised to promote the Shimanami Kaido worldwide. Starting with cooperative relationship he established with Giant, the world’s largest bicycle manufacturer, by visiting Taiwan himself after taking office, he has been actively working to make the entire prefecture a cycling paradise. Currently he is working on his plan to make cycling roads throughout Ehime. The plan is to develop a total of 1270 km of cycling roads in the prefecture over the next five years, and attract cyclists from around the world.

[Governor Profile] Born in Ehime in 1960. Graduate of Keio University. Worked at Mitsubishi Corporation until being elected to the Ehime Prefectural Assembly in 1987. Took office as Mayor of Matsuyama in 1999. Elected as Governor of Ehime Prefecture in 2010. Currently in his first term.

*The tour will hear from Governor Nakamura about his efforts on revitalizing the local community with bicycles, from his meeting with King Liu, chairman of Giant Manufacturing in Taiwan, to the hosting of an international cycling event. He will also speak about his concept of New Bicycle Culture and the cycling event scheduled for October.

Having survived a slump, this Japanese brand is expanding globally

Imabari’s towel industry is over 100 years old, but a sudden increase in imported towels from China pushed it to the brink of collapse. After production peaked in 1991 it decreased for 18 years in a row, until in 2009 it was only one-fifth of the peak quantity. At one time there were over 500 manufacturers, but over 70% of them went bankrupt or shut down.

However, it was this crisis that led rival towel manufacturers to join forces. In 2006, the Ministry of Economy, Trade and Industry chose Imabari towels for a JAPAN Brand Project, and the brand development project started, led primarily by the Shikoku Towel Industrial Association (pictured: Governor Seiji Kondo) formed by towel manufacturers.  After choosing “safe, reliable, high quality” as the concept for Imabari towels, 11 original brand quality standards were made. Only those products that clear all 11 standards are permitted to use the brand logo. The logo was designed by art director Mr. Kashiwa Sato, who also designed the Uniqlo logo. After using an Imabari towel, Mr. Sato was impressed with how pleasant it was to use, and so decided to join the project. With cooperation from Mr. Sato, the Association also made a sales strategy for metropolitan areas: selling towels for more than 10,000 yen at Isetan, the famous

department store. As a “luxury towel made using excellent material,” it sold well. In 2012, the Association opened an Imabari Towel shop in Aoyama, Tokyo. It was an immediate success, with sales significantly surpassing targets. Next, they plan to move into foreign markets. After participating in an international trade show in London in September this year, Imabari Towels will be sold in Birmingham in February next year.

In order to train advisors who can help customers select the right towel to meet their needs, the Association introduced the Towel Sommelier qualifying exam in 2007. With the increased popularity of Imabari towels, 2012 had more applicants for the test than ever before and the total number of towel sommeliers grew to over 1000. 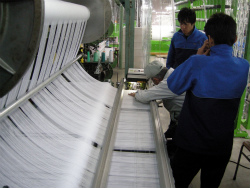 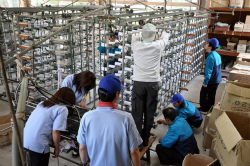 Better than wild sea bream! “The most expensive farmed fish in the world” 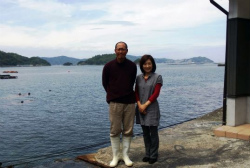 Ehime Prefecture produces the most farmed fish in Japan, and Uwajima in southern Ehime is well-known for farming both fish and pearls. There is a type of red sea bream farmed in this city that is said to be the most expensive in the world. The brand name of that fish is Taichiro-kun. These fish are farmed by Tokuhiro Suisan, a local fishery company run by Mr. Taichiro Tokuhiro and his wife. The impetus for developing Taichiro-kun was being told by a chef that “Farmed fish have a unique unpleasant smell, and aren’t fit for cooking.” After 13 years of trial and error, Mr. Tokuhiro decided on improved feed. Using an original feed made of a blend of more than 40 ingredients, it was possible to farm fish that even compared to wild sea bream has excellent flavor, very little smell, and keeps well. They also farm the fish in an environment designed to help the fish avoid stress, and say hello to the fish every morning. Restaurants and wholesale traders alike are impressed with the quality of lovingly-raised Taichiro-kun. 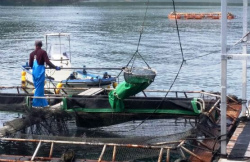 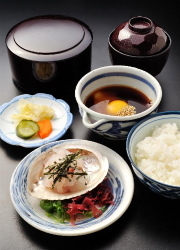 *The tour will visit the fishery where Taichiro-kun is farmed, and President Taichiro Tokuhiro will discuss developing Taichiro-kun. Fresh Taichiro-kun sashimi will be available for tasting. Uwajima’s famous tai meshi, made using Taichiro-kun, will be served for lunch at a traditional Japanese restaurant.

Dogo Onsen in Matsuyama, Ehime is the oldest hot spring in Japan. The Dogo Onsen Honkan building, a highlight of sightseeing in Matsuyama, celebrated the 120th anniversary of it construction on April 10, 2014. To commemorate this occasion, Matsuyama’s hot spring town is holding the Dogo Onsen Art 2014 festival. Artists from Japan and around the world are displaying their artwork throughout the Dogo Onsen area (see http://www.dogoonsenart.com/ for details).

*The tour will view artworks on display in the hot spring town, with Onsen Art staff as a guide. There will also be the opportunity to view and photograph the inside of the 120 year old Dogo Onsen Honkan building (after 11 PM, exclusive reservations for photographs are available!) This section of the tour is only for those who are interested. 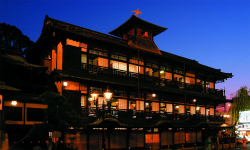 3. Cost: 20,000 yen per person including transportation, meals and accommodation
* FPCJ will later inform the participants of methods for payment, cancellation fee etc.

(1) There may be some restrictions on photographing and filming at the tour sites. Please follow the instructions of the officials on duty.
(2) FPCJ and Ehime Prefecture will not be liable for any inconvenience, trouble or accident that might occur in the course of the tour.